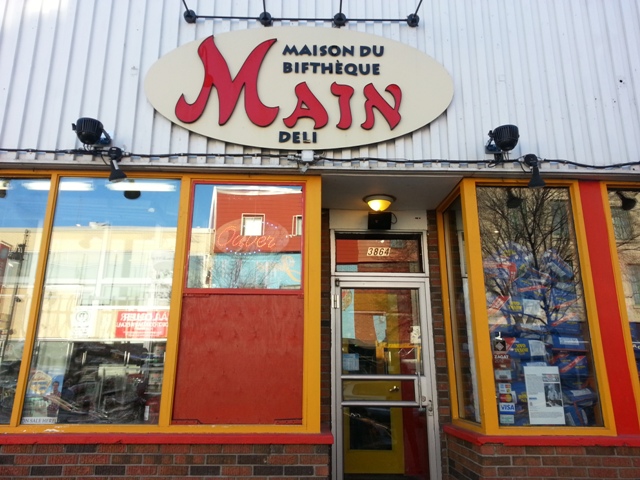 I have to admit it: while Schwartz deserves its reputation as having the best smoked meat in the universe, I’ve always preferred dining across the street at the Main.

No line-up, roomy diner-style booths, a liquor licence and, what’s more, the menu features great old-fashioned Hebrew comfort food such as matzoh ball soup and latkes. The Main was established in 1974 by Peter Varvaro and moved to its present location, at 3864 St-Laurent, in the early ’80s. I’ve been a regular since working summer jobs as a teen at the old Warshaw’s. The food has remained remarkably consistent over the decades, even after Mr. Varvaro passed away in 2013.

However, since its sale earlier this year, the unthinkable happened: the Main stopped smoking its own meat. It wasn’t so obvious at first — black-rimmed unnaturally pink briskets began appearing in the window display along the spice-encrusted originals. The first order of pink pastrami-style meat that was served to me was jarring — it was instantly clear that this was not the usual smoked meat. A sampling of the lox plate showed that the salmon was also no longer smoked in-house, losing its melt-in-your-mouth texture and unique flavour.

Change is not something one is used to at such an institution — the mind reels at the mere thought of seeing a lettuce leaf in a Wilensky Special, for instance. I knew that the Main had been sold, but who would buy a legendary smoked meat joint and then ditch its smoked meat?

New owner Orlando Cardemil assured me that the smoked meat situation is temporary — he has big plans for a revamped Main that will serve as a model for a new restaurant franchise. Cardemil has experience in this, having been part of the team that developed the Donini pizza franchise in the 1980s. The Main’s old smoking equipment is being replaced with new smokers in 2015, and the meat will be raised on his own farm. He’s promising organic meat with no chemicals (although he did not rule out nitrites when I asked him about these). The rye bread will even be replaced with gluten-free bread!

Caesar and chicken salads have already made their appearance on the menu, ending the era where if one wanted vegetables with your meat plate, they had to be pickled. The woman who’s been making their Hebrew delicacies all these years is still on staff, so at least for now, you can enjoy the same varenekes, latkes and in my opinion, the best garlicky coleslaw in Montreal. Cardemil was vague when I asked him if these dishes would survive the move to a gluten-free organic restaurant.

“You can’t get rid of that woman in the DVD!” I implored, referring to Birth of the Smoked Meat, the great 2006 documentary about the Main directed by Jeanne Pope and Zoe Mapp. “We don’t sell that DVD anymore,” he answered, which was certainly appropriate given the changes afoot.

At least the (old) Main’s recipes live on in the two restaurants opened by Varvaro’s children, Philip Varvaro’s Delibee in Pointe Claire and Peter Varvaro Jr.’s Smoke Meat Pete in Ile Perrot. Their coleslaw and Hebrew items are not quite as good as what that magic woman at the Main still prepares, but both restaurant’s smoked meat is about as identical to the old Main’s as you can get.

The irony, of course, is that one of the most iconic dining experiences to be had on St-Laurent Boulevard now lives on in deep, deep suburban Montreal. The “new Main” with its free-range smoked meat may succeed in blazing a wholly unexpected trail in healthy delis, but even if it does, a more diner-like alternative to Schwartz’s feels essential somewhere in the neighbourhood that gave birth to it. The street called the Main is just not quite the same without its namesake deli. ■