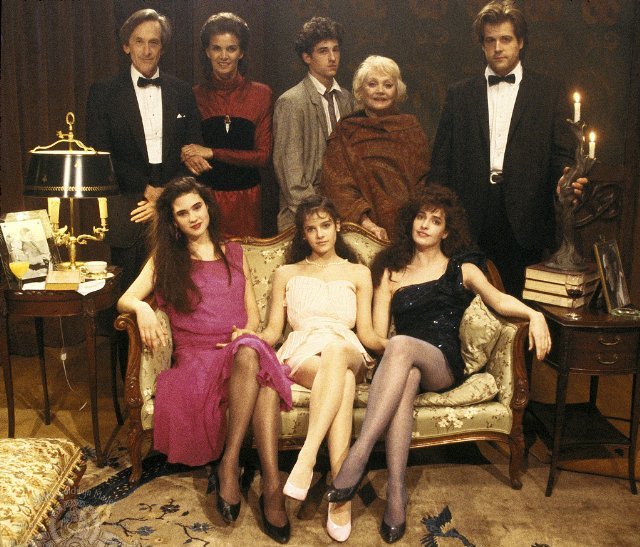 Does Montreal play itself: It does not, but it plays as close as possible. For no discernible reason other than filmmakers periodically become entranced with Château Frontenac, the film is set in Quebec City. Almost every shot that doesn’t include the aforementioned Château is of Montreal. (Everyone in the film’s version of Quebec City either speaks English or internationally accented French, except for one befuddled extra with a moustache who says ‘S’correct!’)

Most egregious local landmarks: The Basilica and the Royal Vic both make pretty obvious appearances (as does the cemetery on the mountain, though it’s impossible to make out exactly which section) but the most interesting and uncharacteristic appearance is of a section of Beaubien (between Alma and St-Laurent) in a frenzied car sequence. Long-shuttered tavern le Nouveau Figaro (on St-Laurent) can be glimpsed in the distance.

Notable local talent: It’s a pretty small cast. The only major speaking role for a local went to Jean-Louis Millette, a legendary Quebec stage and screen actor who plays a stern Catholic priest in a couple of scenes.

I don’t typically give much value to IMDb user reviews — they’re not generally known for their factual accuracy or strict stylistic policies. They’re mostly territory for banal musings (at best) and truly unsettling, tinfoil-hat insanities (at worst), yet the comment section for the 1988 romantic dramedy Some Girls contains a bit of unconfirmed info that I find irresistible. According to a nearly 15-year-old post, the characters in the film were inspired by philosopher Charles Taylor and his family (Taylor being, as you might recall, one of the two dudes who conducted the study on reasonable accommodations, as well as a prof at McGill). According to this bit of unfounded and unprovable hearsay, screenwriter Rupert Walters actually dated one of Taylor’s daughters and based the film on his experiences.

This is by far the most interesting thing about Some Girls, and I have no idea if it’s true.

It’s hard to imagine exactly what Walters and director Michael Hoffman were going for with Some Girls. It’s equal parts syrupy Spielbergian holiday fantasy and lowbrow horndog comedy, as liable to pull at your heartstrings with an angelic grandmother character as it is to throw its protagonist into a sub-Police Academy naked-in-public series of hijinx. Between highbrow and lowbrow, there’s no brow at all — but Hoffman seems more content just wiggling his eyebrows frantically for 90 minutes.

Patrick Dempsey is Michael, a doofy college student whose ex-girlfriend Gabriella (Jennifer Connelly) has invited him to spend Christmas with her family in Quebec City. Gabriella has left school to tend to her sick grandmother (Lila Kedrova), an elfin Frenchwoman who constantly tries to escape from the hospital. Gabriella’s family is a kooky bunch, too; she has two free-spirited sisters who keep sneaking into Michael’s room to try and make out with him, a scholar father (Andre Gregory) who spends nearly the entire film naked (it helps him think) and a very strict, pious mother (Florinda Bolkan) who’s constantly sticking her nose in her children’s business. How’s a guy going to reconquer the wily, super-disinterested beauty that has for some reason invited him out to meet her family if her family’s always in the way?

A significant part of Some Girls seems to be designed as a frothy, bawdy comedy of manners wherein the main character spies a naked butt and falls out the window (which basically actually happens), but without the pace, wit and lightness of tone that’s supposed to accompany such an endeavour. The characters are inscrutable (this is apparently the film’s overall theme, as outlined late in the film by a naked Andre Gregory: women are inscrutable, so don’t bother trying to scrute them and focus on screwing them, I guess), their actions are frequently nonsensical and their attempts at erotic tomfoolery only slightly more arousing than a 30-second preview of Downton Abbey. It’s almost as if the film wanted to class up its own shameless desire to be a sex farce by half-assedly calling itself an updated Restoration comedy then promptly dropping that idea as soon as humanly possible.

Considering that Hoffman (a Rhodes scholar who studied Renaissance literature at Oxford, no less) went on to make significantly more successful variations on the genre (including the 1999 version of A Midsummer Night’s Dream, which was judged “too sexy” to be screened in my high school English class), you might write off Some Girls as a bungled attempt at updating The Country Wife (or whatever). That would be leaving out the entire character of the grandmother, a half-senile, half-magical old biddie who fills everyone with love and believes that Michael is the reincarnation of her husband. Some Girls then breaks from sequences of McDreamy filling his pants with snow to tame his reckless erection to wade in Capra-esque holiday corn for a while. It’s a moderately more successful mode for the film, if only because Kedrova is so likeable in the role of the grandmother.

If we’re to believe that IMDb comment (and we have no reason not to, I suppose), then there’s a discernable kernel of truth in Some Girls. Rupert Walters probably did date Charles Taylor’s daughter and he probably did get invited for Christmas; it’s possible they were an eccentric lot, though I doubt they all tried to sleep with him while he was wearing a dumb dressing gown and matching hat. I’m almost certain that a straight rendition of his Christmas holiday would be more entertaining, more truthful and more relatable than Some Girls.

PS: The titular Rolling Stones song doesn’t even make an appearance in the film, in case you were wondering. There’s a Ziggy Marley song, if that’s any consolation (it shouldn’t be). ■