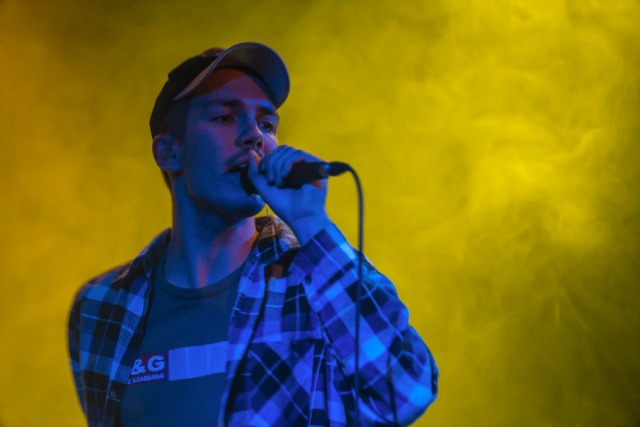 The number in Antoine93 corresponds to the year of his birth. It’s the moniker pop songwriter Antoine Lahaie adopted after realizing his original alias, Dresden Dresses, sounded like a band’s name, specifically the much different sounding Dresden Dolls out of Boston.

The number has nothing do with the music of that year, when house pianos and Eurodance synths were all the rage. His new sorta-album, the seven-track digital release Maybe Unlock My Heart, has some retro touches here and there, although Lahaie insists they were unintentional.

“I want to make music that sounds like 2014 and counting,” he says over coffees in Mile Ex. “People have compared my voice to Depeche Mode sometimes, but personally, I listen to Calvin Harris, and I want to make contemporary music.”

Contemporary in this case can refer to the tools. Maybe Unlock My Heart was made entirely on laptop — no synths in sight — and much of it was composed while on tour.

“I feel like making music on a computer is fucked up, it’s completely inverted. Music used to be played live, then recorded and transferred digitally. Now you’re starting with a computer, you make everything on there, and then after you have to transfer it to a live context.”

Lahaie seems pretty willing to let most music customs slide. For one thing, he’s releasing an album in December, after the critics’ best-of lists have been handed in and new content grinds to a halt. He even planned on giving the album away for free — he’s a believer in the free distribution of music — but ultimately allowed a friend to handle the release.

And then there’s his poptimism. His is an unrepentant love of pop songs that reduce heavy emotions into simple aphorisms.

“People will label what I do as freaky electronic, but for me it’s pop. When I tell people I like Celine Dion, they think I’m saying it ironically, or that it’s a weird hipster joke. I grew up listening to Sade and Seal — that music never left my brain.”

All that Lahaie’s music was perhaps missing was the life experience needed to pen a relatable pop song. During the making of Maybe Unlock My Heart, he was introduced to some heavy emotions, like love, depression and anxiety. Further heightening these new sensations was being in Berlin by himself. (In a room shared with fellow local Sean Nicholas Savage, who moved in as Lahaie left.)

These more personal lyrics have changed the live show, as Lahaie now concentrates on singing, while leaving the music to a backing track and a few triggered samples. Sean Nicholas Savage-meets-EDM was introduced as a comparable.

“I don’t want to look like a DJ in front of a computer, who might as well be on Facebook,” he says. “I want the crowd to feel I’m with them.”

He also wants the crowd to not feel ashamed about their supposed guilty pleasures. Antoine93’s music carries a bit of a humorous tone, which could mislead people into thinking he’s anything less than serious about the emotions he’s trying to convey.

“I got into Avicii that way,” he says of the “Wake Me Up” hitmaker. “It was funny at first that he was making country-EDM for bros, but I’m genuinely into it now. Irony is elastic.”

Same deal with Calvin Harris. Lahaie is a legitimate fan.

“What he does is predictable, but his songs are always so massive that I feel like I’m on MDMA. It’s a natural high. Plus, he’s a male vocalist, so I can relate more.”

But Lahaie saves his highest praise for Harris’s collab with Rihanna.

Maybe Unlock My Heart comes out on Friday, Dec. 12. Check out Antoine93’s video for “Extra Strong”: