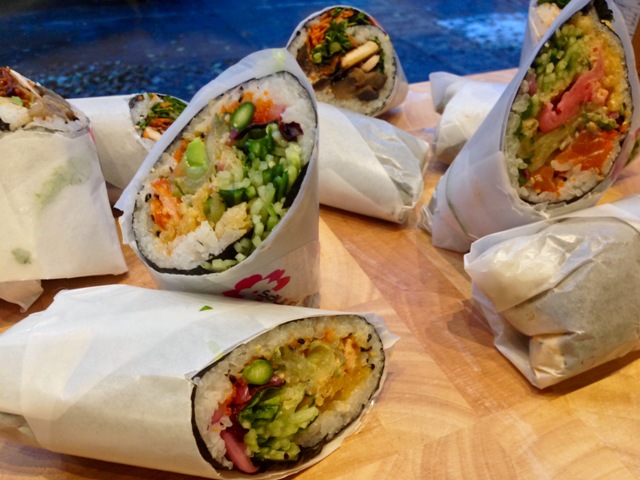 We’ve all had bad sushi. Not poisonously bad, necessarily, but there’s plenty of dry, tasteless soosh out there, usually in pre-packaged containers that have been sitting around just a little too long. But even the weakest supermarket maki wheels can be kicked up a few notches with a soy sauce dip, dab of wasabi and slice of ginger.

But the sushi burrito is another story. These seaweed wraps are the signature dishes at Sayuri Sushi Boutique, a brick-and-mortar spin-off of the high-end catering service, now offering take-out and a selection of Japanese culinary staples (sauces, mainly) on St-Laurent just south of Pine. The burritos are served cut in two, with the usual sauce and garnishes, but dipping is a little awkward and messy, and ginger fans are better off coating their mouth with slices as they make their way through the wrap, rather than placing them awkwardly on top.

The thing is, the garnishes are barely necessary. As with any well-constructed wrap or sandwich, the burrito is made to deliver equal portions of all the ingredients with every bite, and these guys really pack in the flavour.

Everyone raved about their burrito, the only complaint being that, if eaten after the removal of the wax paper, they fell apart towards the end (the seaweed doesn’t wrap all the way to the bottom). Sushi is usually a tidy affair, but these halved wraps need to be eaten carefully, by gradually easing the layers of paper down and picking at the remaining bits at the bottom once the bulk of the wrap has been consumed. It’s a testament to the quality of Sayuri’s burritos — and the efficacy of their sauces — that we didn’t want to leave one grain of rice behind. ■