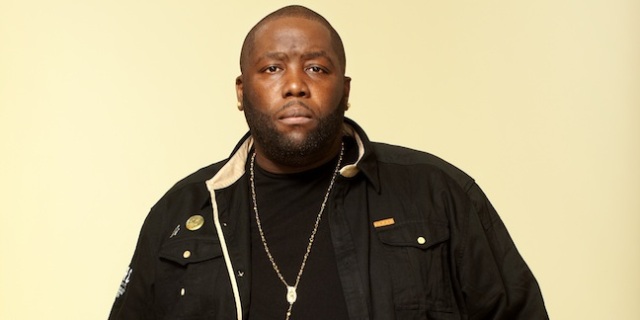 Meet Michael Render, aka Killer Mike, the Atlanta half of juggernaut hip hop duo Run the Jewels. You may already know him his early work with OutKast and Dungeon Family, or from his acclaimed Pl3dge mixtape series. Perhaps you saw him on the Piknic stage at Osheaga in 2012, heard him speak at a POP symposium in 2013, or smoked blunts with him outside the SAT last February when he headlined.

But you’ve never heard him as much as we’re hearing from him these days. Here’s what Killer Mike had to say in the weeks before his new group’s first-ever Montreal appearance.

Darcy MacDonald: The first time we met you were rocking the classic Montreal Expos colours and I think you had told me once your grandfather was a big Expos fan, or at least a Jackie Robison and Montreal Royals fan.

Killer Mike: My grandfather was an Orioles fan, and that’s why I used to rock the black and orange Orioles caps. But the Expos and the Cubs are some of the teams that we got to watch in Atlanta, because if you had shitty cable or no cable, those were the ones that came on the free TV. But I always thought the Expos had one of the dopest logos ever.

DM: Do you have a specific memory of the first time you heard El-P’s music?

Mike: Of course it was the Rawkus, Soundbombing, “End to End Burners” and that stuff, but it was more of a going back, and listening, and being, “Oh my God, this is dopest shit in this world!” ‘Cuz where I grew up in Atlanta we would be into underground New York hip hop as well as what we were growing up on, so the sound was perfect. But I did retroactively go back,and just, mind was just blown, man. Like, I knew of this periphary but how wasn’t I livin’ with this in the same way? So I was probably as big a Jukie and Jux fan. My personal favorite, which even going back I was already aware of and already loved, was the Cannibal Ox album. I had a friend that was really into and so I got turned on, and since then just been a fan of the sound. But I didn’t realize that we’d be making this type of stuff together and that it’d be as prolific as it is. And I’m very proud to be doing so.

DM: How do you feel — and I asked El the same question — about the whole idea that you’ve both been at it for such a long time, and this moment comes along and it’s like a new platform?

I erroneously used the term luck with El and he was like, “Nah, it ain’t luck.” And I agree. But why, then do you feel you guys have earned this over and above all the other people out there that have been at it forever?

Mike: Well, luck is just a meeting of preparation and opportunity. If you aren’t prepared you can’t use an opportunity, and if the opportunity ever comes, you gotta be prepared to work on it to getcha there.

I am a strong believer in serendipity. I am a believer that if I keep doing what’s dope, and what’s right…I knew that my struggle wasn’t that I wasn’t making dope music. It was that something wasn’t right. And the something that needed to be right was a one-producer album that I got from 1500 miles away from someone who came up around the same time and understood hip hop in the same way but had a different perspective on things. I had no idea that I was open to it and serendipity led me to it.

So I’m not a strong believer in luck but I am absolutely a zealot when it comes to serendipity. Serendipitous situations happen, you just have to be open to them and you have to have been willing to put in the work and to be there and deserve to be there.

DM: When you guys do interviews together, you rib each other a lot.

Mike: That’s my brother, I love him! He talks shit about me like no one else, and I love him for it. He keeps me humble.

DM: You must actually have real disagreements behind closed doors sometimes.

Mike: We argue, for sure.

DM: Obviously you’re both these two huge voices involved in this project. How do you get through a disagreement in the creative process?

Mike: My wife says that we argue like a married couple. We argue and we get away from each other and we’re sad and we make everybody else shitty and sad and then they make us sit down and make up. We’re really easy. This whole process usually lasts an hour. (laughter)

You know, El and I, we’re fighting for the same things, so even if we argue or see something differently for different reasons, my ego doesn’t get in the way. I totally believe that El wants the best for me and for him, and I only want the best for him and me.

That’s what I think cements this friendship. A friendship where you don’t argue is not a friendship. It’s a gang if someone is telling you motherfuckers what to do. I feel like every argument we’ve had has been a progression in our friendship and music. So I don’t wanna argue every day, but the ones we’ve had have been worth it if dope shit comes out.

DM: I wanna talk about two of the guests on the record. I know the history a little bit with Zach (de la Rocha) and El. And then also Gangsta Boo, who I suspect you brought in.

Mike: Ain’t she the shit, bro? Which verse?

DM: From the Yelawolf jawn “Throw It Up” — and that shit featured Em, too.

Mike: Yeah, she’s the shit. Like, the Queen of Memphis is real, it’s trill, it’s all the deal.  I love her. She’s like that dope girl on the baseball team that’s playing and just killin’ the boys.

And Zach, man, I grew up a Rage fan. My friend knew the fuckin’ lead singer of Rage, he got on our album, and I have not stopped bragging about that shit since!

DM: How did you react when you heard the verse for the first time?

Mike: Man, Zach actually asked me and El if we liked it. I just walked out the room laughin’ at ‘im like, “Get the fuck outta here,” like, this is amazing. If it’s in you, it’s all the way in you.

DM: You and El do that back-and-forth style that just isn’t around enough in rap any more. Do you guys get to physically sit and write rhymes together more often than not?

Mike: Yup! Usuallly we’re in a room, and I mean El’s fuckin’ with the beats so he’s already sittin’ there. El writes iPad, because he’s a fucking computer genius.

And I write with joint in my mouth, wandering, mumbling and muttering to myself around the room. And one of two things will happen: either El will come up with a few bars or a whole verse or something, and he’ll go in first, or something’ll jump in my head and I’ll be like ‘Hurry up, turn the recorder on, turn the mic on!’ And it starts like that.

What you’re hearing, even in our patterns, is sometimes we sit down and we’ll be like okay, we’re gonna do a four-four-four, because that’s classic, that’s what groups do. But what you’re talking about, moreso, is organically how we blend, because I write in my head and I don’t count bars per se, I may only have seven bars and on the eighth bar get stuck, and El will turn around and be like, ‘I got something.’ He’ll jump up and do the eighth, that might inspire my ninth, so he becomes something in the middle of that. Or he’ll do the next four. There’s no rules to it because I’m writing with the person I’m gonna be performing with.

I’ll be honest with you, I have envied a few people for a few different reasons in my life. I recorded a record called “Push Back” with M.O.P.. We recorded it at Circle House in Miami. And I saw Danze and Fame record together, and go back and forth together, and ad lib together, and that is an experience I envied. Like, “Oh my fuckin’ God.” Like, I’m  a fan, like, ‘Oh shit, they’re actually in there together!’ and I’d never felt how good that felt until I was with El.

It gives us a confidence, it gives you a certain swagger per se. Because you know it’s a two-man duo, ain’t nobody fuckin’ with you. So I really enjoy recording live like that, and I enjoy playin’ off each other rhymes like that. I think it’s an often forgotten style within our past that I wanna make sure is preserved.

DM: What is some of the subject matter of RTJ2? I’ve only heard the three singles like everybody else. (Author’s note: The interview was conducted before the release of RTJ2.)

DM: Have you ever suspected any involvement of intelligence agencies in the entertainment industry?

Mike: There has to be. Because to act like it’s not is to act like COINTELPRO has never existed. To act like it’s not to is act as though America has always been free for artists to do whatever they felt so compelled to do, that we had not (forced) puritanism in our values. To think it’s not would be foolish.

Do I think there’s some dark hand that pushed gangsta rap forward to destroy black people? I don’t know. But what I do know is that I saw gangsta rap produce an economy that was alternative to unemployment for blacks in many parts of this country.

Is there, or was there, or can there be some form of intelligence (agency) in hip hop? Absolutely there can be, because artists challenge people to be unruly. Artists challenge people to think differently. Now to what degree, I don’t know, but if the CIA can be active in, or willing to ignore the fact that crack cocaine, or rather cocaine, is flown into the country and land it in LA, then I’d be foolish to think they don’t listen to shit that rappers say that influences people to think differently.

I’ll say this. Someone said something to me once and I never understood the depths of it until a few days later. He said, “You ever wonder why a lotta the guys from the hippie generation that are non-black are outta prison now?” Why isn’t Leonard Pelletier outta prison? Why hasn’t Assata Shakur been taken off the most-wanted list? And I started thinking, goddam, a lotta people did get forgiven, offically pardoned by the American government. So it’s scary man.

See the second part of our Run the Jewels interview (with El-P) here.