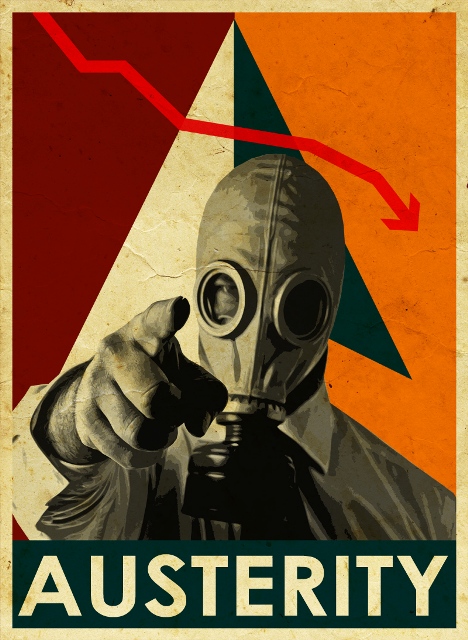 The Germans called it a blitzkrieg.  Literally, a “lightning war” where the invading army moves so quickly on multiple weak points in enemy defences that the subjects of the attacks are overwhelmed and incapable of building a coordinated defence.

That’s what the Couillard government is doing with its multi-pronged austerity program, which is proposing widespread, large-scale, untested and ad-hoc changes in the most basic structures and programs of the modern state.

The targets include working moms, healthcare workers, cops, firefighters, municipalities, school boards … everybody, basically, except Quebec’s economic and political elite. The idea is to turn members of the population against each other as they struggle to preserve their access to affordable daycare, their jobs, their pensions, democratic control over local institutions and so on.

To get away with this, the Liberal government has tried to create a sense of urgency over the need to address public finances, a pressing imperative to act now to avoid a cataclysmic economic collapse. Not surprisingly, the Philippe Couillard government only discovered this urgency after a triumphant election campaign where none of its current plans were mentioned.

No, it was only on taking power that they discovered, OMG!, the former government had lied about how bad it was! Sorry if we have to break a bunch of our promises, but we need to tighten the reins right away … so that we can loosen them again right before the next election.

The best restaurants often have the shortest menus, and there’s a very good reason for that. When you concentrate on a few specialties, there’s a much better chance you’ll do them well. But when your menu includes egg rolls, pizza, chana masala, pigs feet, coq au vins, sushi and poutine, you know something is going to go horribly, horribly wrong.

In just a few short months, the Liberal government has proposed unprecedented changes to the way we run our hospitals, schools and daycares with virtually no advance public discussion, consultation or planning. The have admitted that they have no idea how increases to the costs of daycare services will affect working women, for example, but that didn’t stop them from proposing changes that could increase costs by $835 to $2,678 per year per child for some families.

Bill 10, which will institute the largest change in healthcare administration since the 1960s, was similarly, seemingly, pulled out of a hat. And now we have the president of the Quebec treasury board announcing plans to cut two per cent of jobs in the civil service and the head of the government’s blue-ribbon austerity panel proposing cuts to agriculture subsidies and municipal transfers.

Even taken individually, it’s difficult to evaluate how each of these measures will affect the cost or quality of public services or what sort of impact they will have on the economy as a whole. When you cut subsidies for farmers, for example, you affect the price and availability of the food they produce and even their ability to continue farming. When you slash funding for cities, they cut back on infrastructure maintenance, increase taxes, reduce services or a combination of the above, affecting direct and indirect employment and the disposable income of taxpayers.

And to make the situation that much more precarious, the Liberal government is making all these moves on the eve of negotiations with all of the major public sector unions, whose contracts expire in just four months.

When all of these proposed changes are thrown into the same basket, the only thing that’s certain is uncertainty. And that, they’ve been telling us for years, is the greatest threat to our economic stability.

Thousands of Quebecers will be marching this weekend to voice their opposition to the cavalcade of cuts being debated by the Couillard government. If you want to join them, the Montreal march will assemble at Place du Canada (René-Lévesque and Peel) on Saturday, Nov. 29 at 1 p.m. ■
Peter Wheeland is a Montreal journalist and stand-up comic. His sardonic observations about the city and province appear on Cult MTL every week. You can contact him by Email or follow him on Twitter.