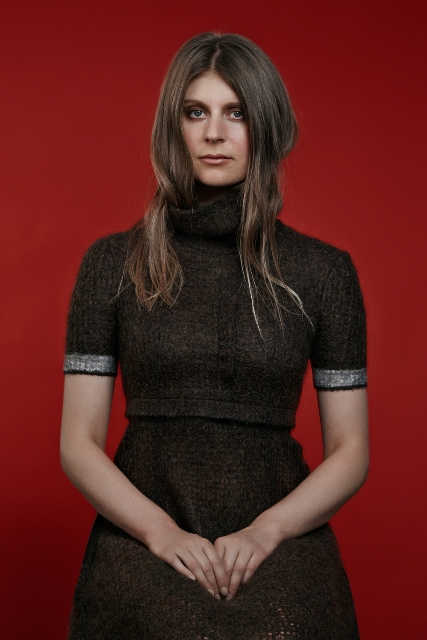 Earlier this fall, Toronto-based singer/ composer Lydia Ainsworth released her debut LP, Right From Real, on local label Arbutus Records. The onetime McGill student has only played about 15 shows to date, most of them one-offs and festival showcases, including sets at POP Montreal in 2013 and 2014. This month she’s returning to play the M for Montreal music fest.

Her minimal, sometimes spectral orchestral pop songs may be reminiscent of female alt-pop icons like Björk and Kate Bush, and of 20th century composers including Wendy Carlos and Bernard Hermann, both known for their dramatic film scores. And it was in that very milieu that Ainsworth got her start.

Lorraine Carpenter: So how did this project begin? I understand you came to writing music through composing for film.
Lydia Ainsworth: Yeah, I was writing scores for friends’ films, and that became a real passion of mine. I got really serious about it. I got a grant from the Canada Council to study film scoring at NYU. I really immersed myself in it, and I was using my voice a lot in those scores. Through that process of recording my voice, I started to write songs.

LC: Were you getting tired of collaboration, and working towards other people’s artistic’ visions?
LA: Well some of the projects allowed me total creative freedom and those were amazing in helping me to develop my own artistic voice. The other ones that required me to write in a way that wasn’t most natural to me also gave me some experience with developing tools that I may not have if I didn’t have that opportunity. But there came a point where I really just wanted to follow my own vision and write a collection of songs on my own. I respect writing for film and fulfilling a director’s vision, but it’s just a different mindset.

LC: When you started writing your own stuff, did you go to visuals for inspiration, out of habit?
LA: Yeah, especially in the beginning, when I was living in New York—there’s such an abundance of amazing galleries there. I was really obsessed with this one painting in the MOMA called “The Menaced Assassin” by Magritte. The first song that I wrote outside of my film scoring stuff was inspired by that painting. On this album I drew a lot of inspiration from a baroque artist named Guido Cagnacci, whose later paintings depict famous iconic female figures on the brink of death. I was really drawn to those pictures because of the juxtaposition of the serene quality and the terror—I wanted to embody that in my vocal production.

LC: Had you ever performed your own material as a film composer?
LA: My pieces have been performed but never by me. A friend of mine asked me to perform at a party and I said yes without even thinking that I didn’t have enough material for a live set. That’s also part of the reason I started to write songs. I performed a few songs at that party with a little ensemble of string quartet and oboe and double bass. It was just so much fun to bring everyone together and hear the songs live that it propelled me to continue. ■