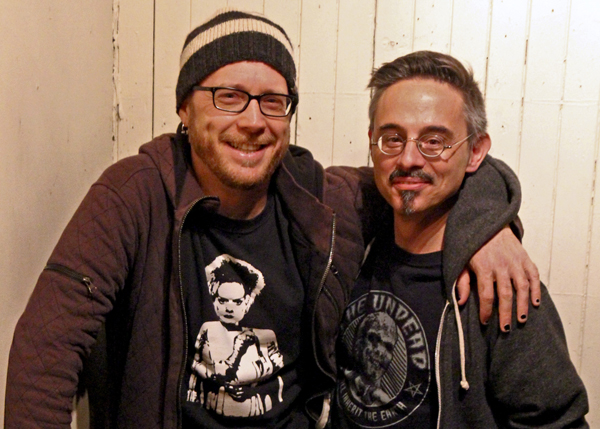 The Miskatonic Institute of Horror Studies was born out of the perception that horror films had been unfairly stigmatized in academia as being somehow less artful or less intellectually relevant than “regular” films. Founded in early 2010 by Kier-La Janisse, the non-profit community organization has been co-run by Kristopher Woofter and Mario DeGiglio-Bellemare (film professors by day at Dawson and John Abbott, respectively) since the fall of 2010. Initially located  in the now-defunct Blue Sunshine micro-cinema on St-Laurent Blvd., the MIHS now operates out of Parc Avenue’s [ÊTRE] Microcinema. And though it was originally aimed at teenagers (14–17), the MIHS has broadened its scope to anyone with a serious love for that most derided of genres.

“A lot of people in the horror community pride themselves on the fact that they hated school,” says DeGiglio-Bellemare. “So many of them were outsiders, marginalized, goths or whatever, growing up, that actually teaching horror classes within the horror community is a little bit daunting.” As horror fans and academics, Woofter and DeGiglio-Bellemare saw real potential in offering in-depth, academic-level classes on subjects that would sometimes not find a place within traditional academia. “Even some of the people we’ve asked to come and lecture have told us some of it was way over their heads!” explains Woofter. “We’re not trying to intimidate anyone, but we are serious about horror,” adds DeGiglio-Bellemare. “Our courses are university-level courses for everyone.”

The schedule runs from September to May, with classes lasting anywhere from one to five weeks. The MIHS has lined up a murderer’s row of instructors over the years, with academics from Montreal universities and American colleges teaching alongside industry vets like Fangoria’s Chris Alexander. (Woofter and DeGiglio-Bellemare are taking the semester off from teaching at Miskatonic themselves, their academic plates already being pretty full from their day jobs!) Each class runs roughly three hours, with half of the class dedicated to screening a relevant film and the other to lecture and discussion. “Our presenters are teachers, they do this for free because they love the horror genre, the community and the atmosphere we create there. It’s pretty impressive!” says DeGiglio-Bellemare. “Sometimes it’s almost more like a film club,” adds Woofter.

This fall semester’s schedule begins today with Karen Herland’s Blood Born: Invasion of the Body, a three-week series focusing on depictions of infection in relation to the AIDS epidemic in horror films. Also on the schedule: Michael Wood’s Beyond Conan: The Horror Literature of Robert E. Howard, about the lesser-known works of the pulp master; J. Shea’s Shakespeare and Horror, about horrific themes and tropes in Shakespeare’s work, and the French-language course Petite philosophie du zombie by Quebec City-based writer Maxime Coulombe.

Woofter and DeGiglio-Bellemare are also finalizing work on a book they’re co-editing titled Uncovering 40s Horror, which explores the much-maligned, academically ignored horror films of the 1940s. Each chapter is handled by a different author, many of whom have also taught at Miskatonic in the past; the book will be released in November.

Meanwhile, they highly encourage anyone with a passion and curiosity for the horror genre to drop in on a Miskatonic class. “It’s not like we’re a bunch of horror nerds who are taunting you to ‘Enter if you dare!’,” laughs Woofter. “It’s very inclusive.” ■

The Miskatonic Institute of Horror Studies operates on Tuesdays out of [ÊTRE] Microcinema (6029A Parc). Classes cost $7 (suggested donation) or fixed prices for the full series. Check their website for details.