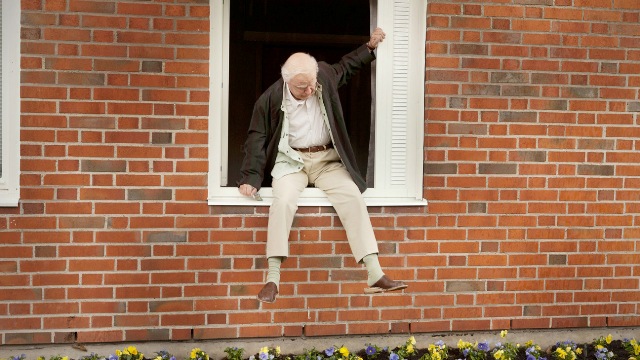 If it ever looked like Sweden’s filmic output on this side of the ocean was going to be summed up by Ingmar Bergman and Roy Andersson, rest assured: The 100 Year Old Man Who Fell Out of a Window and Disappeared (heretofore known as The 100-Year-Old Man…) has the whole Forrest Gump/madcap hijinx genre covered. While definitely more lowbrow and crowd-pleasing than stark and existential, Felix Herngren’s adaptation of Jonas Jonasson’s best-selling novel is a winning though uneven dark comedy that benefits immensely from its dry sense of humour.

Allan Karlsson (Robert Gustafsson) is the titular centenarian, an explosion-loving old codger who ends up in a retirement home against his will when he blows up the fox that killed his beloved cat. On the eve of his 100th birthday, however, Allan climbs out the window and heads toward the bus station, where he inadvertently steals a suitcase full of money from a biker with a bad case of the shits. Unknowingly the target of an easily-angered British gangster (Alan Ford, essentially reprising his role from Snatch), Allan roams the Swedish countryside, haphazardly dodging his assailants and making friends along the way as the viewer learns of his remarkable century at the centre of many world conflicts (including the Spanish Civil War, WWII, the Manhattan Project and being thrown in the gulag with Einstein’s idiot twin brother).

It’s impossible not to think of Forrest Gump during the copious flashback scenes; like the protagonist of Zemeckis’s film, Allan is an oblivious idiot who finds himself at the crux of world-changing events and usually alters them in some way (often through stupidity, drunkenness or a bit of both). The 100-Year-Old Man… finds itself falling closer to the intent of Winston Groom’s original novel, however, playing the events for satire rather than pithy sentimentality. Allan isn’t the happy-go-lucky idiot that Forrest is; he’s a bit of a doof, but nearly everything that he does is to serve his lifelong love of watching shit explode. The film (and the original novel, I have to assume) sometimes leans on the crutch of throwing familiar characters into the mix for no other reason than to elicit a pang of familiarity from the viewer, but it still feels less like desperation and more like clever nonsense (the omnipresent, jaunty Curb Your Enthusiasm-type score, however, is just grating).

Robert Gustafsson (a well-known comedic performer in Sweden, his comedy troupe counts amongst its ranks Let the Right One In director Tomas Alfredson!) plays Allan from age 15-ish to 100 and it’s largely thanks to his performance that the film is so funny. Gustafsson is anything but subtle in his portrayal; Allan at 100 feels awfully like a guy in old-man make-up, but Gustafsson uses that to his advantage. An outsized and somewhat perplexing man, Allan might Zelig his way through life, but never anonymously.

The 100 Year Old Man… subscribes to the ‘chuck everything at ‘em and see what sticks’ approach to comedy, which makes it inevitably uneven. It’s a movie that careens from Stalin jokes to people slipping in elephant shit rather inelegantly, but never to the detriment of its laughs. I use the word ramshackle in the pejorative sense a lot, but here’s a film that knows how to harvest the energy of its odds and ends toward something entertaining, if not exactly essential. ■

The 100 Year Old Man Who Fell Out of a Window and Disappeared is screening with English subtitles at Cineplex Odeon Forum Cinemas (2313 Ste-Catherine W.)