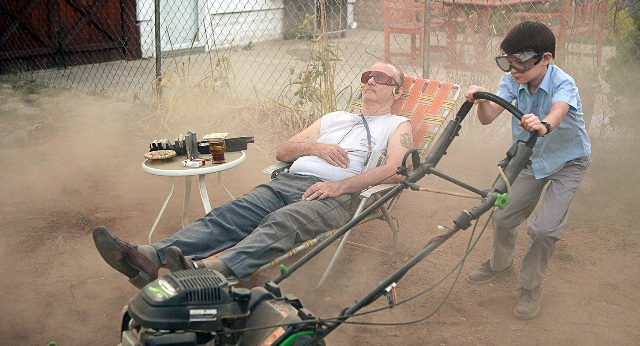 Sure, Bill Murray is pretty great. He was an early SNL cast member, a Ghostbuster and a great Hunter S. Thompson (before Johnny Depp). More recently, his work with Wes Anderson has skewed Murray away from straight-up comedy. Maybe it was inevitable that this second wave of his career would wash up to a movie like St. Vincent.

A lot of the promotion for this film focuses on Murray and Melissa McCarthy, both known primarily for their comedy chops. But don’t believe the hype: this is not “laugh-out-loud funny” stuff. Ironically it’s Naomi Watts, as a pregnant Russian prostitute/stripper, who supplies most of the comic relief, with an assist from Chris O’Dowd as a kindly Catholic schoolteacher. This is essentially a feel-good movie, one that affords many opportunities for your eyeballs to roll around in your skull.

Murray plays Vincent, who at first glance appears to be little more than a sad old crank living the debauched bachelor lifestyle in his 60s. McCarthy plays his new neighbour, a woman whose demanding hospital job leaves her at a loss when her son Oliver (Jaeden Lieberher) gets robbed of his house keys by a bully at school. Vincent grudgingly agrees to host the kid in his shithole of a house. The babysitting gig continues, and the clichés pile up: Vincent teaches Oliver how to defend himself, and through their excursions, we learn that old Vin isn’t the curmudgeon we thought he was. At one point he has a setback and has to meet a challenge — revealing more on this note (and the stories that expose his secret heart of gold) would constitute spoilers, so I won’t go there.

In a lot of other films, Bill Murray seems to be playing Bill Murray, and that’s a character a lot of us enjoy. But, to his credit, he doesn’t rely on any familiar schtick in St. Vincent. Even his voice is different. The film opens in darkness, with Vincent telling a joke to his non-plussed barfly friends, and before his gnarled old mug is revealed, I was sure I was listening to someone else. Murray affects an accent and alters the cadence and tone of his voice. That’s acting, right? And we know how the academy loves to reward actors who stretch outside of their comfort zone — here, Murray is unlikeable to the point of being borderline offensive, a lot more physically pathetic and emotionally sad than usual, and sounds like he’s from, I dunno, maybe New Jersey.

If this isn’t tailor-made to get Bill Murray an Oscar, I don’t know what is. Most of us would feel good about seeing Murray get a statuette.  But I feel bad that it’s likely to emanate from a schmaltzy movie that’s otherwise destined to be forgotten. ■

St. Vincent is in theatres now