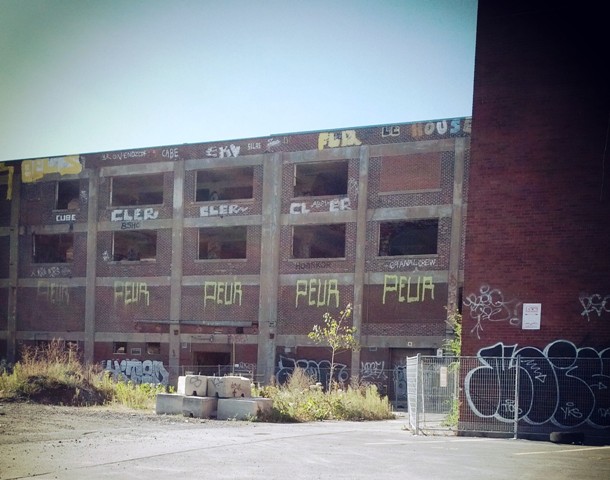 Bye bye bando: Mile Ex’s most famous derelict building for urban exploring and/or fashion shoots, on the corner of Van Horne and Parc, has been demo’d for good.

Firefighters under fire fired: Turns out you can’t storm City Hall to protest pension changes and escape unscathed. Six firefighters who ran amok during city council meeting last August have been fired by the city, and others have been suspended.The firefighters union will, of course, fight to reverse the decision.

Escape from Brossard: If you decide to hit up Dix30 for a bit of shopping this weekend, take note that the Champlain Bridge will be closed on the way back into the city. If you can’t make it out, enjoy your new life on the South Shore.

Hippogroan: The shuttered-since-2009 horse racing track on Decarie, the Hippodrome, was supposed to be turned into housing. That was 2012, and things haven’t gone according to plan. The clubhouse remains, but the province still hasn’t signed off on the plan. So we wait.

Camera ready: Possibly the biggest news out of the Magnotta trial this week is that the scene of the crime — a four-storey Côte-des-Neiges building (indistinguishable from buildings all over town where many young Montrealers rent their first studio apartments) — actually had functional surveillance cameras.

Preventable death: A coroner’s report determined that the death of cyclist Mathilde Blais, killed when she was struck by a truck riding the St-Denis underpass, was avoidable. The coroner made three obvious recommendations, most notably the need for more safe lanes for bikes.

And no, ebola hasn’t hit Montreal yet. ■