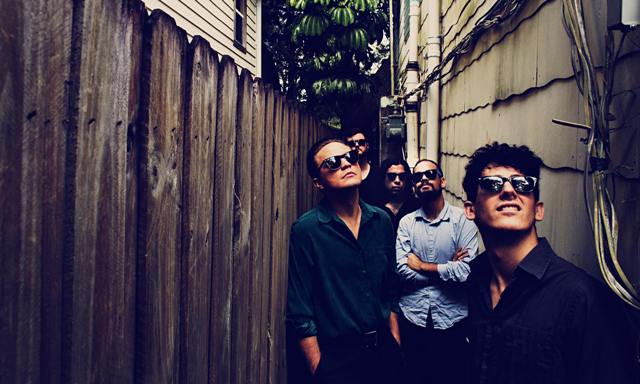 Florida is famous for being the home state of some of America’s craziest people, but not so much for its music. Surely you remember the Miami bath salt zombie of 2012, but could you name a band from there?

Elsner Nino is the drummer for Merchandise, a rare acclaimed band from the Sunshine State. Even though he doesn’t know of too many acts from his adopted Tampa, he at least has a pretty good excuse — he’s the only member of Merchandise who isn’t a Tampa native — but since relocating from New York to the band’s house in Seminole Heights (where four of the five band members live), he’s become acclimated to the hot, humid and isolated Florida way of life.

The heat that may one day drive him mad has yielded the group’s latest album, After the End, a highly ambitious and awesomely antediluvian stadium-sized rocker rooted in the DIY hardcore ethics of founding members Carson Cox and Dave Vassalotti.

Here’s my interview with Nino, who was en route to Minnesota from Fargo, ND when I caught up with him by phone.

Erik Leijon: So how has the transition from New York to Tampa been?
Elsner Nino: Oh yeah, it’s pretty extreme. There’s a completely different way of living there. I was in a unique situation because everything was in place for me socially, but it’s still kind of a shock. In the beginning it felt like a fucked up Twilight Zone episode that I didn’t want to watch, but had to. But it’s cool to put yourself in that environment, but it’s been a trip.

EL: Did you get a good primer on Tampa thanks to the “Enemy” video? I read it was filmed in places that were pretty significant to the other band members.
EN: The primary location was at the Tampa Theatre [est. 1925]. It’s totally ingrained in their psyches. It’s an iconic place for people in Tampa, including the band. It’s the kind of place you want to check out if you ever come here — it’s a palace. They were shooting at a place that weighed heavily on their memories.

EL: Do Merchandise have a unique perspective on rock, being from Florida? I don’t know any other bands from there.
EN: I don’t either (laughs). With the exception of the death metal bands that came from Tampa, ones that put death metal on the map, I have no clue. The Merchandise guys were in older, hardcore punk bands that was I really into.

EL: And now you make music that sounds nothing like hardcore punk.
EN: No, not at all, but the psychology is still set in place. The ethic is still there. The music may not be violent, noisy and fucked up, but at the core it’s still who we are and where we come from. It’s just now opening a different door and exploring new territory.

EL: Dave’s 12-string guitar is something new that really stands out on After the End. Did it change the songwriting a lot, to have it included?
EN: I feel it did to a certain extent. There was more finesse added because of it, and it affects the dynamic. It’s a night and day approach as far as interpreting that sound live, since he doesn’t bring it with him on tour. Maybe we’ll have it in the future, when we’re able to attach a trailer to our van that can hold the 12-string and our glockenspiels (laughs).

EL: I was surprised to hear After the End was a home recording. It sounds like a vast studio production.
EN: Yeah, totally 100 per cent. We had a lot of help from the person who mixed it in London, Gareth Jones. He’s mixed and produced tonnes of records, from Depeche Mode to Erasure. He made it sound huge, but for the raw recordings, we had a powerful computer and a basic recording program. We tried out different things and made it sound as good as we could from inside a closet.

EL: Closet? A walk-in?
EN: Yeah, a fancy closet. It wasn’t that tight. It’s where pretty much everything was tracked. Other parts of the house were used, too, but mostly it was done in the closet in Carson’s room.

EL: Where is this house?
EN: It’s in a neighbourhood called Seminole Heights. For a lack of a better term, it’s a bit of a yuppie, gentrified area, but it’s still Tampa and it has seedy elements. There are some great BBQ spots and a lot of freaks on the street. It’s a two-storey house that’s really comfortable. It’s a pleasant environment, which is good since four out of the five of us live there. We have the ability to practise and record every day.

EL: What sort of seedy elements?
EN: There’s a street nearby with a lot of prostitution. You hear gunshots. It’s not as you walk out the door, but at night, a few blocks away, you wouldn’t want to hang out. Crazy people just seem crazier here, too.

EL: Crazier than other places?
EN: Absolutely. I lived in New York and you get crazy people in every city, but for whatever reason they seem more insane in Florida. I don’t know why. It’s a combination of the heat, the bugs and the isolation. You put that all together, it’s going to fry your brain, or turn you into the type of musician that such a place fosters. ■