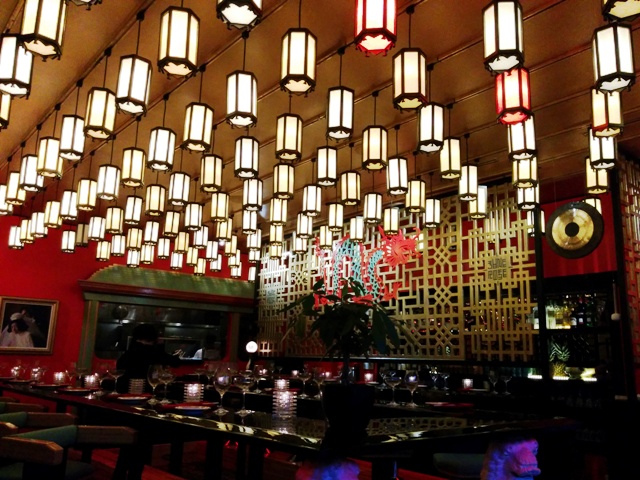 The Americanized all-you-can-eat Chinese buffet has always appealed more to the heart and stomach than to the head or tastebuds. MSG-laden broccoli stems that glisten like the Hope Diamond and spare ribs swimming in sticky, sweet goop constitute no one’s idea of fine dining, but greasy Chinese food isn’t without its merits. Add some class to the comfort, and it could be more than a guilty pleasure.

June Rose, the latest restaurant from Big in Japan/Big in Japan Bar’s André Nguyen, is the fancy shot in the arm the Chinese all-you-can-eat has been looking for. It’s not a buffet per se, as in there are no trays or rows of food under lamps. It’s a sit-down, and a nice one at that, so it’s really trying to do for Chinese food what Kanda et al. did for sushi.

If you’re looking for character, June Rose is a visually striking space. The bright, red-walled interior, with dragons, a gong (that supposedly gets hit when you buy the staff shots) and over 200 lanterns hanging overhead is a welcome change from the locale’s dour predecessor, the dimly lit date spot Ginger. There are booths along two sides of the room, and in the middle there are glass communal tables that look like the ones from Big in Japan Bar.

From opening time at 4 until 6 p.m., the early bird flat rate is $20 a person, $25 afterwards. Wanting to feel the same sense of thriftiness one does when they hit up a dingy buffet, my trio of dining companions and I went at 5 p.m. The menu offers 14 dishes – ranging from basics such as rice to tapas-sized dishes – on its all-you-can-eat menu, along with four add-on dishes ranging from $6-$12.

As was suggested to us, we ordered all 14 of them, split into two acts. They sent the dishes one after the other in a timely manner, wisely starting with small appetizers and gradually moving towards the larger items. The dishes were presented on single plates, although there was always enough on them for four servings. (Not that it matters, since you could always order more.)

Among the small openers, the pickles hit the spot, but it was the braised eggplant and pork – crumbly like chorizo – that came to mind when it was time to order seconds. The egg drop soup was a nice, fresh change of pace from the usual won tons or sweet & sours. The sautéed broccoli sparkled and the black vinegar mushrooms were devoured quickly.

The tapas-esque dishes were a mixed bag. The cold poached chicken was indeed cold chicken. The BBQ pork were sashimi-sized. The BBQ pork pastries were miniscule and slightly singed along the corners. The two robust main-event noodle dishes, one with chicken and one with pork and egg, were the only two items that could have worked as full meals.

The two desserts we tried, poached pear with jasmine ice cream and sesame pastry stuffed with red bean paste, showed a level of finesse above most of the main meals, and were delicious.

June Rose is packed with little flourishes. The orange slices are more than meets the eye – I’ll save you the spoiler. Even the washroom sinks, which look like they were built with mahjong pieces, were memorable. It’s a place with personality, and hopefully a revolving menu. ■