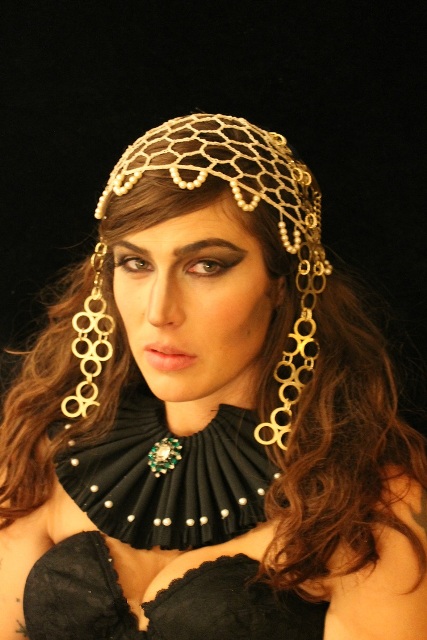 You may well recognize local singer/musician Giselle Webber from past projects like the Hot Springs, or from rousing gypsy music collective Orkestar Kriminal, or perhaps from her rap persona Giselle Numba One. But do you know Gigi French?

The jazz/pop/soul/klezmer/swing diva will be performing with her supporting troupe of cabaret musicians ce soir chez Divan Orange, playing new material from her forthcoming second album, to be recorded at Montreal’s Hotel2Tango in December, as well as launching a video (see it below) directed by Bruno Goulard.

I connected with Ms. Webber by email to see what’s what:

Lorraine Carpenter: So where did Gigi French come from?
Giselle Webber: Gigi French started up back in 2009, after I had moved up to the mountains. I was falling in love with the acoustical groove of that fabulous A-Frame, and realizing that it was a genius place to be cutting records. The space itself sounded so beautiful, so I would invite my pals from the city who were fantastic at improvising, and cook them a giant meal — wine, women and song! Chuck a few microphones here and there, and whammo! We made some pretty tunes off the cuff of our sleeves, and the energy was like something from an old H.C. Andersen story. I was a city girl, full of whorish memories, reminiscing and sobering up, so I’d write about my city life from afar, and always in French, just to switch it up. It got big real quick, and pretty chaotic by the end, with many people on stage performing who had never heard the songs before!

LC: I read that tonight’s performance will feature six guest vocalists singing angry francophone songs. Who/what can we expect from this show?
GW: It’s actually been whittled down to five, and tonight even four, which is a big change from before! We’re all singing, like in the old days of Buddy Holly and the Crickets, or the Wailers or, what have you, where I play a lot with back vocal arrangements and all of a sudden the sound becomes rich and full, even if we are few. Angry, yes. Francophone, no! Danny Marks on drums, Missy Rose Hidic on guitar, Eddy Blake Eaton on the upright bass, Sam Minevich on the vibraphone, and myself on guitar and voice. You see, those names are not the Frenchest! ■