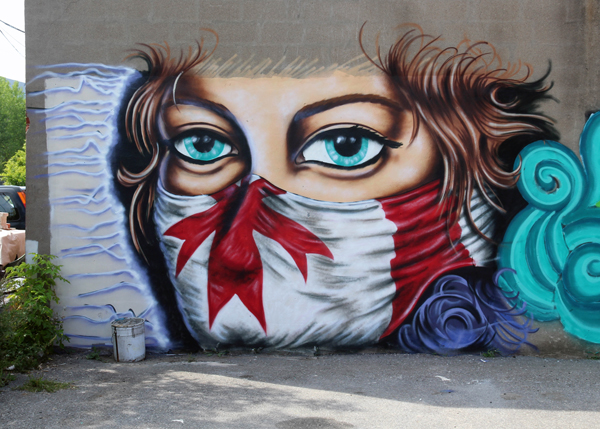 You might have noticed over the past few years an increase in visibility and intensity of actions led by Canada’s indigenous communities — with the political lobbying of Idle No More to the sick beats and outspoken politics of A Tribe Called Red, non-natives are hearing a lot more about the issues facing Canada’s First Nations, Inuit and Métis people.

Fresh in our collective consciousness is Inuit throat singer Tanya Tagaq’s Polaris Prize win (whose performance at the awards gala involved the names of 1,200 missing and murdered native women scrolling on screen behind her), the annual vigil and march for missing and murdered native women, ongoing controversy about a certain Washington sports team with a racial slur for a name, tense conflicts flaring up in Elsipogtog and elsewhere over shale gas and pipeline development, not to mention the approach of Halloween and its perennial problem of cultural appropriation. It seems like an especially opportune time to talk about these issues.

If you’ve been paying attention, you’ll notice that much of the discourse centres around the theme of decolonization, a concept that sounds rather self-explanatory, but can be difficult to define or to know how to put into practice.

Canada’s colonial history is nothing new. Most Canadians have at least some awareness about the history of genocide, displacement, forced cultural assimilation and paternalistic management that the True North Strong and Free has meant for native people here.

The process of decolonization is aimed at moving forward from this history in a way that both acknowledges the ways settler communities (read: anyone who isn’t indigenous to this land) have benefited from it (for example, from wealth generated from resources extracted from unceded native lands) and renegotiates existing power structures to respect the autonomy and self-determination of Indigenous communities. Complicating matters even more is the extent to which the challenges facing native groups as a result of our colonial past is intersected with issues of class, gender and other social separators.

These issues are so large it can be hard to know what action to take for individuals invested in anti-oppressive politics. Sometimes it’s a matter of creating spaces for dialogue to occur among our own peers and communities. Back in August, a group of Montreal based artists have done just that by organizing a convergence called Decolonizing Street Art, which brought together artists, activists, youths and community members from Montreal and beyond to engage in making art and in conversation with a focus on decolonization.

The artworks created during the convergence can be found in the Petite-Patrie neighbourhood in the general area bound by Beaubien to Jean-Talon and Parc to St-Urbain, and include works by organizers and Montrealers Cam and Zola, Swarm (Toronto), Jessica Sabogal (San Francisco), Bandit (L.A.), lmnopi (Brooklyn), Chris Bose (Kamloops) and Nigit’stil Norbert (Yellowknife).

“We invited some indigenous and non-indigenous street artists to make a community here to talk about decolonization, about the murder of indigenous women and all these issues.” explains organizer Cam. “We invited a lot of feminist street artists, which is very important for me. So I just started to write some emails to artists asking if they were interested in this project.

“When we’re doing street art, it’s easy just to be alone doing our own stuff and not talk to anybody, but this is a small city, so we need to find ways to come together. We wanted to facilitate meetings of indigenous and non-indigenous street artists just to see what’s happening and have discussions.”

The conversation swirling around the room during the workshop on cultural appropriation made it clear that artists and activists can find it difficult to know where the boundaries are and often have ambivalent feelings when trying to interpret representations of indigenous people in art and culture. For example, does a mural depicting a strong, noble-looking native elder help tear down negative stereotypes by depicting a native person in an undoubtedly positive way, or is it a romanticized vision that renders native people fixed in history, contributing to the difficulty many people have in recognizing indigenous people as modern and innovative with a vibrant, living culture that’s continually adapting just like any other? These are difficult questions to answer, and fuelled exactly the types of conversations the organizers hoped would take place at the convergence.

Helping to coordinate the convergence with Cam was another prolific Montreal street artist, Zola, whose work has increasingly dealt with themes of decolonization and Indigenous resistance. When I ask her about the term “decolonize” and what it means, she tells me:

“I would recommend to anyone to go read Indigenous sources on the definition. We, as a mixed settler and Indigenous organization, took sources that were from Indigenous people and they don’t all agree on exactly what it means. I think most agree that it’s a process, and that’s why our organization is called ‘Decolonizing.’ It’s not called ‘Decolonized,’ because we’re not done yet; we’re just trying to do something that’s going towards the goal of decolonization.”

A good place to start moving closer to that goal is by joining the calls for a national inquiry into the urgent issue of missing and murdered native women in Canada. Some excellent resources to check out on this topic include the online journal Decolonization – Indigeneity, Education, and Society, which counts Indigenous activist-scholar Andrea Smith on its editorial board, a series of indigenous-issues intro primers by Montreal-based Cree Métis educator âpihtawikosisân (found here), and anti-oppression journalist Harsha Walia’s discussion about the process of decolonization for Briarpatch Magazine, Decolonizing Together – Moving beyond a politics of solidarity toward a practice of decolonization. ■