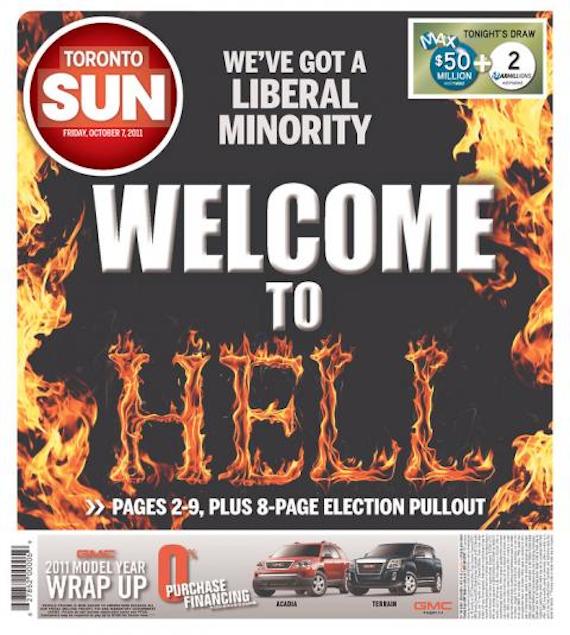 We live in a society where many of the people who make the most money don’t actually make anything except more money. They buy things that already exist and sell the pieces for profit, a little like a scrap dealer who buys your clunker for $500 and sells the parts for $3,000.

That’s the driving force behind the announcement that Canada’s largest newspaper chain is about to buy most of the assets of our second-largest chain. Postmedia — which owns the Montreal Gazette and nine other major daily newspapers  — is prepared to spend $316-million to buy 175 newspaper properties from Quebecor Media, which includes the Sun chain of daily newspapers and a slew of smaller dailies and community weeklies.

There’s a lot of speculation that Quebecor may be getting rid of the Sun chain because it’s a bad fit for Pierre Karl Péladeau, the Quebecor owner who is hoping to become the next leader of the Parti Québécois. But although it’s true that the anti-Quebec Sun and Quebec nationalist PKP are a mutual embarrassment, Quebecor has been signalling its desire to get out of the newspaper business for a while now, selling off all of its Quebec weekly newspapers to rival Transcontinental for $75-million last year.

With the Sun sale, PKP’s print newspaper foothold will have essentially reverted to its core Journal de Montréal and Journal de Québec, the foundation on which PKP’s father, Pierre Péladeau, built a media empire that now embraces everything from TVA to LCN to Vidéotron to music, magazine and book publishing.

If Quebecor is selling off the newsprint clunkers, it’s because it thinks there’s not much mileage left on them. How else do you explain its willingness to sell assets that it bought for about $1.4-billion ($1-billion for the Sun chain in 2000 and $414-million for Osprey Media in 2007) for about one-fifth of the purchase price?

There’s still money to be squeezed out of the carcass of Canadian daily newspapers, however, which is why Postmedia was interested. And when I say Postmedia, I mean the hedge-fund investors who created Postmedia after buying up the near-dead body of heavily indebted Canwest, the former owner of the chain of newspapers previously known as Southam.

The investors, led by New-York-based GoldenTree Management LP, buy up so-called “junk bonds” from distressed companies like Canwest and then create new companies like Postmedia to run the old ones. But where’s the profit? Well, the new company goes heavily in debt to the hedge-fund investors who recover their money on its junk bonds, which in Postmedia’s case, paid interest ranging from 8.25 to 13.3 per cent, according to the Globe and Mail.

The heavy debt level pretty much ensures the chain won’t ever make any money despite slashing expenses to the bone and laying off large parts of the labour force, as Postmedia has done, cutting its staffing almost in half in the last four years. (I was part of those staff reductions, taking a buyout in 2012 when most copy-editing functions at The Gazette and other Postmedia dailies were transferred to a non-union shop in Hamilton, which now puts together the print editions of all the “local” papers.)

If we want to predict what will happen now that Postmedia is adding another $316-million to its staggering debt load and effectively doubling up its daily newspaper ownership in Edmonton, Ottawa and Calgary (where the Sun and Postmedia currently compete), a miniature mirror is close at hand.

Remember those 74 weekly newspapers that Quebecor sold to Transcontinental not that long ago? The immediate result was the closing of 20 newspapers and the sale of another 14, only three of which continue to have print editions.

If you have ever wondered how newspapers manage to get such extensive obituaries written just hours after a celebrity dies, the fact is that most are written years in advance. Every once in a while they’ll be updated, so all that’s left to do when the inevitable death occurs is add the details and get some quotes from family, friends and fans.

Despite some weasel-wording Monday from Postmedia chairman Paul Godfrey about it being “too early” to say if more jobs will be lost and that “our intent is to keep everything open” — even in markets where they would have two newspapers — the obituary for Canadian dailies has already been written.

It’s in the interests of the scavenging hedge-fund investors, however, to keep the patient alive as long as blood can be wrung from the ever-weakening, ever-thinning body.

So don’t look at the Postmedia move as a rescue of Canadian newspapers from the grasp of a Quebec nationalist. It’s merely the transfer of a dying patient into the hands of a caretaker who will do as little as possible for as long as there’s still money to be made. ■