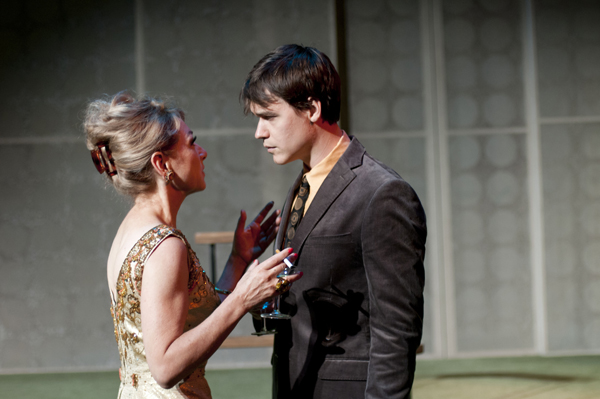 Brigitte Robinson and Luke Humphrey in The Graduate. Photo by Andrée Lanthier

I’m chatting with an actor when off in a corner, some roaring catches our attention.

Mrs. Robinson is screeching, her fists shaking, coif askew. “I don’t know what you think you are doing. Get the hell out of here! Go! NOW!”

It’s the press call for the Segal’s season opener, The Graduate. Mrs. Robinson (played by — yes — Brigitte Robinson) is having a tantrum on cue, thundering into a camera.

The Graduate is based on the 1967 film with a universally known plot, symbolized by the infamous stocking leg that has tempted Dustin Hoffman for 47 years. An older woman, Mrs. Robinson, seduces Braddock, the golden boy home from college. Disillusioned by his post-school prospects, he has a sex-fuelled affair with Mrs. Robinson, who is his father’s partner’s wife. Their winter-summer romance fizzles when Ben falls for the much younger Elaine — Mrs. Robinson’s daughter.

Turns out, disillusionment and aimlessness are timeless themes. Ben’s reluctance to either go to graduate school or get into business, or do anything at all, is something millennials will appreciate.

“I think he wants to have an authentic experience. He gets home and he kind of wakes up for the first time,” said Humphrey. “He’s been on autopilot, doing the right thing all the time.”

What has changed since the original film is how we see older women and sexuality. Anne Bancroft coming on to Dustin Hoffman in the 1967 film was shocking. Now, the word “cougar” — whether you think of it as degrading or empowering — has entered our lexicon as an older woman who sleeps with younger men. Humphrey feels that our attitude towards Mrs. Robinson has become more accepting.

“She was this homewrecker. Now, we want her to get out. She’s in a loveless marriage and she’s entrapped in this life,” says Humphrey. “We want her to get something out of this.” This new, more challenging interpretation gives the cast “more colours to work with,” he adds.

Ultimately, Ben seems like more of a dick than his seductress, jilting the elder Robinson to stalk the younger one. This version of the story, which is drawn from both the 1967 film and its source material, a 1963 novel by Charles Webb, makes all the characters come across as both pitiable and batshit crazy.

The sultry Robinson follows elegantly in the footsteps of Anne Bancroft and her Broadway counterpart, Kathleen Turner. Humphrey, a Canadian who grew up in L.A. and went from NYU straight to Stratford, does a Benjamin who is adorable, bumbling and deplorable. Marcel Jeannin and Jane Wheeler are hilarious as his shrill parents, while Alain Goulem expertly presents a swaggering, sad Mr. Robinson. Special props to frequent Shaver collaborator Graham Cuthbertson, who is the funniest person on stage in a variety of roles (and wigs).

The Graduate is padded out with original music. Shaver brought on Toronto-based singer-songwriters Justin Rutledge and Matthew Barber, with whom he’s worked with on previous projects. Clad in a sharp suits, Rutledge and Barber open the play with “Sound of Silence,” the iconic Simon and Garfunkel track that set the tone for the original film. They perform original, wistful songs through the rest of the show.

“We used a template of two guys with acoustic guitars. Matt and I work in that tradition anyway, so we didn’t really alter dramatically what we would do in our usual careers and usual styles of writing,” explains Rutledge. “We’re sort of, 50 years later, still following in that tradition of ‘folk singers.’”

“And there’s something timeless to that music — people still love that music today,” added Barber. “It hasn’t reached its expiry date.”

Audiences have agreed; the show has already been extended, with two extra shows added to the run.

For the older set, The Graduate is a trip into the recent past, with period music, voices and stylings. For those who weren’t alive then, it is a cougar-loves-boy story with vintage style, through an Instagram-hazy filter. ■

The Graduate, adapted by Terry Johnson, is on nightly at the Segal Centre (5170 Côte-Ste-Catherine) through Tuesday, Sept. 23, $44-$52. Tickets are available, but sold out and limited on some days. Go here for details, and to buy tickets.