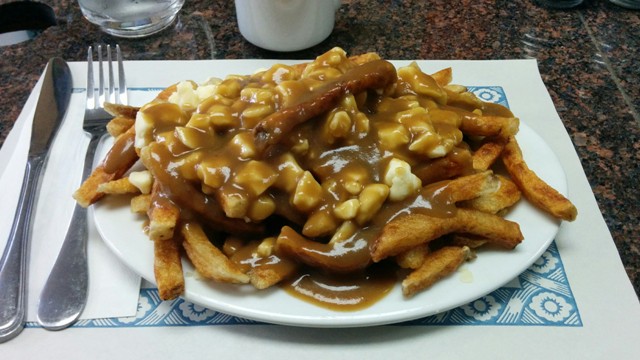 Right before the Easter holiday last spring, whilst chowin’ down at the counter of St-Henri’s Restaurant AA, the saucy, eye-shadow-lovin’, AC/DC-capped cook/waitress on duty asked me outta the blue:

I try to relegate my visits to this venerable Notre-Dame W. grease-titution to work-a-day hangovers, leaving weekends open to explore new and exotic greases. My answer came grunted through a mouthful of steamé, in the negative.

I was told the next couple of weekends would see overnight shutdowns to take care of a few renovations.

The following Tuesday, the restaurant remained closed, windows covered. Then a big wooden “we’re workin’ here” barricade got put up outside. The Easter miracle renovation was evidently nowhere close to over. In fact, one had to wonder if the resurrection would ever occur.

AA, or “Double A” to regulars (in part for our need to distinguish the eatery from our 12-step meetings) has always been an inauspicious little dive, it’s faded, sousmarins-and-brochettes-boasting, backlit sign a peripheral distraction, at best, from the neighbouring corner watering hole and its red-and-white-striped “Bar St. Pierre” sign, another neighbourhood relic.

I only found my way there myself two years back, enticed by my Cult MTL-delivering colleague to pop in for an early lunch.

Now I love a good Green Spot sit-down, and I even used to fuck with Restaurant St. Henri just to be grimy, even though it kinda sucked. But I had subliminally blocked AA outta my mind until that day. It’s that hood.

Turns out this place has been feeding the masses from 7 a.m. until about 4 a.m. since the ’60s. AA’s founder has worked the grill and the overnight shift for so long that high school sweethearts from the area’s yesteryear are now proud great-great-grandparents. His son holds it down during the day.

As much as I don’t think anyone in a city famous for as many greasy dives as Montreal is really looking for that eat-off-the-floors approach to hygiene and health, this place was due for an update. If it took a little longer than planned, chalk it up to a thorough job, well done. Double A looks great, without losing the worn-in comfort that made it so inviting to begin with. It’s a place you can bring your grandmother now – that is, if she isn’t only 39 and already working behind the counter.

On that first visit, my accomplice had sworn to me there was something about their sauce brune  (your only choice of gravy, by the way) and that “something” really is something.

This is not your salty, ersatz, hoof-based mess of mahogany-tinted fat. Double A’s gravy is a secret family recipe that takes seven hours to get right. I learned this one day when I wandered in only to have my hopes of a small bacon poutine dashed by the news that the fridge had broken down that morning.

“Buddy, I can sell you sour gravy,” the owner told me, seeing the dejection cross my face, “but I don’t think you’ll like it.”

That meant being patient for an extra day. I survived. Six months was another story altogether. I have several go-to poutine spots across the city that fulfill the need, but what AA specializes in, as far as I’m concerned, is consistent balance.

You could always actually taste the freshness in the cut of the fries, for one.  Not a hint of flavour has been lost to the upgraded deep fryer behind the counter, or its new batch of golden-clear oil.

Wherever their curds come from, they are of the squeakiest caliber, served cold under the hot gravy but resilient enough to avoid melting down entirely before the rest of the dish cools a little, thus leaving the eater with a perfectly tempered combo of poutine’s three clutch ingredients where every forkful delivers an equal measure of the sought-after perfect texture poutine-heads jones for.

My only complaint in general, if I can even call it that, is that I personally go for a little less cheese than the generous heaping AA tosses on there. A lotta places get that in reverse, but a simple “light on the cheese” restores that perfect balance I described. And I’ll further add that it only really affects the “mini” version of the dish, a side-sized poutine served in a bowl rather than on a plate, which results in a kind of soupiness toward the bottom if you take your time to eat.

The burger, meanwhile, holds its own against the la Belle’s and Lafleur’s of the province. Your otherwise fairly standard patty is shaped fresh, cooked from frozen, and retains a juiciness that makes it memorable among its thousands of peers out there. Great touch: they load your toppings on the bun as they grill it, giving your slaw and cheese and chance to get acquainted rather than slapped cold together like condiments on a Tinder date.

We’re talking about poutines and burgers here — the best review I can give here is that AA Restaurant is back and while the ambience is lighter, the goods are as heavy, delicious and affordable as you remember them. I am pleased to report that not a damn thing has changed. ■