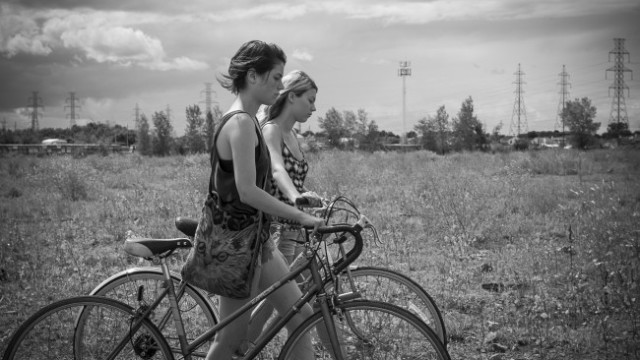 Tu dors Nicole is director Stéphane Lafleur’s third feature in eight years. It tells the elliptical story of 22-year-old Nicole’s (Julianne Côté) summer as she drifts between her job at a thrift store, hanging out with her best friend Veronique (Catherine St-Laurent) and dealing with her older brother (Marc-André Grondin) and his band, who have taken temporary residence in the living room of the family home. Through a series of vignettes, we accompany Nicole in treading water and fighting off the mounting pressures of boredom. I spoke with Lafleur a few days before the film hits theatres in Montreal. (Watch for my review tomorrow.)

Alex Rose: After I came back from seeing the film, I found myself struggling to explain it properly to someone. It’s very loose narratively, very sketchy. How did you come up with the original idea?

Stéphane Lafleur: My films are very much constructed as a collage — summing it up afterwards is almost impossible (laughs). Yet it’s also very simple. For this particular movie, I thought of the title first: Tu dors Nicole (You’re Sleeping, Nicole). I thought it was a good title and that there was probably a movie hiding in it! Nicole is kind of an old name, so I thought it would be interesting to give it to a character in her early 20s. That’s how I came to explore that age range in the movie, without necessarily wanting to create a portrait of the current generation. I wanted to remove all the technological points of reference and clichés and focus on the essence of how I perceive one’s early 20s to be.

I came up with the idea of setting it in the summer because your early 20s are an in-between period between adolescence and adulthood in the same way that summer functions as the in-between period for students. You’ve tried all kinds of things and you’ve pretty much lost your innocence, but you’re not quite an adult yet, despite beginning to have responsibilities.

I also came up with the idea of a band being in the movie without being the topic of the movie, working as a kind of background extra or nuisance for the characters to contend with in this otherwise calm house. By bringing all of these elements together with the character of the little boy, I had an idea going.

AR: Yesterday at the screening, the producer joked that it had been his idea to shoot in black-and-white for commercial purposes. We’ve seen it pop up sporadically recently with films like Nebraska and Frances Ha. All your previous films have been in colour — why the decision to shoot this one in black and white?

SL: There’s a long tradition of black and white films in American independent cinema — you mention Nebraska, but another one of the key ones for me was Jim Jarmusch’s Stranger Than Paradise. In my case, the choice grew organically from the idea of the film. I originally conceived of the film in colour as I was writing it, but then I met with (director of photography) Sara Mishara. She knew that I wanted to make a film set in the summer, that I wanted to shoot at night and that I wanted a certain level of detail that hearkened back to my own memories of summer. When you’re younger, it seems you’re closer to grass and asphalt and bugs; as you age, the tangible qualities of that aren’t as present. I wanted to express that but wasn’t sure how until Sara brought me some books by a photographer named Robert Adams who did a lot of B&W night photography of suburban scenes: people, trees, grass, landscapes and so on. Everything I was looking for was in those pictures.

AR: I did notice that at one point the Martin character says something to the effect of, “Everything moves slower in the summer” and that’s really reflected in the cinematography, the dreaminess of it.

SL: It’s crazy because we really had to rely on a ton of clichés and devices because you can’t really tell what time of the day it is in black and white. We had to use chirping crickets and other well-worn details like that to make sure that we could situate the scene in a time of day. With colour, you can really milk the light of dawn, but in black and white you don’t have those shades of light and colour as signifiers of the time of day. It’s something I hadn’t really thought of when I made the decision to go to black and white.

AR: At the premiere you mentioned that you toyed with the idea of shooting with a cast of non-professionals. Were it not that I’ve seen these actors before on TV and in other films — if I was from another country, let’s say — I might think that the actors in the film are non-professional. There’s a degree of spontaneity and naturalism to their performances that you don’t see often, but is in all your films. Is it hard to get that very specific tone from professionals?

SL: I have to direct them a little bit, but it was a bigger problem with my first film. My tone is more established now. The actors have a reference point, having seen the other films, and they know what kind of universe they’re stepping into. There’s always a good bit of humour in my films, and it’s always the same style of humour where I don’t want the actors to try to tag the joke or try to heighten it. The characters aren’t aware of the joke: they’re living it. My acting directions are generally pretty precise because what I want is for everyone to be in the same film together on an even plane. Sometimes I’m not happy with everything, but I might just be seeing the movie too much! ■