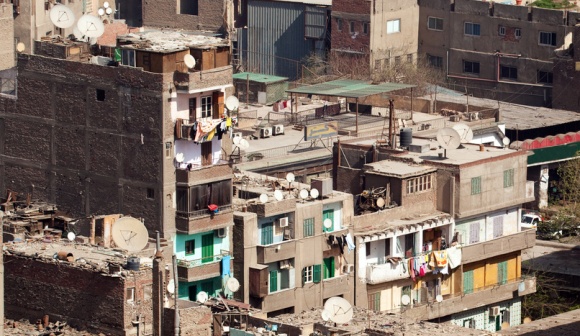 The word “slums” usually conjures a pretty specific idea: cramped, dirty living quarters stacked on top of each other, walls made from discarded sheet metal, earth floors… Most people would picture a Brazilian favela or reasonable facsimile, but the reality of slums worldwide is rather different. Jean-Nicolas Orhon’s Slums: Cities of Tomorrow observes the factors that led to the creation of these living situations in Mumbai, Morocco, New Jersey, France and Northern Quebec.

Orhon once had the same misconception about slums. “To me, a slum was something that was very chaotic with very little organization to it,” he explains.  Meeting with architect and UQAM professor Nicolas Reeves gave him a brand new outlook. Interested in the art of oral tradition and the transfer of knowledge through generations (two of his previous films dealt with preservation of francophone culture in Louisiana), Orhon saw in the world of slums an idea for a film.

“I met with Nicolas and he was telling me that, historically, cities were built up using knowledge that people from the country carried with them when they moved into an urban landscape. That’s the way that slums come into existence,” Orhon explains. “Just by looking at the layout of a slum, he could deduce what culture its inhabitants stemmed from.”

The word slum (or the much more sonorous and evocative French equivalent, bidonville) essentially refers to any makeshift collection of displaced citizens. Most (if not all) slums are essentially larger versions of a squat. The film depicts the Marseille slum, essentially an urban trailer park tucked away between skyscrapers, while the New Jersey slum is composed of campgrounds, tents and makeshift buildings constructed with tarps in the woods. The stories of its inhabitants are varied, but they all revolve around economic turmoil. Slums are, generally speaking, not a historical construction but rather one born of necessity.

Despite the very real problems of misery and poverty that compose these various slums, Orhon deliberately chose to make a film that observed them as an urban and architectural phenomenon rather than a social one. Although inhabitants are interviewed, their personal lives are not delved into. “I had to explain to the people we were filming that I wasn’t there to show poverty. There’s no point to it, and that’s not what my movie is about,” he says. When asked if it was hard to resist making the film about the daily struggles of the slums’ inhabitants, Orhon laughs. “The film should have been even more about architecture and urban planning. It should have been only that. If I had wanted to make a more political film, though, I would’ve had to get into the history and the politics of the last 60 years that led to the formation of slums, and that would’ve taken me away from my goal entirely.”

Beautifully shot and observed, Slums: Cities of Tomorrow is a fascinating look at an urban phenomenon that most of us know too little about. Orhon himself recognizes one caveat: the inhabitants are so fascinating and their stories sometimes so out of the ordinary that the viewer finds themselves inherently drawn to learning their story. It’s hinted that, for example, the New Jersey community is run by a church group with rather unorthodox methods that are never quite made clear. It’s a perfect set-up for a Louis Theroux-like doc that spends a good amount of time with the people, but that’s not the doc that Orhon set out to make. His film is an interesting and even-handed portrait of a misunderstood phenomenon. ■