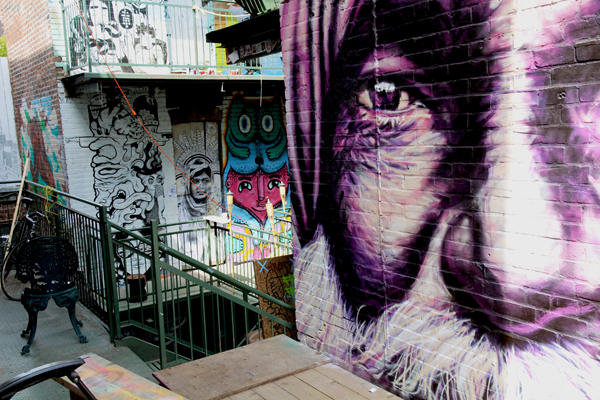 Montreal is a street art paradise, with enormous talent, a collaborative spirit and a rising profile thanks in part to festivals like Under Pressure and Mural Fest. While most artists enjoy the visibility that comes with finding a great spot, or the recognition from having their work disseminated online, sometimes artists just gotta create for art’s sake.

One such creative outpouring is going down right now in a secret location somewhere in the lower Plateau. The three-level inner courtyard space has turned into a living gallery representing a who’s who of Montreal’s established and emerging street art community, including organizer TurtleCaps and 38 other participating artists such as En Masse, Starchild Stela, HoarKor, Kevin Ledo, Miss Me, Axe, Tava, X-Ray and MC Baldassari.

Since the space is connected to a private residence, there won’t be any public access except for guided tours by appointment only for the media, taking place Friday, Aug. 29.

Despite the extremely limited access to the space, Cult MTL was given an exclusive sneak peek at the action a couple of days before the big reveal. The accompanying photos are the first look at the site for anybody who isn’t a contributing artist or resident.

The project has been labelled Cabane à Sucre by organizer and NYC transplant TurtleCaps, in homage to a similar intervention called Surplus Candy that was conducted in his home city by NYC artist Hanksy — in that case, over 40 artists decked out a condemned East Village brownstone shortly before the whole structure was downed by the wrecking ball. TurtleCaps suspects the Cabane à Sucres site will eventually meet a similar fate due to encroaching gentrification, and appreciates how the new collaboration is a way to bring the building back to life, if only briefly before its inevitable death.

As soon as he saw the space, TurtleCaps knew it was special. He began to call up some friends and collaborators to organize the project. “The line-up could highlight any major festival, but we’re doing it all without funding, we’re doing it all in 12 days, it’s not for anything but the love of painting. There are no egos here, no BS, no fancy vernissage. It’s really about returning the favour of people that were cool with me. I brought a high calibre of friends in and they all rallied around this project.”

Cabane à Sucre was originally not intended for mass dissemination, but as it took shape it became clear that it would be too big not to share, considering the star power of the assembled artists.

Though there will be limited access provided to media and select street-art enthusiasts to document the finished works, the location will stay secret and the creative process remains reserved for the collaborators to share amongst themselves. He explains, “I didn’t want cameras for this. I didn’t want there to be $25 DVDs on the ‘making of.’ I wanted it to be like, ‘If you’re not there, you missed it.’ Some moments are meant to be lived, not watched.” ■