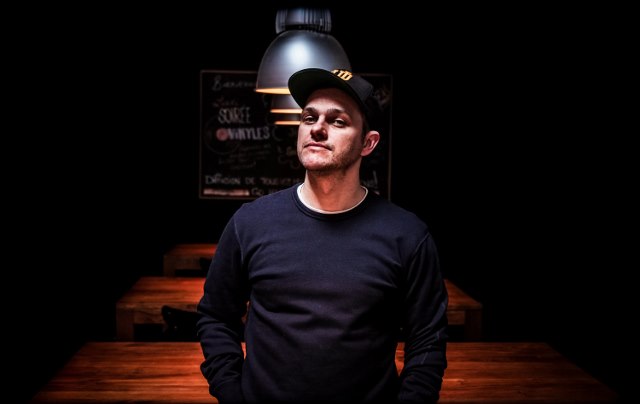 Montreal’s DJ Lexis has been a mainstay in DJ booths far and wide these past few years, but his hustle doesn’t stop when the needle is lifted. As curator of Music Is My Sanctuary, Lexis and his collaborators are purveyors of boutique-quality mixes, and Lexis is also the mind behind 24 Hours of Vinyl, a roving webcast that invites DJs in different cities to play wax ’round the clock for an entire day.

Lexis launched his redesigned website on Monday and celebrates seven years of MIMS at Piknic Élektronic this Sunday. He took a moment out of a busy week to speak to us by email.

Darcy MacDonald: Please introduce yourself and share a little background about how you became involved in music and the local scene prior to launching MIMS.
DJ Lexis: I grew up in a pretty artistic family — my dad and grandfather were both musicians, Mom works in the film industry. I went to a music school for seven years as a kid, but beyond all that I’ve always been a music nerd. I used to spend my lunch money on records. This all led up to me starting to DJ in 2000.
DM: How many times have you played Piknic? Are you an avid Piknic-eur?
DJL: Piknic has definitely made Montreal a better place with their events and solid bookings. Actually the funny thing with Piknic is that four of my last five bookings got cancelled because of the rain so I’m sort of affectionately known as the rain god by the staff. But not this year, I can feel it… not a single cloud in the sky!

DM: Congrats on seven years! Why the MIMS site redesign, now?
DJL: The site has a lot of content (around 3,000 articles) so having the cleanest design possible is really important. I was getting lost myself, in the old site. Staying three years on the same design is a long time just in terms of the change in design trends and key user features. We’ve been working on it for a year with an agency from Montreal called Tonton. Really happy with it.

DM: What made you want to launch the site seven years ago?
DJL: I was always the type to hand out mix CDs at all my gigs so it just started out as a way to get my mixes out there. I had no idea what I was getting into really.

DM: What was lacking on music blogs when you entered the arena? Was MIMS your first site?
DJL: MIMS was my first site, but when I started it, I didn’t have the vision of what I thought it could be. For the first three years, I wrote all the content and then I started having contributors. I’ve always been extremely careful about who I collaborate with. For me, it’s not only about music knowledge and sharing similar taste, it’s about having the same approach and relationship with music. The tone we try to have is passionate but humble. I avoid the purist / elitist attitude (as much as I can).

DM: There are some dope music sites in Montreal. What distinguishes yours?
DJL: We’re based in Montreal but I don’t consider it a “Montreal music website.” In terms of the music we cover, we don’t give any priority to Montreal artists. If we like it, then we’ll talk about it. The only thing that is truly MTL-centric are the events we organize.

I think it’s just a question of sticking to your original vision and not trying to get into the race of clicks and Facebook likes. Generally the sites who thrive and make it past year two or three are those who have a distinct voice. In theory, starting a website is very easy, but building a “brand” definitely takes a long time. And patience is not something that most web people have.

In terms of content, I think what distinguishes us is the fact that we cover old and new releases with the same focus and that we cover a very wide range of styles: hip hop, jazz, electronic, funk, U.K. garage etc.

DM: Please give our readers an idea of your global reach.
DJL: We get around 40 to 50,000 visitors a month, most of them from North America and Europe. Only around 20 per cent of our traffic is in Montreal.

DM: Who are your major contributors? Why do you think people like to contribute to MIMS?
DJL: We have around 20 contributors, about half of them in Montreal and the other half are from across the globe. I think they like contributing for the simple pleasure of sharing discoveries with an audience of open-minded music lovers.

DM: What do envision as the future of music blogging?
DJL: Tough question. I think the future is definitely brighter for people who are on the media or listening platform side of the industry. The people who have it much tougher are the labels, stores and artists. A big reason I’m motivated to keep running MIMS is to help those people.

DM: Do you have any studio projects on the go?
DJL: Well my main studio project is always the monthly radio show / mix  I do. It’s always been the focal point of the website and I still have tons of fun doing it. I take DJ mixes just as seriously as a producer when they’re making a track. I would love to have time to produce but I just don’t. My first reflex when I have free time is always music research. I guess it’s my main talent and I’m okay with that. If I end up releasing a song when I’m 75, I’ll be okay with that.

DM: Tell us about the 24hrs of Vinyl series. You’ve done it in other cities — any plans to bring it back?
DJL: The project is doing really well. We don’t do it very often because it’s just very difficult from a technical and physical aspect. But the next one is in San Francisco at the end of September. New York and Toronto, for the second time, will follow until we do another one in Montreal at Nuit Blanche in March 2015. But we’ve had lots of offers to bring it to places like London, Berlin, Tel Aviv.

DM: What’s next? And what haven’t I covered that you would like to mention?
DJL: Well I hope that people come out to our seventh anniversary party this weekend at Piknic. If you’re regulars to the website, come check out the brand new look, and if you’re new to MIMS, then come check us out! ■

Music Is My Sanctuary’s anniversary party happens as part this weekend’s Piknic Électronik at the alternate Jardin de Floralies site on Ile Notre-Dame on Sunday, Aug. 10, 2-11 p.m., $10 before 3 p.m./$15