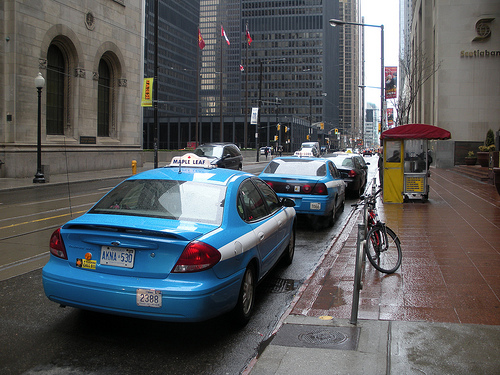 Cabs dressed in metro colours. The way of the future?

New Cabs for Cutie: Montreal wants to overhaul the taxi industry. Whether or not this will address recent alarm over passenger safety or drivers’ call for a vomit tax on queasy clients is unknown. What has been mentioned in today’s announcement is making credit/debit payments possible across the board, and standardizing the use of GPS devices — these are no-brainers. But what’s up with the uniform cabs talk?

Gaming crunch: Could some of Montreal’s smaller video game development studios be leaving for Ontario? The current provincial government made
cuts to the tax credits that studios in Quebec receive, and while the big boys are staying put, some of the little guys could be drawn to Ontario’s credits.

Mollybel: It’s nice to see Mirabel Airport in the news for something other than its razing: the RCMP seized 131 litres of synthetic drugs this past July, and a couple of Vancouverites were arrested in Montreal. Who will supply Ile Soniq now?!

Electrovroom: You may have seen a few Tesla electric cars around town, but they’re still somewhat exotic around these parts. There might be a quite a few more on the road soon — Tesla Motors is opening a dealership right by the Orange Julep later this year or early next. ■