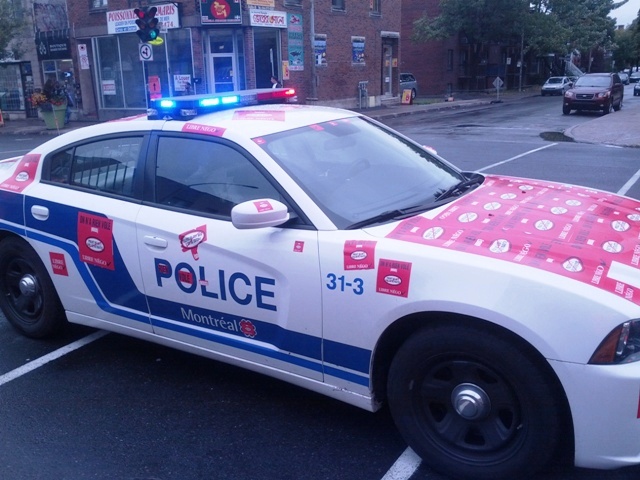 I was walking by an SPVM police station on Ste-Catherine the other night when I decided to engage in a little experiment. The window of the station and several police cars parked outside it were covered in those ubiquitous blue and red protest stickers attacking the Liberal government’s plans to unilaterally change the pension plans of municipal workers.

Some people equate the “On n’a rien volé” stickers with vandalism and think police and firefighters should be arrested for sticking them on city vehicles. The city has even hired a company to clean the stickers off, though they refuse to say how much they are paying the contractor, Solutions Graffiti. The cleaning company itself has been embroiled in controversy, accusing city blue-collar workers of threatening its employees and vandalizing one of its vehicles. In turn, firefighters at one station accused the clean-up crews with incompetence after they allegedly scratched the shit out of a painted crest on the side of a firetruck cab.

So how hard is it to remove these things anyway, I wondered? The unions say they ordered stickers that could be easily peeled off again without damaging property, so was the clean-up even necessary? And what’s the point, I would add, if city employees just slap them back on the next day?

So there I was, at about 2 in the morning, walking up to the window of a police station with a buddy and proceeding to peel off a protest sticker.

Yes, I had given some consideration to the potential reaction of any cop who might be driving by (the station itself was closed). But I concluded that if putting the stickers up wasn’t a crime, then taking them down likely wasn’t one either. Plus it was no doubt safer for me to peel it off a window of an empty station than to try peeling it off a cop car with actual cops in it.

Especially if it was moving.

It was disappointingly easy. I didn’t need an edged blade, I barely needed a dull fingernail to lift the corner of the sticker and start pulling it off the window. I lifted it part-way off, then rubbed it back on. I did this two or three times, trying to smooth out the bubbles like when you’re putting up wallpaper or coating a shelf with Mactac. In fact, it was almost exactly like Mactac, and when I lifted the sticker off completely and relocated it to another part of the window, I couldn’t even find traces of adhesive residue where the sticker had previously, um, stuck.

I invited my friend to try it as well, but he was visiting from Indonesia and I suspect he was leery of having his visit forcibly extended for the crime of destickering. But he did discreetly rub the window and confirm the complete lack of glue residue. So why, I wondered, was the city paying someone to “clean up” after the stickers?

Okay. So can we agree that the stickers are no more damaging than a henna tattoo? Try it yourself if you think I’m lying (but don’t say I told you to do it if you end up being arrested).

So let’s move on to the other type of anti-sticker complaints, like the one made by the guy who submitted this photo to CJAD.

Okay, first of all: lovely job, cop-car sticker artist! None of this lazy crap you see on most cop cars, where a few stickers are slapped on willy-nilly and no attention is paid to aesthetics, symmetry or form. The car in this photo is covered virtually head-to-toe, with just the word POLICE visible.

But Joe  Citizen, who would only identify himself as “Fred,” whined “I think it’s disgusting, and I think that if a little child who needs help looks at that, he won’t recognize it as a police car.”

Because the words POLICE on the front and sides, and the big police light-bars on the roof, and the police officers inside, aren’t enough of a hint. Nope, if the kid can’t see the full paint job, how can he tell it’s a cop car? (And if he’s THAT oblivious, he probably doesn’t realize that there are hundreds of more effective ways to find a cop to help you than simply waiting for a marked police car to appear serendipitously on the side of the road.)

“But it tarnishes the reputation of police when we see defaced cars and improper uniforms,” is the other lament I hear.

This is the kind of argument that comes from people who normally describe themselves as supporters of police. Apparently, though, that support does not extend to backing police in their struggle to protect their “generous” pensions. Pensions that local police negotiated as trade-off for the fact they there are among the most poorly paid in Canada.

The average wage for a constable in major Canadian cities: Halifax $37 an hour, Toronto $36, Vancouver $34, London $32, Winnipeg $26, P.E.I. $22, Montreal $20. So although SPVM officers may contribute a lower percentage of their fund than elsewhere, its coming from a lower salary pool and it will result in smaller average pensions at the end of the line. In addition, the city of Montreal took a 10-year unilateral “vacation” from making its own payments to the fund, depleting it of $825-million from 1997 to 2007. So although the current split is 30/70 in favour of the city, for a decade it was 100/0 in favour of the union members.

Yes, you read that right. Whatever multi-billion-dollar deficit figures you’ve been hearing about do not apply to the SPVM pension fund, which is healthy despite the city’s long vacation.

So the next time you get angry when you see a sticker on a cop car, take the time to peel the facts of the issue back a bit to see what lies underneath. You may be surprised at what you DON’T find. ■