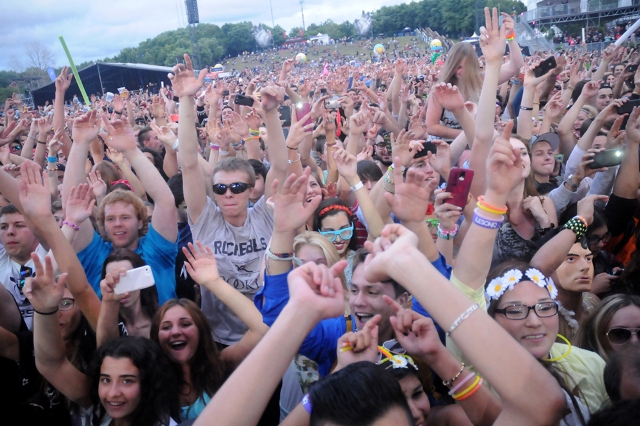 As I was making my way to the second day of the euphoric madness we now know as Île Soniq, I asked a few girls in the metro which acts were they looking forward the most: “We just follow wherever the BEAT is happening!”

The two-day EDM extravaganza debuted this past weekend with a mix of sunshine, torrential rain and plenty of optimism. One thing was clear from early on, nothing was going to stop people from having a great time — NOTHING!

Despite being the biggest musical phenomenon in the world right now, the EDM movement feels different, dare I say “underground” in a very peculiar way. When I first saw the line-up, I wasn’t familiar with at least 80 per cent of the artists, but perhaps that is just the point, as Afrika Bambaataa (who incidentally was in town last week) told us over 30 years ago: “Looking, searching, seeking for the perfect beat.”

Scattered over three stages, Île Soniq offered a mix of not only EDM but hip hop, baile funk, house and most electronic music subgenres. One of the best-kept secrets of the festival was the Neon stage, sandwiched between the two main stages. Sinden brought his mélange of U.K. garage and funky rhythms, gathering a more than modest crowd in the late afternoon of Day 1, while NYC’s the Knocks were giving a lesson in Dance Music History on the Oasis stage, mixing Marshall Jefferson’s “Move Your Body” with Technotronic’s “Pump Up the Jam,” creating an incredible atmosphere, and setting the scene for what was to come.

I then ventured to the often over-crowded Superheroes Anonymous stage, curated by local dubstep duo Adventure Club. I caught a bit of Botnek’s thunderous set before seeing what was probably my low point of the weekend, Iggy Azalea. Her vocals were inaudible and simply seemed out of place before Bingo Players. Needless to say I couldn’t miss Adventure Club’s homecoming, which, despite some technical difficulties at the beginning of their set, still managed to attracted a sizable audience before Tiësto pulled out all stops over at the Oasis stage.

It’s no wonder that he’s been consistently voted one of the best DJs in the world for the past decade. Playing a variety of material from his latest album, A Town Called Paradise, as well as classics spanning his career, Tiësto delivered the epic performance the day was building up to.

Day 2 got off to a rocky start with the cancellation of California rapper Tyga due to scheduling conflicts, but it was quickly forgotten as Chicago house legend DJ Pierre stepped in and tore the Mirage stage apart! Blending his signature brand of acid house with techno and EDM, he confirmed his lasting influence and deep understanding of the dynamics of the dancefloor.

With a giant mushroom set up on the right-hand side of the Oasis main stage, it was rather strange seeing Infected Mushroom relegated to the much smaller Mirage stage. The duo soldiered on and played against the pouring rain to deliver one of the most memorable performances of the weekend, while Laidback Luke closed the festival with help from a state of the art laser show and fireworks. This being said, he didn’t climax over what was built upon the previous day.

Île Soniq isn’t just about the music its the overall experience. The 17,500 people per day that attended will attest to that. The friendly, upbeat, mostly under-25 crowd took to wearing masks and costumes as if we were all attending the ultimate Summer Ball. Many international flags were proudly worn: Quebec, Canada, Germany, Columbia, Portugal and Iraq, among many others.

There’s no stopping this movement — Île Soniq proved there was a need for an event like this, which is long overdue in Montreal. It can only grow from here. If there is one thing to suggest to the organizers for future editions, we all could have very much benefited from a fourth stage Chill Room tent. As Festival Tip # 5 suggested: “Dancing is fun but don’t forget to take time to rest!”

Perhaps it would have been wiser to make this first edition a one-day event, but as I was leaving the festival grounds, I didn’t hear any complaints! Daft Punk invited us to lose ourselves to dance last year, and that we did!
It’s a real pity most media outlets only sensationalize the drug arrests and don’t see what this is all about. But weren’t they saying the same thing about Woodstock, some 45 years ago to the day? ■