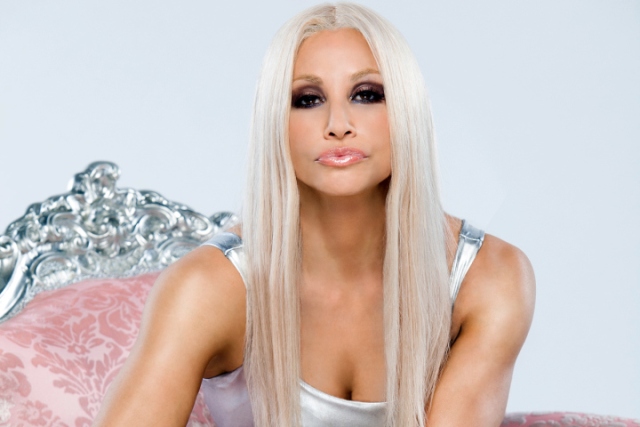 Does Montreal play itself? Most of the time, it stands in for Milan. This means establishing shots that are clearly stock footage or one shot of Marché Bonsecours that, from that particular angle, sort of looks like it could be in Milan.

Most egregious local landmark: Once again (though not particularly surprising considering we’re dealing with a Lifetime Original movie), the film is clearly shot here due to the cast but consists of 90 per cent interior sequences. The nightclub scenes are shot at Jazz Fest venue l’Astral and one outdoor scene appears to be shot on the mountain or perhaps at Beaver Lake.

Notable local talent: The majority of the supporting cast is local, many of them donning very terrible Italian accents for the cause. Émissions jeunesse mainstay Yan England plays one of Donatella Versace’s many lackeys and Mylène Dinh-Robic (of the anglo version of 19-2) plays a publicist. In a weird bit of Montreal trivia, the older version of Donatella’s son is played by Trevor Momesso, son of former Hab Sergio Momesso.

The world barely took notice, but the Lifetime Network began to change a few years ago. The typical Lifetime Original would probably have starred Shannen Doherty and focused either on cancer, overcoming odds, medical problems or abusive relationships (and sometimes a maelstrom of all of those). It would usually have weak thriller elements, a triumphant ending and at least one person you recognize from a show you’re embarrassed to watch amongs the supporting cast. A few years ago, however, Lifetime began diversifying its brand. They started hiring bonafide movie stars like Christina Ricci and Alfred Molina to star in their original films; they started relying on indie directors like Mary Harron (rather than TV-movie lifers) to helm them. Subjects changed into biopics and dramedies; though still aimed at women, they no longer followed the same expected structure.

Out of this upheaval was born House of Versace, Sara Sugerman’s mildly ridiculous look at the house of haute couture after the untimely death of its founder. Gina Gershon stars as the terrifying Donatella, vice-president and “spiritual voice” of the brand who does as much work hobnobbing with editors and movie stars as she does deciding what clothes are going to look like. When her brother Gianni (Enrico Colantoni, surely the hardest-working receding hairline in Canadian TV movie productions — he also played René Angélil in a production of similar calibre) is murdered by a serial killer in front of his Miami home, Donatella is horrified to discover that he has made 10-year-old daughter the sole heir of his vast fortune. Alongside her more conservative brother Santo (Colm Feore), she attempts to steer the ship back on track and develops a host of addictions and terrifying behaviours in the meantime.

Donatella Versace is such a ridiculous cartoon of a human being in real life that it seems impossible to make a film of her life with any more subtlety than Maya Rudolph gave her on SNL; fortunately, no one tried. Gershon’s Versace is all sneer and East Side Mario’s Italian accent, a reasonable drag facsimile of a nearly alien lifeform. Gershon’s always been a terrific but underrated actress and she goes back to the Showgirls well for inspiration. It’s unfortunate that the movie that surrounds Gershon is so tame; her flourishes are tempered somewhat by the even-keeled staging and performances surrounding her (Raquel Welch also pops up sporadically as Donatella’s aunt, for some reason).  For all of the hamminess inherent in Gershon’s performance (her laughs are particularly fantastic, monotone honks with absolutely no actual joy behind them), the film is rather lacklustre.

Oh sure, it has its moments, such as the bit where the creative spirit of Gianni manifests itself in the form of a CGI butterfly or the one where Donatella accidentally smashes a champagne glass into a chandelier and immediately goes into a fugue state. The Italian accents are all over the place yet remain uniformly terrible and it’s a bit dispiriting to see an actor as great as Colm Feore resorting to mostly standing cross-armed in the background of Gershon’s various freakouts. Yet it’s generally competent and attention-grabbing, though it offers no particular insights into the fashion world or this absurd pop-art android at its core. For all of its potential as some kind of TV-movie burlesque, House of Versace is actually… well… pretty okay. Shame. ■