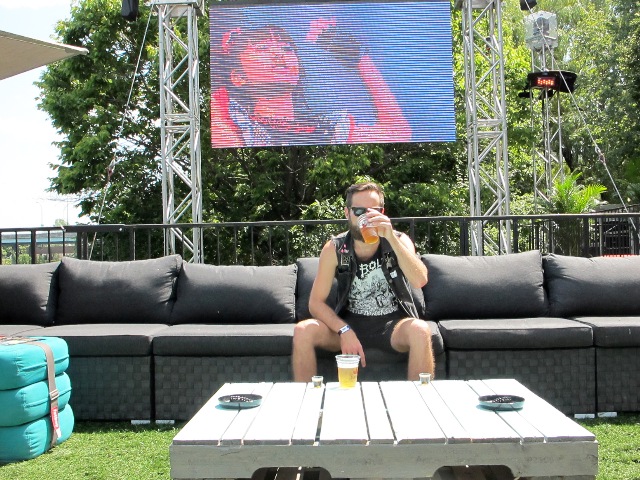 The author in the VIP. Photos by Mike Lecky

You will have to bear with me, as what follows is being wrenched from a completely de-habilitated brain wallowing in the freakish misery of the inevitable post-Heavy MTL hangover. I feel very much that if future me had the opportunity, he might strongly consider travelling back in time to murder pre-200 beers me in order to nip this whole nightmare of the flesh in its tender bud.

So, going into Heavy MTL (sorry, Heavy Montreal, a name change that I gather reflects the promoters’ decision to deprioritize the metal dimension of Montreal’s biggest metal festival in order to bring in such essential top-tier acts as uh, the Offspring, and Three Days Grace), which as you may or may not realize was for a great many people just a Metallica show with like 20 openers, I pretty much had my argument all laid out in advance.

A dog’s age ago, I watched an exceptionally terrible film called Terminator: Salvation, and it inspired me to reflect on the question of how a movie about armies of killer robots hunting human resistance fighters through a post-apocalyptic wasteland could somehow manage to not entertain a couple of shit-canned imbeciles desperately attempting to wile away the time on a return visit to the boring small town that they grew up in. For truly, if anyone is prepared to forgive the faults of a contemporary action movie (ABOUT KILLER ROBOTS AND EXPLOSIONS), it is two wasted dudes trying to find a way to not run into anyone they went to high school with.

This may be abstracted to “how bad must a thing be for those most in the grip of overdetermination to be unable to enjoy it?” and I was fully prepared to have to apply this analogy to Metallica — arguably the greatest heavy metal band of all time, who have been devoting the past 20 years of their existence to completely eating shit. Killer robot mayhem shares with heavy metal the quality of being immeasurably more awesome when you are shit out if your mind drunk, so I thought to myself, how bad would Metallica have to be for one to be unable to appreciate it while rippingly drunk? For even the songs themselves have been honed by the consumption of literally tens of thousands of beers — both in the writing, practicing, and touring of them by the band, from its adolescence onward, and in the similarly prodigious number of beers consumed by us in the honing of our appreciation for those songs.

I intended to insert a philosophically astute quotation here about alcohol improving the faculty of appreciation for beauty, but I have actually ruined my entire mind attempting to pursue this investigation.

In any event, however, such speculations were mooted in the blistering rush of the first 12 seconds of “Blackened” (even though they skipped my favourite 22 snare hits). It was like the sky was breaking open and riffs were pouring out, or to adopt a more prosaic but apt metaphor, like they were being shot out of a fire hose at you (there was also a literal fire hose, for shooting literal water at us, but in an arc, so it was less crazy). The set list — decided in advance by the online voting of fans — was excellent, and weighted toward the early brilliance of the band’s catalogue rather than the spectacular mediocrity of its last 20 years, and the songs were flawlessly executed. In what I suppose for the moment I will call an objective sense, Metallica was totally ripping.

But even this initial revelatory thrashing soon gave way to a curious numbness. Great songs, played well, very loud, but in the end one is just standing in front of the world’s largest stereo, peering at specks in the distance. We have all groaned over the almost military precision of Metallica’s attempts to eradicate their credibility and alienate their fanbase over the years, but was prepared to have that brushed aside in the aforementioned visceral pleasure of All the Riffs. However it was hard to shake the sense that one was watching tiny businessmen, magnified, building-sized on giant screens. Tiny businessmen, tossing out guitar picks and drum sticks by the bucketful in an unreflexive parody of the phenomenon of fetishization itself. From “this is the pick that Kirk used to play those songs,” to “this is the pick that Metallica had stamped out in their offshore Barbadian swag factory.” The centre cannot hold, for, quite simply, there is no centre.

My notes from the set read: “These arebtiny men on a giant screen. When I saw maiden is was tiny men biggrnes by ideas embiggened by robitz, and rafters and sailor shit. The rigging curled with the riffs. This was u2”, which pretty much says it.

And that is why in the end it was a band like Municipal Waste that really brought it home for me. A band who is hopelessly derivative of the early Bay Area thrash that Metallica helped bring shrieking into being so long ago, yet somehow so deeply earnest in their distillation of the genre to its fundamentals: drinking, circle pits, and ripping one’s own face off. Tucked away on the second side stage in the middle of the afternoon, generating positive mayhem, getting shit done. A vital reminder that heavy metal is music by scumbags for scumbags, next to which Metallica can’t but end up looking like the U2 of rock music.

Notable mentions also go to Three Days Grace, because Jesus, what a fucking mess. You gotta hand it to a band with a b-list Jared Leto for a singer doing a Doors cover and coyly avoiding finishing the line “Mother…I want to fuck you,” consequently proving that there is actually a way to be more annoying that Jim Morrison. Also Babymetal was pretty good. Not even joking. ■