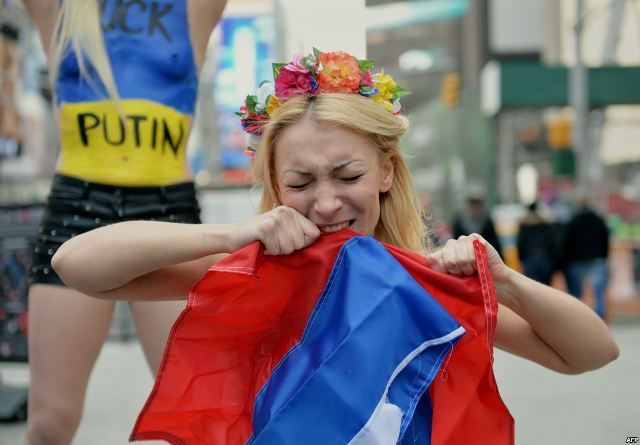 Disclaimer: One of my closest and dearest friends is Neda Topaloski, a member of FEMEN Quebec who you might have seen flinging herself topless around the Grand Prix or supposedly traumatizing children at that anti-abortion march in Ottawa. Hence, I am totally biased. Take that, J-school!

FEMEN is an interesting group: they incite such a strong reaction that they actually seem to unite right and left-wing camps in hatred. Ironically, more of the hate seems to come from the left. While the right just discard them as stupid whores or bitches (based on the kind of lovely messages Neda receives), the left are deeply, deeply offended, as if FEMEN’s tits are ruining everything they’ve worked for. Their tits will rescind our right to vote and put us back in the kitchen where we belong! A dude in a panda outfit protesting is totally legit, but put those damn tits away!

If you’ve ever actually spoken with members of FEMEN, which I’ve been forced to do repeatedly because that’s just how friendship works, you’ll have found that, yes, they’re total babes, but they’re also frighteningly brainy babes. Personally, during a recent conversation with Neda and FEMEN Quebec’s founder Xenia Chernyshova, I barely got a word in, because a) I was a little scared and b) they have A LOT to say (like, A LOT), which doesn’t always come across in mainstream media coverage or when you go up to them in a bar to tell them that you’re studying Gender Studies and that you know what they’re doing is wrong and you’re about to tell them exactly why without giving them a chance to respond (which also happens to Neda).

Lately, a few documentaries (Ukraine Is Not a Brothel, Naked War, VICE’s Sextremism in Paris) have delved a bit deeper into answering such questions as “who are these crazy, half-naked yelling chicks?” and “what the fuck are they doing?” The most recent of these is Swiss filmmaker Alain Margot’s I Am FEMEN, which follows the Ukrainian branch of the group from 2010 to 2013 and mainly focuses on the artist of the gang, Oksana Schachko, who founded FEMEN with Anna Hutsol, Alexandra Shevchenko and later, Inna Shevchenko.

Schachko’s narration is the backbone of the film and it’s from her perspective that Margot documents the founding of FEMEN, their decision to go topless and their many controversial protests, from chopping down a cross in support of Pussy Riot to getting abducted in Belarus. The end result is a touching and interesting portrait of an articulate and passionate young woman, but a slightly clumsy film that struggles in balancing Schachko’s story with the facts behind FEMEN, as if Margot couldn’t decide whether he wanted to make a more personal or informative film. He doesn’t really succeed in making it both. There’s a lot that happens to the women in three years, and in a probable effort to include everything, there’s some stuff that’s skimmed over. For example, after their kidnapping in Belarus, we only hear about their ordeal through clips of the press conference and Schachko does not discuss it in the more intimate interviews. Same goes for her two-week detention in Moscow. As for the notorious Victor Svyatski, he’s briefly shown goofily juggling and quite simply described as another member and a “male feminist,” perhaps as a response to Ukraine Is Not a Brothel, where he came off as “the Patriarchy.”

That being said, there’s a lot of interesting stuff in here for anyone curious or enamoured by FEMEN, or anyone who might want to do a bit of hate-watching. On the subject of their looks, Hutsol argues that beautiful women are used to sell cars and beers, so why not use them to sell a political message? “Nudity and politics make for an explosive combination,” says Schachko at one point, explaining that they decided to go topless to get media attention to causes they believed in. And it worked.

The more you read or watch about FEMEN, the more you see that the main issue people seem to have with them relates to their beauty and their tits. So what? People want to know what they’re trying to achieve, what’s the point, etc. Well, you could say that about any protest, couldn’t you? The world is fucked, take your top off and yell. Fuck it, I AM FEMEN TOO. ■

See our review of Ukraine Is Not a Brothel, and interview with Xenia Chernyshova here