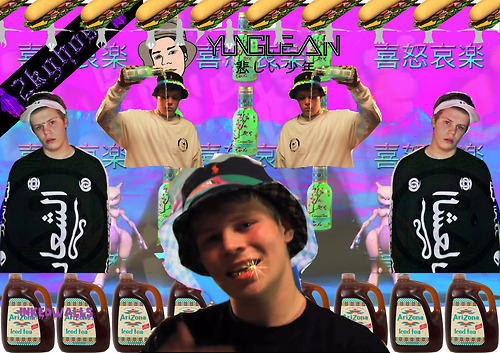 If there were disbelievers in attendance who were simply there to gawk at the unlikely Swedish rap star on his maiden North American jaunt, they were clearly in the minority. This was a darkened room filled with emotional acolytes who saw themselves in Lean’s meandering, hypnotic rhymes about universal teenage life (his subjects of interest include Arizona Iced Tea and Mario Kart). Around 45 minutes before Lean took the stage, the realization set in that this was going to be a real rap show. Not long after, it was a mad dash of pushing and shoving to the front of the stage for his passionate fans, who dressed the part with their bucket hats.

By the time the 17-year-old rapper, his hypeman and his two beatmakers took their places, people were fighting to get towards the stage, and onto every riser in the venue.

If Yung Lean looked and acted like a confused kid emulating his hip hop heroes in his earliest videos, the one that showed up in Montreal was one who has been practising hard in the mirror ever since those first uploads. His evolution into a performer mirrors the trajectory of the many indie-pop bedroom artists who found themselves tasked with developing a live show out of a few stray laptop productions they posted on Soundcloud. Some of the hazy, languid post-Based songs from his Unknown Death EP, like “Gatorade” and “Hurt,” have been rebuilt as hard trap bangers, and he’s clearly more confident in shouting out his hooks now that the public has approved of their quality. This increased energy only pushed an already hyped crowd into overdrive.

As surprisingly pro as Lean and his crew were, his unhinged Montreal fans stole the show. I lasted about three songs in the throng of his emotional worshippers in the front — it was as much of a sweaty baptismal as I could handle — and spent the rest of the set nursing my iced tea can a little bit further back. From the couches, it looked like a zombie invasion, where the audience had determined that Lean had the juiciest brain in the room. The room was dark, but the silhouettes of dozens of outstretched arms could be seen reaching towards the man of the hour.

I’ve seen joke-rapper Riff Raff in concert before – you spend about 10 minutes laughing before realizing it’s a tiring one-note shtick – and Yung Lean’s set was anything but (it did remind of Lil B’s Pop Montreal visit from a few years back, though). People were genuinely connecting with his performance and respecting his material. The audience didn’t just sing every line to “Ginseng Strip 2002” — they screamed them.

And interest didn’t dwindle either. Lean saved his best and most recent songs — “Kyoto,” “Motorola” and “Yoshi City” — for later in the night. By then there was more space on the floor to mimic various poppings and lockings, and there was plenty of both.

Astonishingly, it would appear that both Yung Lean and his fans are very real. If there were any conclusions to draw about Internet fame from this show, it’s that in this new, democratized rap world, amateurism isn’t considered a drawback — it’s a form of authenticity. ■