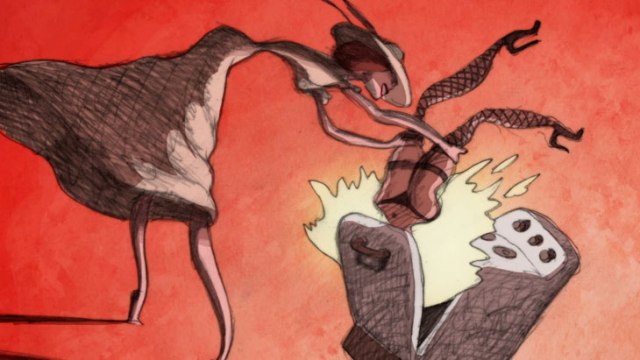 Legendary independent animator Bill Plympton’s first film in five years continues Idiots and Angels’ move away from the comedic excess of his first films towards plot-driven abstraction. Completely devoid of dialogue and relying solely on grunts, laughs, wordless chatter and other onomatopoeia to drive the story, the Kickstarter-funded Cheatin’ is a kaleidoscopic noir that marries Plympton’s trippy hand-drawn aesthetic to a warped love story somewhere between The Postman Always Rings Twice and a Russ Meyer film.

It’s love at first sight when muscle-bound gas attendant Jake saves the beautiful Ella from certain death at the hands of a malfunctioning bumper car. The two are quickly married and enjoy almost non-stop marital bliss soon thereafter. Jake, however, catches the eye of nearly every woman in town — one particularly crafty redhead catches Ella naked with a bunch of department store mannequins and uses the resulting picture to convince Jake that his wife is cheating on him, sending both Jake and Ella in a downward spiral of depression and excess.

Cheatin’ is more devoted to plot than the trippy free-association that sometimes characterizes Plympton’s work, but that hardly means that it’s some kind of densely-plotted, labyrinthine thriller (it sort of veers off into the unknown by the third act, but that may be by design) or that Plympton doesn’t indulge in imagery like a toaster spewing forth policemen or a grotesque army of babies. It’s a sensorial experiment first and foremost, a sun-bleached desert noir in the underground tradition. Plympton’s always forged his own path (he reportedly turned down Disney’s Aladdin due to lack of total control) and while Cheatin’ may not be as grotesquely memorable as some of his other films, it remains a blast. (Alex Rose) 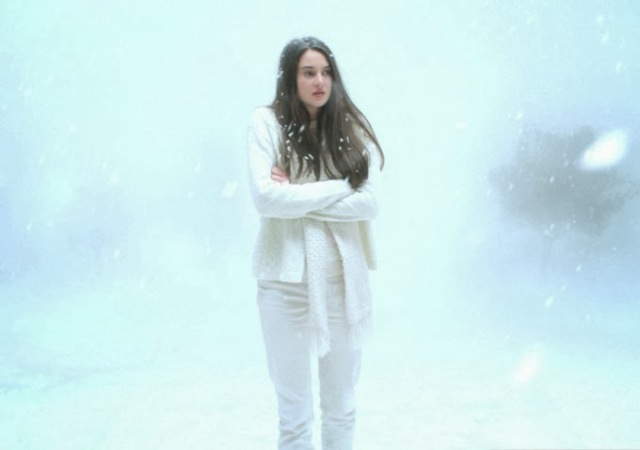 White Bird in a Blizzard

White Bird in a Blizzard is a finely crafted puzzle and a great piece of filmmaking. It is the latest work from Gregg Araki, best known for The Doom Generation, demonstrating that he has matured into a masterful filmmaker. Unlike his earliest films, White Bird has an eerily calm facade with a beautifully sustained melancholic tone; the subversiveness is more subtle, but it’s there nonetheless.

White Bird in a Blizzard concerns the disappearance of a suburban housewife, Eve (Eva Green), in 1988, and the repercussions for those she left behind, particularly her teenage daughter, Kat (Shailene Woodley, of The Fault in Our Stars fame). The narrative is revealed in pieces out of time, which easily coalesce into a fluid whole; Araki maps out the tortured relationship between a mother and daughter, and a husband and wife, guided by Kat’s narration. Eve is a vivid portrait of a proud, caustic woman whose sense of purpose died after her initial life goals (husband, house, child) are attained. Trapped in a sexless marriage, Eve turns to alcohol, and takes her frustration out, not only on her woeful husband Brock (Christopher Meloni), but on Kat as her sexuality blooms with the boy next door, reminding Eve of what she once had.

Despite being well trodden territory, this suburban malaise is rendered new, mysterious, and even somewhat beautiful (in the vein of American Beauty or Donnie Darko) by Araki’s artful eye. The film oozes emotion. Kat’s perspective is central to this effect. Her contentious relationship with her mother, revealed through flashbacks, accentuates how devoid of feeling she is towards her post-disappearance. The cold indifference she exudes is palpable on screen, vividly conveyed in Woodley’s remarkably tough-minded performance. Another crucial element is Green’s pitch-perfect portrayal; with her stinging rasp and haute-couture looks, Green is a terrifying, vengeful figure. She’s the embodiment of the past you want to erase from memory and reminds you why Norman Bates killed his mother. As the film goes on, of course, you realise things are not as simple as they initially appear.

Integral to the film is the excellent ensemble cast, in fact, ranging from Christopher Meloni to Gabourey Sidibe (of Precious) and Mark Indelicato as Kat’s irreverent friends. These characters are well-developed and interesting, revealing untold depths. Typical of Araki, the thick period atmosphere is heightened by the soundtrack – vintage late ’80’s tracks by the likes of the Cure, New Order, and the Jesus And Mary Chain. The songs aren’t just period markers; their overwhelmingly plaintive tone reminds us of the feelings we try to keep buried, but can’t. Ultimately, White Bird in a Blizzard is a moving picture of how we only see and remember what we want to, as well as the pain that that can cause. (Katie Ferrar & Mark Carpenter)