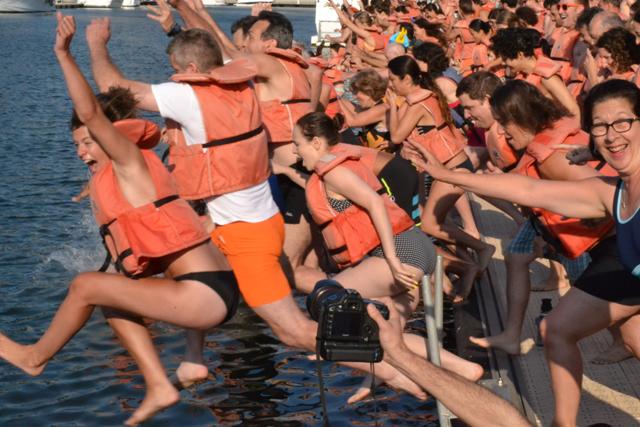 Jump! Photos by Joel Barde (scroll down for more)

It’s hot as hell, and it’s going to be for the rest of the week. If you’re looking to cool off, you could hit the pools. But why not take a dip in the St. Lawrence?

We are, after all, surrounded by it.

If you’re like many Montrealers, an aversion to weird, sketchy skin rashes, sore eyes and diarrhea might factor into your decision.

But this morning, around 200 people gathered along the Quai Jacques-Cartier in the Old Port and made the plunge en masse. They want to prove a point: It’s safe, and fun.

Le Grand Splash is in its 11th year and is growing in popularity. In fact, making the jump has even become a political statement. A number of city councillors, including Projet Montréal leader Richard Bergeron, took part.

One of the event organizers, longtime environmentalist Pierre Lussier, says the event seeks to debunk an out-dated, widely held belief that the river is unsafe for swimming.

The water quality is monitored closely by a provincial agency called the Réseau de suivi du milieu aquatique (RSMA), he says, standing along the wooden boardwalk, where a group of swimmers laid out towels and soaked up the morning heat following their dip.

“And the [RSMA] show that the fecal coliforms level is less than 10 in this area,” he says.

When ingested, water with a high concentration of coliforms can make you sick.  Swimming becomes hazardous and unadvisable, he adds, when levels reach 200, as measured by 100 millilitres of water.

Andrea Gonzales Marques brought along two friends visiting from Mexico. She says she visits the Old Port often, but never thought to jump in. “I just figured you’d be arrested,” she says.

Ganzales Marques echoed a lot of people, saying she’d like to see a permanent swimming structure in the area.

The city is in fact currently expanding its number of public beaches, adding ones in Verdun and Montreal East. But there is no plan for any project in the heart of the city, the Old Port.

Le Comité Citoyen Montreal Baignade, the citizens coalition that organized the event, would like that to change. They suggest a permanent swimming facility modelled after Copenhagen’s Harbour Baths. The baths are basically cordoned off, patrolled areas along the city’s rivers, featuring nice boardwalks for sunbathing and structures for people to jump off. This Danish set-up is credited with transforming a former industrial section of the city into a cultural and social hub.

For Lussier, building such a structure would give more Montrealers access to the St. Lawrence, and help to further dispel the stigma surrounding swimming in it.

8,578 cases of COVID-19 / Coronavirus have been reported across Canada according to the Public Health Agency of Canada.

There are 1,991 known cases of COVID-19 in the city right now. Here’s how they break down by borough.