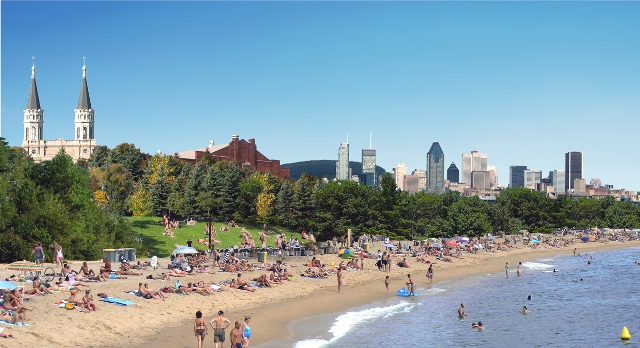 Anything is possible: Today, the Marché des Possibles opens in the Mile End, in the parking lot above St-Louis Arena. A joint effort between Pop Montreal and the borough, the open air market will feature a biergarten, fresh produce, vendors and the many things that make Mile End tick. That means music, too: There’s a launch show tonight with Socalled, Brad Barr, Donzelle and Mathématique.

Really, anything: Come 2017, we may be tanning by and swimming in the St. Lawrence thanks to a new beach in Verdun. The site of the proposed sandy hang-out spot, currently a dumping ground for snow in the winter, is located by LaSalle Blvd., near the Douglas. Verdun mayor Jean-François Parenteau has said that the beach will open in time for Montreal’s 375th anniversary. But we’ll believe it when we see it — we’ve heard this one before.

E-Sports: This year’s inaugural Mondial de Jeux video gaming festival – which kicks off tomorrow as part of Just for Laughs – will play host to the North American qualifying of the Electronic Sports World Cup, a France-based competitive gaming league. Can playing Call of Duty: Ghosts and Counter-Strike: Global Offensive at a high level be considered sporting? It’s a never-ending debate, and it’s coming here. (Keep an eye on Cult MTL for a more in-depth preview on the event).

Animal house: The city announced this week that a new animal control centre for strays will be coming to Pie-IX Blvd. in 2018. Such a place is long overdue: Berger Blanc is still synonymous with death, and the city wants to curb its animal euthanasia problem.

Leaving town: Could Montreal be looking at a new round of demergers? With changes coming to how the boroughs receive their dough (i.e. less of it), the likes of Île-Bizard–Ste-Geneviève are yearning for freedom, not unlike their long-demerged West Island brethren. Anjou’s not feeling the changes either.

Not this again: Look, I love baseball and it would be great to get the Expos back, but the truth is there’s no team forthcoming, and now we’re being used as bait for other teams looking to finagle new deals from their current host cities. Washington had to wait 33 years to get their team back. We haven’t even reached a decade yet. ■