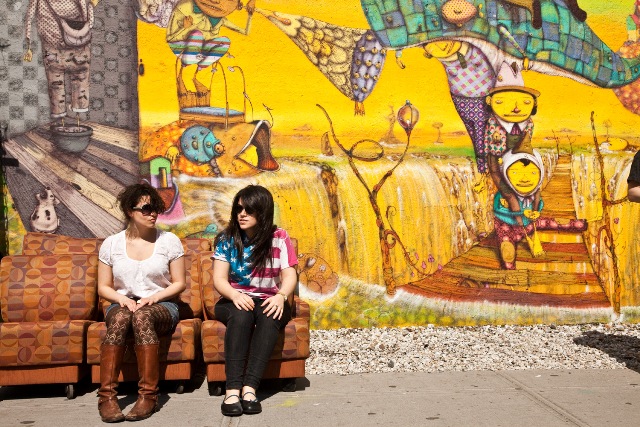 In real life, Broad City creators, writers and stars Ilana Glazer and Abbi Jacobson are all business, hard at work filming the second season of their successful web series-turned-Comedy Central show, set to air early next year. At the same time, the bawdy broads are hoping their heightened television doppeldames, also named Ilana and Abbi, remain stuck in unsuccessful slacker limbo for years to come.

“We sometimes try to remember what it was like before we even had the web series,” says Glazer. “We’re friends. We hung out.”

If the television show is to be taken at face value—and it probably shouldn’t — the New Yorkers spent their pre-success days getting high, dealing with roommates, working soul sucking jobs for meagre pay and having humorous hook-ups.

“Each episode takes place over a day, for the most part, so we have time to let them be young,” says Jacobson. “We’ll let them mess up for a lot longer.”

Adds Glazer: “We’re still deciding where to go in the future, but we’re having fun being young through our characters.”

“We’re really in our 50’s, so it’s nice to go back and relive our youth,” jokes Jacobson.

Since almost the beginning, the dynamic duo has had a friendship/business dichotomy. They met at Upright Citizens Brigade comedy school — the current defacto AAA-affiliate to SNL’s major leagues—in 2007, and also worked sales together for a beauty and health company.

While most young people in dead-end sales jobs would resort to heavy drinking to get through the week, Glazer and Jacobson wrote Broad City webisodes before and after work. The series made its YouTube debut in 2009, and those shorts eventually led to the Amy Poehler-backed (she’s an executive producer) television series, which premiered earlier this year.

Much of the praise heaped on the series so far has astutely observed that Ilana and Abbi’s television camaraderie — which they compare to that of Friends bros Joey and Chandler — is an uncommonly realistic portrayal of a strong female friendship for the small screen. The goofy, loyal pair pass the Bechdel test with flying colours, and lack the animus of the wretches who populate that other famous show about girls in New York. Even the Big Apple seems considerably cheerier and brighter through Broad City’s lens.

Much like Louis CK’s hit meta-comedy show Louie, Broad City’s New York is surreal and whimsical. In one episode, Abbi takes a strange, circuitous journey hunting down a package for her handsome, bearded neighbour.

“In the moment, sometimes New York can really feel like that, so we want to keep having those scenes,” says Glazer. Most of the show is filmed on location, which isn’t without its occasional hiccups.

“It’s such a busy, frantic city, but it’s great to shoot in real locations because there’s always something going on in the background,” says Jacobson.

For their Just for Laughs festival debut, they’ll be presenting Broad City Live, a show they perform monthly in New York and will take on tour this fall. They won’t be in character on stage, but will instead be their real, writer selves.

“The television show is tight and polished, but live, it’s more weird and experimental,” Glazer says.

The differences between the two formats hasn’t stopped fans from shouting out their favourite quotes from the show’s first season to the pair.

Glazer also has advice for Montreal fans planning on catching the show.

“It would be nice if people were a little loosened up beforehand,” she says.

“You mean alcohol?” Asks Jacobson, to which Glazer replies in a squeaky voice occasionally employed by her character on her show.