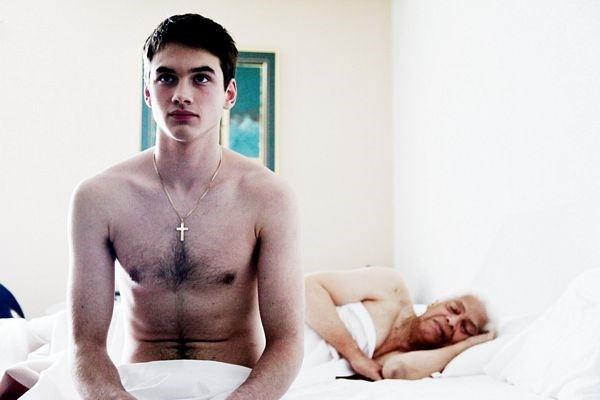 When I was in high school, I took advantage of a trip to Toronto to attend a screening of Bruce LaBruce’s No Skin Off My Ass. I fancied myself a supremely sophisticated underground film connoisseur, but I was unprepared for this.

Not only did it have hardcore gay sex, but it was shockingly, almost gleefully amateurish. Shot on Super 8, it had “sync” dialogue that barely bothered to actually synchronize with the actors’ lips. And when an action scene was required, the director simply inserted one from a Hollywood film, shot off a TV set. LaBruce himself was in attendance, in his element thriving on the outrageousness of it all with an artfully affected nonchalance.

Twenty years and 10 features later, LaBruce has transformed from young shit-disturber to elder statesman of queer cinema. But he still knows how to provoke: his latest, Gerontophilia (released in Montreal on July 4) tackles one of the few sexual taboos left with its depiction of an affair between nursing home patient Mr. Peabody (Walter Borden) and his young attendant Lake (Pier-Gabriel Lajoie), who becomes smitten with Peabody and begins giving him a special level of care. After they’re caught in the act, he breaks him out of the home to go on a cross-country road trip, but there are still twists to come.

“I kept on reading about the baby boomer generation who are getting older, and people are living longer,” LaBruce recalls in a phone interview. “Nursing homes are overcrowded, there aren’t enough people to take care of them, they’re being over-medicated. A lot of sexual things are going on in these institutions, and they try to discourage the elderly from having sex lives. It seemed topical.

The film’s depiction of intergenerational love is graceful, never played for laughs or gross-out value. LaBruce explains that he wanted to counter the way senior sex is usually depicted onscreen. “It’s always represented as either predatory or grotesque, that any expression of sexuality is something to be laughed at. I was playing with those assumptions and imagining a world where there weren’t those prejudices.”

The film is shot and set in Montreal, and Lake’s dialogue with his troubled mother (Marie-Hélène Thibault) is all in French. LaBruce candidly admits that the setting came about for financial reasons, when Quebec’s film funding body SODEC expressed interest whereas Toronto’s Telefilm took a pass. But, in collaboration with local writer Daniel Allen Cox, “we tried to add things that are authentic to Quebec,” LaBruce says. Perhaps throwing his audience a bone, he adds: “Who wouldn’t want to shoot in Montreal?”

LaBruce has high praise for his two stars. “This was a different process for me because I usually make films with a lot of non-actors. This time, we went through casting agencies,” he says. “Pierre-Luc is straight in real life, but he was really open-minded. Walter has been a gay activist and a black activist in Canada since the ’60s. He’s a very dignified man and very inspiring — he’s 81 and still acting. We were all in awe of his energy and his stamina. And he was very generous with showing his body.”

In spite of its taboo-breaking mission, Gerontophilia is a sweet film, lacking the punk provocation of LaBruce’s early work. But he bristles a bit when I call it sentimental. “I tried to steer away from what I would call sentimental. There’s a gentle and romantic quality. It’s not so much sentimental as an idealized world. I wanted it to be more subtly subversive. There is a problem of treating older people with too much sentimentality — I didn’t want it to be Cocoon. But even in my really harsh movies that have pornography in them, there’s some sentimentality.”

LaBruce may be mellowing with age, but he’s keeping busy, with a new film, Pierrot Lunaire, already making the festival rounds worldwide and another in post-production, as well as a perfume, Obscenity, launching soon in New York. And shortly after we spoke, the Toronto International Film Festival — the same folks who’d organized that long-ago screening I attended — saluted LaBruce’s career with a retrospective series.

“They keep on throwing retrospectives at me every five years or so, I don’t know why,” he says with a little of the old insouciance. “Sometimes it feels like an honour and sometimes it feels like a premature burial. I’m being facetious, but retrospectives are often at the end of a career. When you’re more mid-career, as I hope I am, you don’t want them to bury you before you’re done.” ■