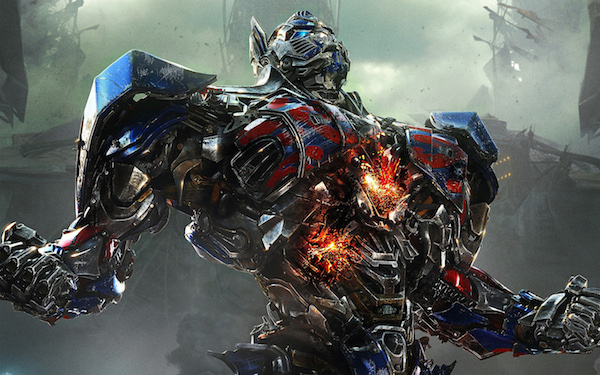 Disclaimer: I haven’t seen any of the other Transformers movies, or know anything about Transformers in general, except that they’re trucks that turn into fighting robots and that middle-aged, baldy corporate types and budding teenage hipsters wear the robot head t-shirts with equal dedication for nerd cred. But, as usual, I said yes to doing something I didn’t really know anything about. Carpe diem! Eat shit, nerds!

In his fourth venture into talking-robot land, the Smegma of the Seventh Art replaced the formerly famous Shia LaBeouf (who?) with everyone’s favourite Bostonian, Mark Wahlberg, who really proves his acting range by playing a guy from Texas. Wahlberg is an inventor named Cade Yeager who lives on a ranch where he makes robots with his ridiculously hot teenage daughter Tessa (Nicola Peltz) — and up her tiny jean shorts is where monsieur Bay keeps his camera for the first half of the film.

One day, one sunny day (I’m really trying to construct a plot here), Wahlberg repairs Optimus Prime, who is, like, the main robot dude, which really pisses off Kelsey Grammer, because he’s CIA and in cahoots with Stanley Tucci, who is trying to build alien robots and accidentally resurrects Megatron, but Grammer is also allied with this other big alien robot guy who is super pissed, too. So, everyone’s really pissed at each other and fights for three hours, while bottles of Bud Light litter the streets, Victoria Secret buses explode, Tucci holds up the Original Beats Pill and Wahlberg repeatedly tells his sexy daughter that he loves her. Oh, and they all just travel to China at one point, probably because Bay wanted to stuff more product placements in there and thought we wouldn’t notice if it was Chinese products for half the film.

I’m going to give Michael Bay a chance here and say that this film might have been good if it had been 15 minutes long, instead of three (!) fucking hours. During the last stretch of the film, I’m not sure why, maybe because I had lost my mind, or maybe because Optimus Prime turns to Wahlberg and tells him to “look at the stars and he’ll see his soul,” before flying off to space, but I started laughing hysterically, to tears. So, that’s another positive… probably. Bay once complained that critics didn’t like his films because he made movies for teenage boys. Well, teenage boys, you’re a tech-savvy bunch, you’re the Internet generation, do what you do best: stay home, masturbate and Snap Chat or whatever, illegally download the crap out of this movie and save your allowance money for cigarettes and Bacardi Breezers. ■