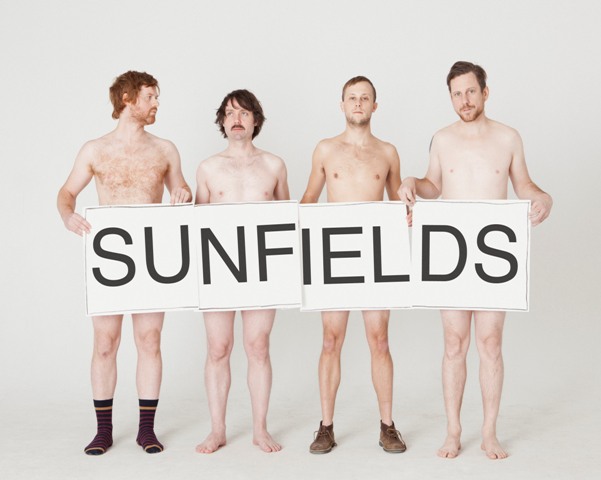 Sunfields make music that hones in on that sweet spot between hazy nostalgia and timeless rock urgency. The band is fronted by Jason Kent, a guitarist well known to anyone who’s followed the Montreal music scene for the past decade — he’s a former member of Soft Canyon, the Sonny Best Band and the Dears, and has written, produced and played with loads more artists, most recently accompanying Kandle. He made a solo record in 2006, and that project soon developed into a band. In 2010 Sunfields released their debut LP, Palace in the Sun, and its follow-up, Habitat, came out last week, on May 27.

“I really like it,” says Kent, who spoke to me as he stepped out of his day job at Centre Luna Yoga, which he’s owned and operated with his girlfriend since 2003. “We had nearly 30 songs and it was really difficult to choose which ones to put on the record. I tried to make it true to the live show, because I wanted songs we could play live, without studio trickery and Sgt. Pepper’s-style voodoo.”

The record was mixed by Graeme Humphrey and mastered by Guy Hebert and Harris Newman, but as with all of Kent’s records to date, it was self-produced, recorded between Breakglass Studios, Sunfields’ Field Recordings space and home, with Kent’s newborn son Levi crying in the background.

“I love producers but I guess either I can’t afford them or I’m too confident in thinking that I can produce my own records,” Kent explains. “I like to digest the songs; I sit with them for a long time, and there are always three or four mixes. With the first single, ‘Ghost,’ there was my mix, there was Phil [Burns]’s mix, there was Chris [Roberts]’ mix and there was my girlfriend’s mix, and it was hard to choose which one was the best. The girlfriend mix was maybe the most naive but the most tangible for everyone. We ended up using elements of all of them.”

Joe Grass and Eric Lawrence played pedal steel on the record, while Sam Goldberg makes a vocal cameo, as did an unsung local singer that Kent feels is essential to his music.

“I had the pleasure of having Angela Desveaux come and sing on a song again. Her vocals to me are just the best — she should be touring the world, but she’s not at the moment. It’s sort of hard singing a harmony with her ’cause she’s a way better singer than me, but I had to have her on the record. That would be my one stipulation: every record I ever make has to have Angela singing on it.”

Though Habitat is launching now, the record was in the can as far back as the summer of 2012.

“Sometimes timing isn’t on your side,” Kent says, revealing that Sunfields only recently signed to a label (the Montreal-based Exit Sign Music, founded by Tricky Woo alumnus Andrew Rodriguez), and named their album and its songs.

“We were all totally at a loss, to the point where it became a problem — it was a mental block for me,” Kent says. But finally, the band’s guitarist Phil had a revelation, coming up with Habitat, a title that immediately felt right.

“I can see it right now; I’m in the Old Port,” Kent says, referring to alternative housing structure, where an aunt of his lived in the ’70s. But while it does conjure up iconic Montreal architecture, Habitat is really about the broader idea of home.

“That’s definitely where it resonates more for me. I still dream about my mom’s house that I grew up in, and I’m definitely a homebody — it’s where I like being best.” ■