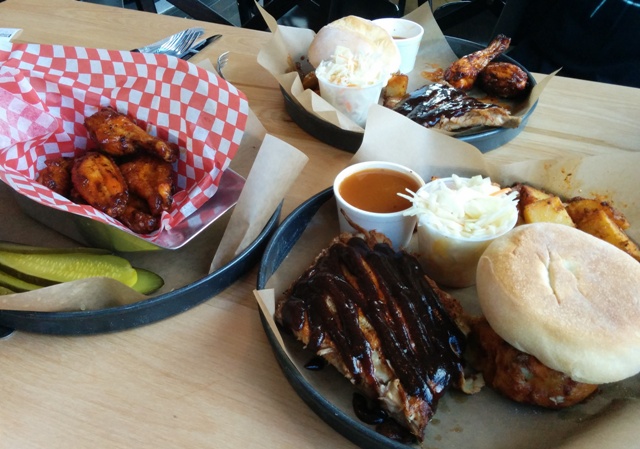 There is neither mercy nor middle ground for failure in the restaurant game on the blocks along Notre Dame between Atwater and Workman. Succeed or be covered in scaffolding by either bank or new business owner.

Restaurant St-Henri finally lost the grease wars to neighbouring fast-food institutions Green Spot and Restaurant A.A., though the latter is currently closed for renovations. Bonne Bouffe de la Caraibe, a gem among Jamaican spots in the city, one day closed its doors. Evoo, which seems to do okay, came along within moments.

Sushi comes, noodles go, and the lunch-counter catering spots that replace them look as if they’re afraid to stay open past dusk. Unless you’re the 24-hour McDonald’s on the corner or a stalwart, wide-reaching delivery spot like old-school Queb-style rotisserie New System, your dining room can become a boxing gym or Peter-Sergakis-owned sports-lotto bar faster than the ref can count to 10.

I’m sure it’s no easy feat to open up a windowed corner spot looking upon such tragedy and triumph day in, day out, but if you’re going to lay claim to the title of Sud-West BBQ and plant yourself square in St-Henri, that’s what you and your customers are looking at, if from different perspectives.

Entering the glass-panelled, wood-and-stool adorned bar-b-queatery for a second time in as many weeks, now accompanied by an accomplished eater and avid meat enthusiast, I noticed again how easily the atmosphere slid from pathos to possibility. But a lot of that may have to do with the fact it was payday, both times, and that the first thing that hits your eye is a huge fridge full of international beers. They definitely have me on the “Sud-West.”

The friendly staff, on their toes with a steady stream of early-dinner-hour customers, moved quick and answered questions knowledgeably as they worked the line-up. People can hover around the counter until it gets too crowded, so if it’s busier, just order, pick a chair and chill. It’s a small place and the service is quick. Uninterrupted radio pipes in a steady stream of rock classics.

My buddy and I both wanted to check out the pork ribs and I’d mentioned I wanted to try the giant wings, which in turn influenced him, but he was also dead set on a quarter leg. We each got menu combos, mine with three wings, and an order of six more individual wings on the side to share. Throw in two Greek beers, a window seat on scenic Green Avenue, and it was chow time.

First, we checked out the chicken. The wings, pre-cooked and tossed in front of you with your choice of sauce, gave off a hint of butcher-aisle aroma. They smacked of produce, my companion would agree. But having gone with a standard Buffalo-style hot sauce done right, after about three wings I conceded to at least enjoying their tenderness and delivered-upon promise of gigantism. My partner, meanwhile, chompin’ on that thigh, marvelled at the crispness of the skin, swearing by it later as the standout of his meal.

That said, the ribs are truly awesome. Smokey and succulent, laced with an easy fresh squeeze of house sauce, I can’t even pretend: I did knife-and-fork it at one point. These ribs hit every spot your pig-lovin’, curly-Q-tailed heart desires.

Our disappointment came on the side. On my prior visit (where I’d had a homerun of a po-boy), I was handed roasted potatoes, a BBQ-style dipping sauce for them, a portion of slaw and a half cob of corn. This time, corn was replaced with a bun, maybe because neither of us had sandwiches, evidently popular and certainly aplenty among offerings.

It didn’t matter because my corn, that day, had been sort of dry and lacklustre.  The spuds have the same issue as the wings. They’re okay, but they lacked oomph and could be a little fresher. And like so very many places specializing in dishes where great coleslaw is a no-brainer, “good enough” is a total letdown.

It would be easy to stand out by putting signature twists on simple fare like these accompanying dishes. So while the value (about $15–$30 per head depending on appetizers, extras and alcohol) is fair and the ambience is warm and light for such heavy fare, it would be nice to see Sud-West BBQ step it up on their sides if they want to be a standout in their southwest storefront. Ca, c’serai pas mal rock’n’roll, ‘sti, and that’s what the hood loves. ■