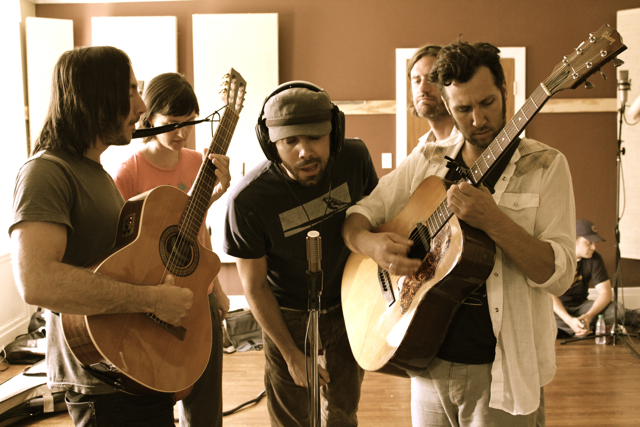 The seventh edition of Montreal’s Folk Festival begins today, Wednesday, June 18 and runs through Sunday, June 23, and it’s expanding this year by giving back to the community that fostered it, and more specifically the borough that funded it.

“The southwest has been a main partner for us,” explains festival founder Matt Large. “It was the first arrondissement to adopt a cultural programming philosophy and put their money where their mouth was.”

Earlier this year, Large and his festival decided to reciprocate, auctioning off items donated by local businesses like guitar atelier Mackenzie & Marr, and folk memorabilia such as autographed Paul Simon songsheets and Bob Dylan records, all to raise funds for their first annual bursary, a gift worth $1,000. Two bursaries have been awarded to a pair of St-Henri high school kids interested in a career in music; one is a pianist who’ll receive some relevant software, the other is a guitarist who’ll get a new guitar, while each will get a website, private classes in their respective instrument and consultation with an industry professional.

“It may be something as simple as how do I put my press kit together or how do I start to get gigs and turn myself into a semi amateur professional musician,” Large says. “They may wanna sit down with a manager, or with the president of a local record company. We’re not big music industry guys but we know a lot of people who are and we’ll be using our contacts to help them. This is a year-long commitment to these kids, at least. We’re continuing the dialogue with them on a regular basis, and will be there for them and help them to develop as much as they can.”

Last month, a green space in Mile End was rechristened to commemorate late local singer-songwriter Lhasa de Sela, who died of cancer at the age of 37 in 2010. With her family’s permission, the Folk Fest bursary has followed suit, naming their new endeavour the Lhasa de Sela Youth Bursary for Excellence in Music.

Large didn’t know de Sela personally, though many of his friends in the folk community did, and respect for her music and the way she worked it runs deep.

“Everything about the way Lhasa made music and how she came here [from Mexico] and stayed and integrated herself into the community and made music in three different languages — it just seemed like a no-brainer fit for this bursary.”

The Folk Festival has had a Lhasa de Sela youth stage since 2012, and this year the programming is expanding to present 15 local emerging bands in the evenings.

Also new to the festival (and the city) this year is a new venue in a corner of the southwest that is slowly gentrifying: Théâtre Paradoxe (5959 Monk), a beautiful former church refurbished by the people who brought the Corona Theatre back to life years ago. The Paradoxe will be the site of one of the festival’s biggest, most appealing events.

“We’ve partnered with the Paradoxe for the Tom Waits tribute,” Large explains, “with Patrick Watson, Katie Moore, Joe Grass, Leif Vollebekk, Notre Dame de Grass, Li’l Andy, the Sin and the Swoon, Peter Mika and the Monday Night Choir. There are going to be 35 people singing an arrangement of Tom Waits’s ‘Time‘ and then each of the artists are going to be leading three songs.

“It’s going to be very collaborative —the Patrick Watson band will be on stage to back a number of the other artists — and it’s not going to be a variety-hour show. We’re really trying to create and curate a special evening. We’re bringing in Patrick’s sound and lighting people, and Joe Grass is the musical director, he just got back from L.A. where Patrick’s making a record. He’s treating it like his little baby. It’s really nice to see a whole bunch of artists in Montreal who have varying degrees of notoriety and success all coming together to collaborate on this thing.”

Part of the proceeds from the Tom Waits tribute show, entitled Heart of Friday Night, will fund next year’s Lhasa de Sela bursary, as will a second auction to take place next year. But if the $40 ticket price is too steep, the festival has no shortage of great free entertainment happening at Îlot Charlevoix, an open-air spot on the south bank of the Lachine Canal (at Atwater), where bands will play on Friday evening and all day Saturday and Sunday, with an “artisan alley” of art vendors and food trucks not far from the stage. As Large explains, the programming is eclectic enough for fans of trad banjo-pluckers and heavy shoegazers to find themselves standing on the same patch of grass.

“I’m an old bluegrass guy at heart, and I’m so stroked that I can bring Frank Fairfield from California. He’s in his 30s but he’s playing super authentic old-time fiddle and banjo music and a cappella singing music. He has a very distinct style and voice, and for us in the old-time community, it’s a coup that he’s coming here.

“In that same vein is one of my mentors, Jeff Davis. He’s in direct line to early 1900s song-catchers Frank and Ann Warner, who recorded a whole bunch of seminal field recordings in Beach Mountain, North Carolina, and all along the Eastern Seaboard. It was their recording of ‘Tom Dooley’ that Frank Prophet sang which eventually reached Alan Lomax’s songbook which eventually reached the Kingston Trio, which started the folk music revival, so there’s really amazing authentic old-time folk there.”

In the interest of folk purism (because I know there are purists in our midst), I had to ask Large about the presence of such a heavy, neo-psychedelic rock band as Montreal’s formidable Besnard Lakes at this year’s festival.

“I’m the president of Folk Music Canada, and I live in the folk music world, and we have these debates amongst ourselves all the time. I’m always going to book people like Frank Fairfield and Jeff Davis, I’m always gonna have bluegrass bands and Celtic bands and Québécois trad bands — ours is a folk festival, but ‘folk’ is written with a small F. It isn’t an anomaly, it isn’t odd for us to have a rock band on there also. At the base, we’re looking for awesome singing and songwriting, and the Besnards fit that bill. We’ve had Plants and Animals and the Sadies play the festival in the past, and that’s when it turns into a little more of a party. I can’t wait for that to happen with the Besnards on Saturday.” ■