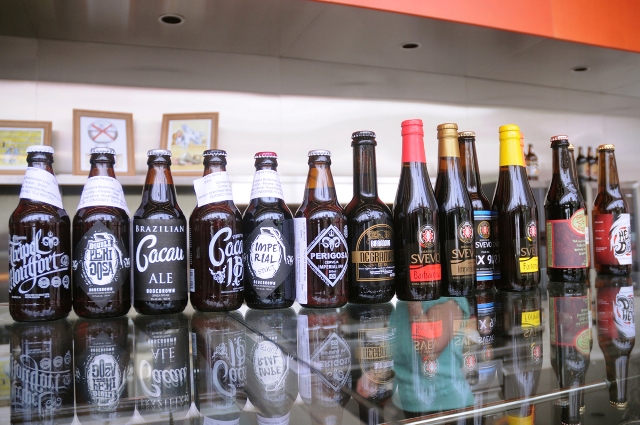 Brazilian brew. Photos by Cindy Lopez (scroll down for more)

It’s not just the World Cup that has gone Brazilian. At this year’s Mondial de la bière – going on now till this Sunday, June 15 – there’s an impressive selection of brews from the country currently hosting soccer’s biggest tournament.

The floor space at Palais des Congrès is still largely controlled by big boring names, as well as the usual shandies and kangaroo sliders, but with 56 different Brazilian beers to try (from 10 different breweries), there’s reason for even the most seasoned and cynical of Beerfesters to swing by this year.

For year-round beer consumers, the big news at Beerfest was that Beau’s All Natural Brewing Co., from border buddy Vankleek Hill, Ontario, will be coming to Quebec in February 2015. The all-organic microbrew is considered one of the best in the country, and if you have a beer connoisseur in your life, chances are they’ve made the trek to the small town for a pick-up. If you’ve never had their Tom Green milk stout, give it a try – they have their own booth with nine different beers.

If you plan on hitting up Beerfest this weekend and find yourself surrounded by the same old kiosks, here are a few unfamiliar brews that percolated my taste buds:

My recommendation would be to start with the Bodebrown Cacau IPA. It’s an American-style India Pale Ale from Brazil that really stands alone in terms of taste, which can be attributed not only to the cocoa they use (hence the name), but the slight fruitiness as well.

Another highly unusual concoction I taste-tested was Red Horizon, from Norway-based Nøgne Ø. It’s a fruity beer made from sake yeast from Japan, and it’s also 12.5 per cent alc/vol. From the U.K., the St. Austell 1913 Original Stout was light and smoky. I sampled an Italian chili pepper beer called Amiata Helles Diablo, which didn’t overpower in terms of heat or taste, but once I was done, my tongue felt as though it had just munched on a few hot peppers.

When it comes to those vaunted Yankee craft beers, My Antonia from Dogfish Head Brewery in Delaware attracted a big crowd during the morning taste test (it didn’t hurt that it came in a striking bottle).

As always, admission is free, but in order to imbibe you must buy drink tickets, which cost a dollar each (samples require anywhere from two to six tickets). There’s plenty of food as well, and food trucks in the outdoor area.

And go early — all the good beers will be gone by Sunday. ■

You can also peruse the beer list on this helpful PDF