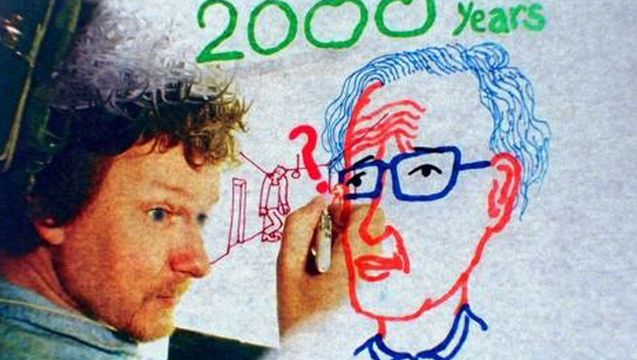 Is the Man Who Is Tall Happy?

Making its Quebec premiere this week as part of RIDM’s Docville series is Michel Gondry’s Is the Man Who Is Tall Happy? The documentary, hand-animated by Gondry, is based on interviews he conducted with Noam Chomsky, the famous American linguist, cognitive scientist, activist and philosopher.

The film dips into some of the main principles or ideas from Chomsky’s work but Gondry also directs conversation to more personal matters: his childhood, education, his children and his relationship with his wife Carol. The film offers a decidedly intellectual experience, paired with Gondry’s creative illustration choices, which bring some clarity to complex ideas and theories but also entertain.

I spoke to Gondry earlier this week about Chomsky, and the long process of animating the film by hand.

Kayla Marie Hillier: What sparked your interest in Noam Chomsky?
Michel Gondry: Many ideas spoke to me but what he had to say about how everyone on Earth should reach their true potential, that spoke to me very strongly. And of course his scientific knowledge and what he brought to linguistics — that he brought linguistics into biology — was something that really interested me as well.

KMH: Did you read his books first or check out his films?
MG: I watched his films and then I did some research on YouTube and then I read some books. But the books on linguistics are very hard to go through and that’s one of the reasons why I wanted to do this film and talk about the science more than the politics.

KMH: How long did it take to complete the film?
MG: It took me about three years, but I was doing another project in the meantime. So it’s hard to say exactly.

KMH: You explain this a bit at the beginning of the film, but why use such an arduous process to animate the film?
MG: I think scientific documentaries are quite cold usually. My goal wasn’t to try to explain or demonstrate but to try and combine what I’m good at, drawings and animation, with Noam’s knowledge and see what would come of it.

KMH: How many interviews did you do with Chomsky?
MG: I had met him several times, but when we started to do interviews, we met four times. There were two big sessions with five or six months in between so I could show him the work in progress.

KMH: Do you know if Chomsky enjoyed the film?
MG: I think he really liked it. He saw it three times and I know he went to the premiere of the film although I wasn’t aware at the time. I think he liked it because it’s my work and my craft, he doesn’t have to look at himself close-up for two hours. He’s actually much more sentimental than people believe. He was very touched that I spoke about his wife and the animation that I did about him and his wife. He liked the inquiry — the fact that I’m very candid. I think he appreciated that as well.

KMH: Did you prepare for the interviews ahead of time or just let the conversation happen organically?
MG: The first few questions I had in mind and then I went with his answers. It was difficult sometimes because he can speak for a half hour so I’d have to stop him and get him back — to bring him back to his personal life. And I would ask him about what I didn’t understand. It’s quite amazing to have this type of scientist — when you read the book you always wonder and you have questions that you don’t have the answers for. You can read the whole book and still have questions at the end. So when you have the guy in front of you, you can ask all the questions that you are wondering about. And that’s what I did.

KMH: Once you completed the film did you unearth a few more queries that you wished you would have asked him?
MG: There’s always more questions. Sometimes I’ll even send him an email, even now, with questions and ask him for answers. He’s very good with email.

KMH: Can you let us know about any current projects that you’re working on?
MG: I’m gonna shoot a movie in one month about two French teenagers, 14-year-olds, who build their own car and who go on a journey across France. That will come out probably in the spring. ■

RIDM, in collaboration with the Concordia Student Union, presents Is the Man Who Is Tall Happy? at Cinema Excentris (3536 St-Laurent) on Thursday, June 26, 8 p.m., $11.50