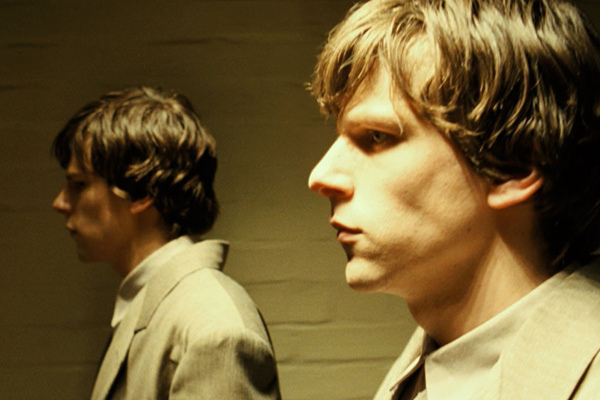 As far as I’m concerned, Richard Ayoade can do little wrong.

From his amazing-awful (amazeful? awezing?) horror/drama parody series Garth Marenghi’s Darkplace, to his portrayal of the nerdy and strange Maurice Moss on The IT Crowd, to his coming-of-age dramedy and feature-length debut Submarine, he’s never disappointed.

With sharp, dry wit often associated with the English, Ayoade seems to have a knack for telling complex stories and wrapping them up in Wes Anderson-esque packaging. The Double is no different, as it is arguably one of his most daring and ambitious projects, stylistically speaking.

The film is based on Fyodor Dostoevsky’s novella The Double, and although I personally haven’t tackled that title yet, from plot synopses it sounds like Ayoade didn’t stray too far from the original source material.

Simon James (Jesse Eisenberg) is a timid and hard-working young man employed as a clerk at some government agency helmed by a bunch of septuagenarians. As he is quite quiet and unassuming, he travels through his lonely life almost unnoticed.

His mother (Phyllis Somerville) is slowly losing her mind at a lax care facility and his love interest and co-worker Hannah (Mia Wasikowska) — who he makes excuses to visit daily and who also lives across from his dreary building, allowing for telescopic spy/stalking — doesn’t seem to take much note of his existence either.

As if this wasn’t bad enough, Simon’s new co-worker James Simon is his exact look-a-like, only he embodies every personality trait that Simon lacks: James is charismatic and confident, and somehow no one seems to notice that he’s not the only one with that charming face.

Without giving away too much, the pair do become friends but James isn’t exactly what he seems.

The film is commendable because it doesn’t drag on or tie things up with perfect bows. It’s concise and there’s very little that I could have lived without. The use of sound is jarring and yet perfect for this highly stylized old-timey environment. I’ve always had a soft spot for Eisenberg (maybe because of The Squid and the Whale or the short-lived series Get Real), but I feel like he’s really allowed to shine in this role and you never lose sight of which character he’s playing, be it Simon or James. Ayoade also worked with long-time collaborator Andrew Hewitt on the score, which is definitely worth tracking down.

I could make arguments that the film is a comment on post-industrialized society, or dip into the ideas that Dostoevsky was clearly digging at with his book. I could wax poetic about identity and confidence and how charisma at times means more than actually getting shit done — but at the end of the day I simply enjoyed the film end to end. It felt faultless — that’s why you should see it. ■