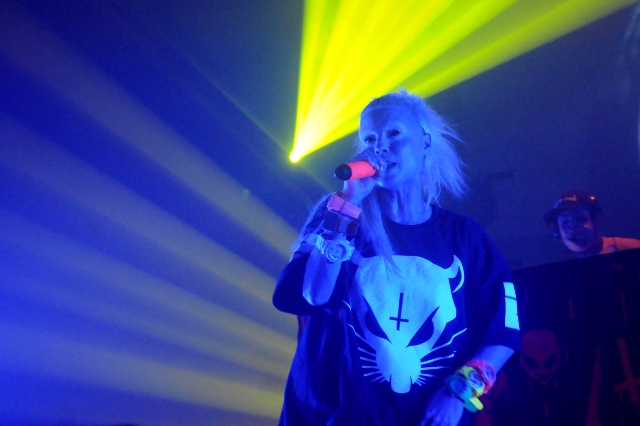 On Friday night, when the centre of the city was overrun by tourists and gripped by Grand Prix activity, with the nearby Place des Festivals already cordoned off in advance of les FrancoFolies, Metropolis was the site of a very different show.

Though they may rival the juvenile spirit of some of the F1 shenanigans, South African sideshow Die Antwoord (Afrikaans for “the Answer”) are very aware of how grotesque, trashy and base they are — prior to this project, MCs Ninja and Yolandi were involved in hip hop satire, suggesting that they may have fallen upon their winning audio-visual formula accidentally. Do their fans (generally alt 20-something stoners, judging from the look and smell of the Metropolis crowd) realize how tongue-in-cheek this act may be, at least at its root? It doesn’t matter. They like the freak show and the maxed out sound, two things Die Antwoord do pretty well.

Yolandi looks like a creature spawned by an Aryan elf and a monster that crawled out of an Aphex Twin video. Ninja is all sinew and ink and swinging junk, with a face that’s sinister as fuck. They emerged in massive hoodies and pants, with Yolandi slowly stripping off her oversized outfit to reveal her tiny form in the skintight clothes she wears in all of Die Antwoord’s videos — her body is a perfect match for her childlike voice.

The pair strutted across the stage and up and down the large lit-up cubes that held the DJ at its centre, firing vocal missives over equally assaulting music. Often called dance-rap or rap-rave, their sound also bears traces of dancehall and other no-budget synthetic “world music” that at least intermittently make it more interesting than that of your average EDM act.

Even as they pulled out one of the most asinine stage props I’ve ever seen (a giant inflated Casper (the Friendly Ghost) with a mammoth boner), it was hard not to think about the ideology that Die Antwoord has been floating since they emerged from the ooze in 2009. Yeah, a lot of their lyrics are about sex and drugs, with the usual self-aggrandizing MC swagger, but a fair number of their tracks (and videos) slam the rich and the pretentious. To put it in South African terms, they rep “zef,” which roughly translates to working class with costume bling and a big appetite for trash.