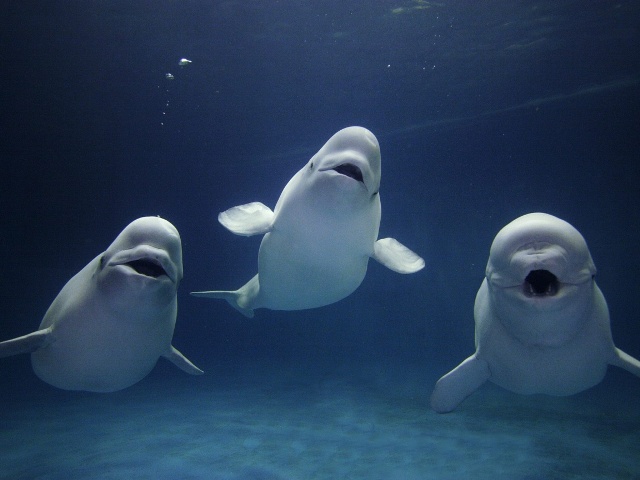 Place your bets! That’s the message whale experts are relaying to Quebecers these days, warning that the construction and operation of the proposed supertanker port by TransCanada would be fatal to belugas of the St. Lawrence.  The port project is located in the waters adjacent to the small coastal town of Cacouna, an area currently known to be a beluga nursery. In honour of this epic showdown, here’s the skinny on the match-up:

In one corner, the emblematic white whale (#beluga), with a declining population currently estimated to be below 900. This cetacean, which has been around these parts for approximately 8,000 years, is the only one of 13 whale species that hangs out in the St. Lawrence, and sticks around all year. The chubby mammal has been designated as “threatened” and uses its critical habitat near Cacouna during the spring and summer months to feed and give birth to little ones.

In the other corner, the challenger is a corporation best known for being blocked by Obama from bringing the Keystone XL tar sands pipeline down to the U.S. (#NOKXL). The company has set its sights on Quebec as the land that will let it build the largest pipeline in North America, a pipeline capable of pumping 1.1 million barrels of crude oil per day. After hitting a wall of opposition down south and out west, the Energy East pipeline by TransCanada is seen as the great white hope for expanding tar sands production.

RUMOUR HAS IT THAT THE FIGHT HAS BEEN RIGGED

If you weren’t aware by now, the Harper government is playing favourites, and has a major crush on Alberta’s tar sands. Despite the fact that this massive project results in huge CO2 emissions bound to screw over future generations, our elected officials in Ottawa are doing everything to facilitate its expansion.

As most of us know, the best way to pick a winner is by changing the rules of the game, and Harper & co. have been crazy busy doing just that. At the request of the oil industry, the government has changed a number of laws that were getting in the way of building pipelines. Such changes took place when omnibus bills were adopted in 2012, resulting in the cancellation of almost 3,000 environmental assessments and the reduction in the number of protected rivers and lakes that from approximately 2.5 million to 159 — that’s right: one hundred and fifty nine. If this shit wasn’t so tragic, it would be funny.

So, things don’t look too good for the beluga whales, but there’s some fight left in them. Environmental groups have just pushed for an injunction to stop work on the port and that has made TransCanada go back to request a new permit from the provincial government for the preliminary work they intended on doing this summer. If you’re betting on the beluga, now might be a good time to let your government representative know. Standing up for whales would help to ensure that we see a fair fight. ■