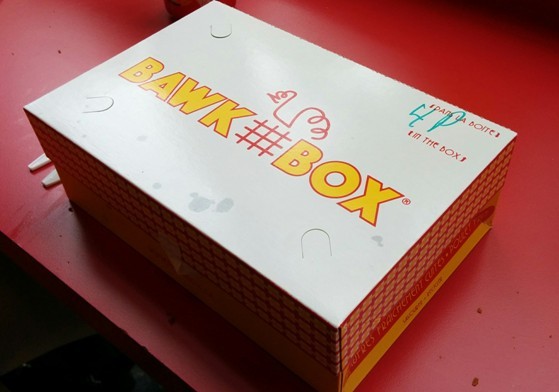 Are we drooling yet?

Montreal has its fair share of quality chicken joints and brunch places with waffles on the menu, but unlike our American counterparts, we have little experience in combining the two together to form one fattening, slightly breakfast-y meal.

But for the past two weeks, Bawk Box (921 St-Catherine E.) has been serving the soul food pairing in the Gay Village, from where a Five Guys once stood.

Upon entrance, one can’t help but notice the remnants of Five Guys décor everywhere, like a Templo Mayor of fast food branding. Like the red checkered burger chain, the menu at Bawk Box is purposely limited. The orders are neatly placed into a nicely designed box I’m sure they’re hoping one day induces the same Pavlovian reaction as a St. Hubert takeout box.

A solo Bawk Box includes fried chicken (two or four pieces), waffles, coleslaw, a drink and your choice of sauce. The option also exists to buy items separately, or in a larger family format. Going with just waffles opens up a different set of more appropriate sauces. 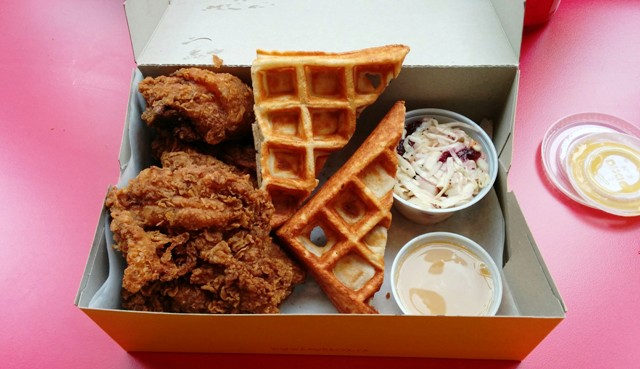 My dining companion and I shared a four-piece box, and selected the maple mustard as our sauce (the other options being signature, honey chipotle and brown). At $11, it was quite affordable. I was surprised at the moistness of the chicken, as well as the crunchiness of the batter. The chicken was all textures, though, as it was lacking in taste – as if Colonel Sanders had dropped two or three of his herbs and spices on his way to the kitchen. The sauce – which isn’t all that different from honey mustard – provided some needed kick.

At the order counter, racks upon racks of freshly made waffles stare back at clients. Imagine my surprise when I opened my box to find only two measly triangular half pieces included. No need to be stingy with the waffles when you’ve made it abundantly clear that there are enough of them to feed a small army of Circus partygoers. There was ample space in the box for another two pieces. They tasted fine, but it was a small sample size.

The coleslaw was too sweet a surrogate for collard greens.

Misgivings about the combination aside (I’m sure Montreal’s Belgian community considers it heresy), Bawk Box does the dynamic duo fairly well for a weeks-old start-up. It won’t supplant your favourite chicken joint, though, and the waffles might not be an enticing enough draw. Then again, if you’re craving a meal that includes both, don’t balk at what Bawk has to offer. ■