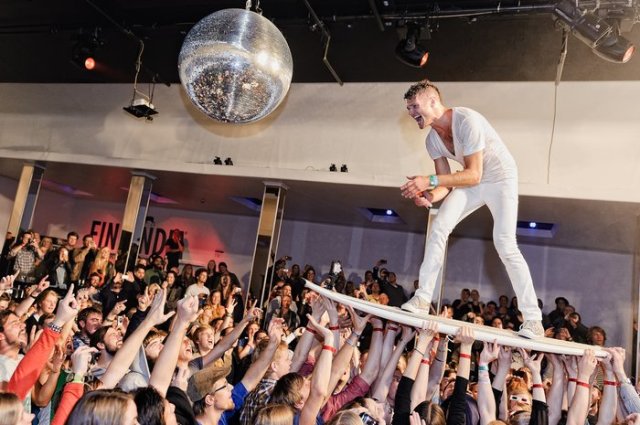 There is no party quite like a Rich Aucoin party.

The Halifax-based musician and showman returns to Montreal this week as the face of this year’s edition of the One Man Band Festival, a gathering of over 50 solo artists who produce a band’s worth of sound, in vastly different ways — see our article about the festival here.

Aucoin’s M.O. involves pre-recorded and live audio, as well as streamers, confetti and glitter guns, a surf board, a parachute, group choreography and video. Aucoin introduces every show with a rousing montage that combines clips from viral videos and shout-outs to local people and places — yes, a unique intro is produced for every show.

“Before making the intro, I’ll look at the Facebook to see who’s coming and find out about the history of each city, as much about the place as possible,” says Aucoin. “I do it ’cause it’s interesting to learn about that stuff, and going to the local places that people go to and trying to experience it as much as possible, I feel — at least for that one brief moment — like a part of their community. That brings on a community mindset before the show, which is nice, to have people not only thinking about what I’m doing but thinking  about all their friends and the place they live in.”

Although he’s sometimes scaled his touring habit down to a “weekend warrior” schedule, Aucoin has been playing shows almost non-stop since the release of his 2011 album We’re All Dying to Live. This fall, local label Bonsound will release his new LP, entitled Ephemeral, and just as his 2007 EP Personal Publication was structured as an alternate soundtrack to How the Grinch Stole Christmas, this record synchs up to a 1979 claymation adaptation of Le Petit Prince.

“I wanted to start it the way the last record ended, with a big choir,” Aucoin says. “So two summers ago, I recorded all the festival audiences I played to. I taught them this one part and brought a condenser microphone out into the middle of the stage and I got the  whole crowd to sing this part. I stacked one on top of one another so the record begins like a soccer anthem, with a choir of 20,000 people, cause it was 12 shows of between 1,000 and 4,000 people. It’s pretty fun.”

Have a taste of Ephemeral below. See you at the show. ■