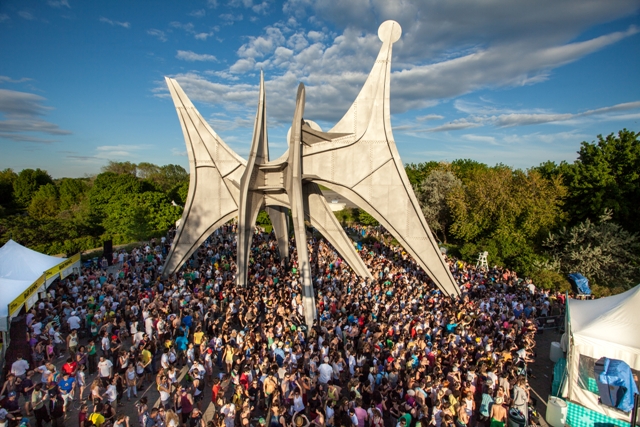 Piknic Electronik has become the kind of cultural institution that perfectly encapsulates the joie de vivre spirit of Montreal summers. EverySunday afternoon for the past 12 years, people have been gathering on the north shore of Île Ste-Hélène to dance, under the shadows of a giant abstract sculpture, to a mind-bending array of beats produced by a host of DJs from both Montreal and environs further afield. This setting, which provides a jaw-dropping view of the city at sunset, may be unique to Montreal, but an event like this just doesn’t seem like it would work in any other Canadian city — like Toronto, for instance, where stodgy city councillors have recently flip-flopped over the idea of holding electronic music-based parties on city property.

Piknic (alongside parallel winter party Igloofest and international off-shoot Piknic Barcelona) has grown up a lot over the years, even if there were a few bumps along the road. In years past, it was not uncommon to see people arriving directly from the afterhours clubs looking worse for wear and packing little more than drugs and booze in their picnic baskets. Since then, a few organizational tweaks (such as ending the much-loved but frequently abused BYOB policy) has brought it back to being the the kind of fun, family-friendly event that delights young and old music lovers alike. And despite the growth in popularity of both the event (Piknic hosted over 75,000 people during last year’s season) and electronic music in general, the organizers have stayed true to their aim of providing a platform for underground artists, such as Kode9 and Jimmy Edgar, who represent a vast cross-section of different music sub-genres and scenes.

Ahead of Piknic Electronik’s opening weekend two-day double header, I spoke with event co-founder and head programmer Michel Quintal about the memorable moments and logistical challenges of the past dozen years.

Michael Sallot: When you began, you declared your mission to democratize dance music by taking it out of dark nightclubs and making it more accessible. Twelve years later, do you feel like you have accomplished that?

Michel Quintal: I think so. Twelve years ago, you would never hear electronic music in a TV ad. I think people are more and more aware of what is happening. Also, I think we’ve helped people discover really amazing underground, local artists that make Montreal what it is. They have their weekly or monthly events and they’re bringing people to the bar where they’re playing, maybe 100 or 200 people and to me, that is part of what Montreal is. We have a lot of DJs here and a lot of really good ones. Piknic gives them the opportunity to play in front of a couple of thousand people, and that brings more people to their events after. To me, it’s almost a way to say thanks to them.

MS: Have you ever felt pressure to cater to that segment of the market that wants to see more mainstream artists and DJs?

MQ: Sometimes people complain on our Facebook page, like, “Where are the big headliners?” That’s not what we’re doing. If you want to see those EDM [electronic dance music] artists, you just have to go to all those other festivals that are booking them. It’s not that I don’t respect that kind of music but.. well, I don’t! (laughs)

I went to Coachella and saw Skrillex and those guys and they were the shittiest sets I have ever heard in my life! I don’t understand how people could listen to that. I respect that a lot of people came to electronic music in the past few years through all those big names, but maybe you’ll start with that and then move onto more interesting and artistic stuff at some point. We’re not Ultra Miami but we’re not the MUTEK festival either. We are kind of in between and we don’t go for those big acts that are not interesting. It would probably sell out Piknic every weekend but it would probably not be what I want, and most of the people that have been coming to Piknic in the last couple of years would probably not like it.

The way Piknic is done, there are people telling me, “Oh I don’t listen to electronic music but I go to Piknic and I dance and have fun, and suddenly I find a DJ I like and I start listening to it at home.” There is always something that is going to please you and we always have two stages that are usually very different.

MS: How do you think the Montreal scene has changed since you started?

MQ: It’s changed a couple of times, actually, during those 12 years. 2003 was not the best days for electronic music. Up until 2008 maybe. At the time, there was a lot of drugs. A lot. People were just there to party hard and we could see that. At Piknic, we had those years, too. Around 2009 and 2010, we had to deal with a lot of people on drugs. The music was more of an excuse to party, but it’s come back to people coming to really enjoy music.

MS: What have been some of the challenges you’ve faced since Piknic has grown in popularity?

MQ: Obviously with more people, you need more security and the logistics are more tight. Five years ago, we were just getting prepared. We have a lot of people that work for us now and they’ve really grown into professionals.

We’ve been working a lot on Barcelona and we’re trying to get it going in other cities. Hopefully that will happen next year. There are a lot of possibilities around the world. In Barcelona, in the first year we had 2,000 people and now it’s already as big as it is here.

MS: Do you ever get noise complaints?

MQ: A little bit! It’s strange. Sometimes, depending on the wind, people in Saint-Lambert will make some complaints but we finish at 9:30 p.m. so it’s not so bad. When we have them we take it seriously and try and figure out what happened. We respect the limitations that the city asks of us. It was way worse three or four years ago. The last two years have been pretty quiet!

MS: What have been your most memorable Piknic moments?

MQ: There are two that come to mind right away. In 2004, at the start of our association with MUTEK, we had a Piknic on the Sunday during the festival. We had a few artists [booked] who were not really well known. On the Saturday night before, we were at a restaurant and we happened to be sitting right next to Matthew Herbert! We started chatting with him and finally he came and did a three-hour set the following day. Crazy!

Also, and I don’t know why, but it seems like the shitty weather sometimes brings the best Piknic! I think it was three or four years ago, it was a really nice sunny day, and all of a sudden it started pouring rain. We had to stop the event with Josh Wink [who was DJing]. It was really dangerous; there was lightning and stuff so we stopped for about 15 minutes. People were booing and leaving. Finally, it just stopped raining and we started the music back up and that was probably the most intense half hour we have had at Piknic over the 12 years. When it’s raining like hell people just dance like there is no tomorrow! ■

There will be an additional Piknic on Monday, May 19, same time, place and price