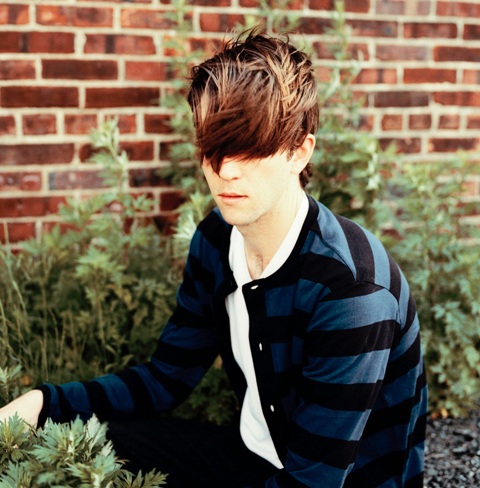 How do you know Owen Pallett? As the Polaris Prize-winning artist once known as Final Fantasy, who whipped up orchestral urgency behind lyrics inspired by such wondrous realms as the world of Dungeons and Dragons? As the solo singer-songwriter behind the 2011 record Heartland, where he rebranded himself to get Square Enix off his back? As a limb of Arcade Fire, whom he’s played violin with and arranged orchestration for since the early days? Perhaps, for you Toronto people out there, as the leader of defunct trio les Mouches, or as a sideman with a succession of other acts like the Hidden Cameras, Royal City, Gentleman Reg and Jim Guthrie? As a remixer and arranger of acts like Grizzly Bear, Beirut and Björk? Or as the Academy Award-nominated composer of Her?

No matter where you’ve seen or heard him before, nothing will get you closer to Owen Pallett than his excellent new record, In Conflict, half of which was made with a three-piece rock band, the other half a more electronic/orchestral creation, all of it five years in the making. It will finally be released by Secret City Records on May 27.

Ahead of his local pre-launch show at la Sala Rossa this Friday, I spoke to Pallett about the inner torment behind this record, what it’s like being on a five-star tour and why he moved to Montreal.

Lorraine Carpenter: So when did you become a permanent resident here?
Owen Pallett: I’ve been in Montreal since January 2013, and I was in town most of last year but of course I’ve been on the road [with Arcade Fire] for the last nine months.

LC: Were you disenchanted with Toronto or did you have more practical reasons for relocating?
OP: It wasn’t so much disenchantment as much as a completed relationship. A large part of it was having had a wonderful time in Toronto in my 20s, and that just made everything seem sour in comparison.

But Toronto’s suffering from New York syndrome right now: everything’s just becoming too expensive and the quality of life is not improving.

Maybe this is stupid, but the food has gotten really bad (laughs). There are so many new restaurants opening up, mid-price to upper-mid-price restaurants that are just so terrible.

It was always a thing that I used to love talking about in up-selling Toronto to people: “Oh, the food is so good and so cheap and so awesome.” But now everybody’s eating at places with tiny, over-salty pieces of fish, or whatever.

I grew up with cold dry winters and lots of snow and when I did the test-run of living in Montreal in 2013, just having snow on the ground consistently for two months, I was like, “That’s it. I’m moving here.”

It’s worse in Toronto because it’s never quite cold, it’s always damp and shitty and slushy.

I love the cold weather. It creates good social environments, and a feeling of having to protect yourself against the elements. Also, I love to ski.

LC: So I’ve read that you had a false start writing the new record, that your experiments with writing more personal, observational lyrics didn’t work out.
OP: It took me a while to figure out how to do it. I was going back and picking out stuff that had happened to me — something you might do in therapy, talk about really strong memories and break them down — and it just read too much like therapy. They were just bad songs, not good songs.

The thing that came out well from that more automatic experience was that I got an over-arching theme of the record, the idea of liminal states. I was feeling that the stuff I’d written had been written by completely different people.

LC: Was there a reason that you chose this time to explore these issues?
OP: There was kind of a bit of a motivating factor: between the end of the summer 2010 and the beginning of the year 2011, I was going through a really difficult time mentally and I was feeling like there was a lack of something in my life, which was art that dealt with what I was feeling.

You always hear about so-and-so making their mad album or their crazy album but they weren’t really providing me with any sort of real respite. But films like Persona by Bergman, Melancholia by von Trier or Synecdoche New York by Kaufman — those  movies, I feel, were meant to be about that experience, about being in that place. There was a desire in myself to make a record reflecting that space the way those films did.

LC: How did you feel about being nominated for an Oscar?
OP: Um, I’ve got teflon around my ego, so oftentimes a lot of that stuff never penetrates, but it seemed to be really good for my friends and family. I got a lot of positive response from them.

The best part of  the whole experience was a concert that was put on where the five nominated composers conducted excerpts from their score. I was able to hang out and chat with the other nominated composers and members of the academy, who are all really venerable composers and songwriters. That experience was amazing, but the awards ceremony and nomination, I’m more interested in from a careerist perspective.

LC: How’s the [Arcade Fire] tour going?
OP: It’s up and down, to be honest. The shows have been really amazing and I’m really happy to be a part of that. Every night, without fail, no matter what mood I’m in, I always get cheered up by a couple of songs we do: “Tunnels” and “Here Comes the Night Time.” But it’s tricky for me, mentally, to be involved in a project where I’m not only anonymous but almost invisible. It’s part of the reason why I was excited to take on this gig — I was hoping that having a level of anonymity with my work would reset my mind, my attitude towards my solo project, and it definitely has done that, but there are days touring with the band when I feel a little invisible.

I mean it sounds ridiculous to say so — I’m not going to pretend this is a tough tour. Most of my tours are tough tours, with 10-hour drives during the day, to a Travel Lodge, if I’m lucky. I’m talking to you in a five-star hotel, and I’m going to have room service later. So it’s not tough in that regard, but there’s a lot of mental difficulty that comes along with it that you wouldn’t anticipate. It underlines something I’ve believed for a long time: throwing money at a problem does not make it better. Touring is tough no matter what your budget is. ■