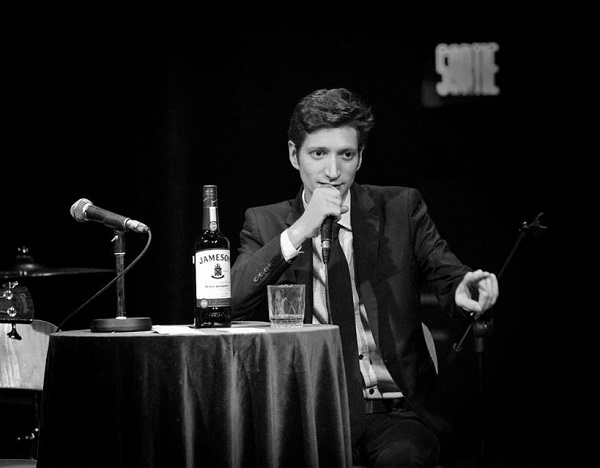 Everyone loves a good story.

If you’ve known someone long enough, you get to know their go-tos, their ridiculous, borderline unbelievable tales that they tuck away as trump cards waiting for the appropriate moment to be played.

These memorable anecdotes just need a little prompting to be told, and Keith Waterfield’s Life Lessons has created the perfect outlet to share some of these heartbreaking, surprising or side-splitting stories with an audience.

On Saturday night, every six to seven weeks at Théâtre Ste-Catherine, Waterfield and co-host Leighland Beckman (Aural Turpitude) — fueled by liquid courage — bring four guests to the stage to share their tales related to a unique theme chosen for the night, in front of a live audience. The result is unpredictable but extremely entertaining. (Personally, I’d argue that it’s one of the most reliable choices for entertainment in the city.)

I had a chat with Waterfield earlier this week about Life Lessons, the upcoming edition of the show and his plans for the future.

Kayla Marie Hillier: How did Life Lessons With Keith Waterfield start?
Keith Waterfield: I was producing a bunch of different comedy shows and I was always looking for another concept show. I was talking to Gerard Harris and he was telling me about somebody that he knew and I gave him advice on this person — but it was really terrible advice. And I signed it: Life Lessons With Keith Waterfield. And he wrote back, “Now there’s an idea for a show.” And I said, “You’re right!” And within four weeks we did the first one. Gerard was on it and DeAnne Smith and Holly Gauthier-Frankel — it was a lot of fun. Those are the people I work with the most: Gerard, Holly and DeAnne. I feel like they’re good luck. And my co-host Leighland Beckman has been a really good friend of mine for many years.

KMH: How did you meet Beckman?
KW: We met in Kingston. I think we both had mutual friends when we both lived in Ontario. And then we started trying to do short films together, these really ridiculous, student, black and white, strange short films. Watching them now is very embarrassing.

KMH: How has Life Lessons evolved since that first show?
KW: One thing that we’ve done is we meet with the guests beforehand and they give us a glimpse of their story. They don’t really tell us everything, we just want to know the beginning, middle and end. Leighland really likes to keep me in check. So if we go off on this big long tangent, Leighland will look at me and say, “I believe we were talking about this,” and then the person can go, “Oh, yeah, there’s an audience.”

KMH: Do you actually get sauced every time?
KW: That was one of the first concepts of the show. We thought it would be funny if everybody was really drunk and just spilling their guts with liquid courage and confidence and all that fun stuff. In that first show, it quickly turned into a little bit of in-fighting. Gerard and I got into a little argument, Holly heckled me from the back of the room — we just noticed that the alcohol needed to be toned down a little. We still include alcohol — it used to be a bottle of whatever booze the guests wanted — now it’s just a couple of things.

KMH: So what are some of the themes that you’ve done? The first was bad relationships —
KW: We had terrible employment situations, we had collaboration which pulled out some very interesting stories. We had school stories from grade school or high school, stories of bullying or terrible situations within a school environment. By that point, when we did that one, I think we had really hit a stride of getting close to what we wanted. And then when we did the pornography one, which is such a broad topic, I thought we really nailed it. I think we had pieced together a really good show.

KMH: I was at the pornography-themed show and I really liked that not all of your guests were performers or comedians. Some of those guests ended up being really entertaining and open.
KW: Getting the non-performers was one of the things that we wanted to put in because they’re going to be super honest. Not to say that performers aren’t honest, but they’ll always be concerned about their public persona. So the non-performers really let themselves go and we’ve had some incredible stories from people who aren’t performers. Audience members have cried and laughed with them, it’s been a cathartic experience all around.

KMH: What’s your next theme for this upcoming edition of Life Lessons?
KW: The next theme is living situations. There are a lot of fantastic stories that I’ve heard from people who aren’t even on the show. Every time I bring it up, people go, “This one time…” Everybody has that one crazy roommate, terrible landlord and the apartment that had no toilet or something. There’s always some crazy living situation story.

We have Melissa Bull, she’s a writer and an editor and she sent me this one line for her story that just raised so many questions. The sentence that she sent me was: I had a roommate who stole $1,000 from me and shit in the middle of the kitchen floor. And I was like, “That’s great! I need to know so much more about this story.”
KMH: It’s true because, are the two things related?
KW: Exactly. Did she evict him? Was it spite shit?
KMH: Who cleaned it up? What happened afterwards? How does one steal $1,000?
KW: And be so bold to shit on the floor after that. I’m really looking forward to that one.

KMH: And who are your other guests?
KW: Then we’ve got Mike Spry, he’s an author and he just released a book, his third collection of poetry. He’s a fantastic guy, he used to be on a radio show called Kaufman and Spry, I think he still is actually. And then we have Lazer Lederhendler, he’s a translator for Nicolas Dickner who wrote Nikolski and he won the Governor General’s award for translation work. He has quite an amazing story about squatting in Montreal in the ‘70s. And Lucie Lederhendler, who runs Studio Beluga. It used to be a gallery and now they do pop-up events and stuff. A wonderful group that I love to work with.

KMH: You must have a lot of people contacting you with stories relating to previous themes or upcoming ones.
KW: And for that we’ve also started doing a podcast… I call it an audio supplement, because I’m a nerd and it’s not regular enough to be a podcast. And we’re also doing video interviews as well. We’re pretty slow on it right now, we’re still learning.

KMH: There’s an element of camaraderie with fellow audience members that’s pretty unique at your shows.
KW: A lot of times I think when we’re outside of our comfort zones, the idea of talking to someone you don’t know — how do you approach that? Any time that someone says hello to you and you don’t know them, it’s kind of a weird experience. I get socially anxious sometimes, it’s like, “Yes, we’re both riding the metro right now, thus no need to have a conversation.” And I think that’s a sad thing because maybe we should be talking to each other more. So if you come out of a live show, where that shared experience and that energy is live and you walk outside and you make eye contact with somebody and you both found something funny, it’s just an easier — I sound like I’m preaching or philosophizing, I don’t mean to do that — it’s just nice sometimes, I think, to have a shared experience.

KMH: What would you like to do in the future? Do you want to continue to produce shows?
KW: I want to run a theatre I think, as something down the road. I want to own my own theatre and to constantly have it filled with people and different kinds of shows. I’m still not done with the idea of the vaudeville variety show. Holly and I have something really big that we’re planning that’s just gonna be crazy-circus-vaudeville nuts and so after we get Life Lessons settled into its course then we can really get into writing a script for this vaudeville show and making something incredibly unique and bizarre.

KMH: Do you think you’re going to stay in Montreal?
KW: There’s always that question for Montreal comedians and entertainers — they find that it’s a little too small. I would love to make it work in Montreal. I think that Montreal is a great city. It’s the only city in Canada that I would consider living in. And I’m Canadian, so anything outside of this would be very difficult for me. I’m open to possibilities of doing it somewhere else but I haven’t given up on Montreal. It has such a strong culture and such an amazing amount of talented people. Lots of little buildings have yet to be explored for venue purposes, I think. ■

The living situations edition of Life Lessons with Keith Waterfield happens this Saturday, May 10, at Théâtre Ste-Catherine (264 Ste-Catherine E.), 8 p.m., $8/$10

Keith Waterfield is also ending his stand-up comedy night The Laugh Pack at the Segal Centre (5170 Côte Ste-Catherine). The final show is Thursday, May 15, 10:30 p.m., $5