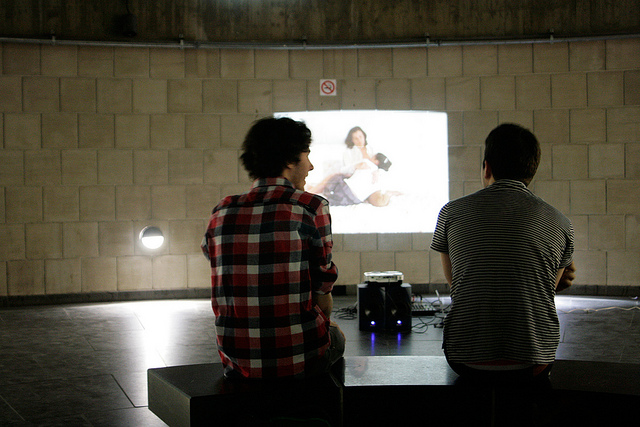 EcransMed, now in its third year, is a film festival unlike any other in Montreal.

The festival focuses on short Mediterranean films, which they screen in outdoor and indoor venues around the city for free. This year’s fest takes place May 10–21 at the Cinémathèque québécoise, MAI and various other locations.

I had a chat with the EcransMed team via e-mail last week about their unique event, their selection process and their inclusive, free screenings.

Kayla Marie Hillier: For anyone who isn’t familiar with EcransMed, how did the festival begin and what is its goal?
EcransMed: It started as an idea to create free screenings of short films from the Mediterranean region. That’s where we had the most contacts with filmmakers who could offer us their films for free in order to maintain the “free screenings” characteristic of the festival. Then, over the next editions, we made more contacts with new filmmakers and distributors in the region who found us to be serious in our organization and were eager to offer us their films for free to sustain that idea.

Our goal is to confirm the vivacity of short film and video art creation, to highlight their position as full-fledged cinematic expression, to promote creations from the Mediterranean region and to stimulate exchange in the short film industry.

The festival aims to reach the broadest audience possible, from all social and cultural backgrounds. The firm decision to provide free screenings at all costs is one way to achieve this goal. Another is to diversify the sites where the screenings are held. In addition to the Cinémathèque québécoise and the MAI, two stable and established venues for cultural activities, we are organizing outdoor screenings in less conventional ways, by projecting films on metro walls and occupying cafés and spaces where local communities meet. Ideally, these projects can expand and lead to directly working in collaboration with these local communities in hors festival screenings that favour less institutional settings.

KMH: What is your selection process like when choosing the films? What types of films do you generally screen?
EM: We try to take our time in the selection process. Over the past few editions, since we have many friends who work in film in the Mediterranean region, they would update us as to who made recent films that they thought were good. So, we would get in contact with them and screen the films to select some for our shortlist. And with every edition, we make more contacts, which is great.

During the selection process we also consider a few criteria such as the balance between the number of films from the north and the south of the Mediterranean, the duration — we favour films that are recently produced and, of course, they have to be from one of the 21 Mediterranean countries.

For this edition, the selection is quite diverse: documentaries, fiction, experimental and everything in between. The program also includes video installations.

KMH: Has the event changed at all this year/have there been any additions since last year’s fest?
EM: We believe that EcransMed could be considered a work-in-progress. The festival is developed from one year to another in all aspects, starting from the venues, the team or even our goals and objectives. Having new members in the team means new ideas and new visions. We don’t really think the festival should be rigid by having only the “one” vision of the founders, but it should be developed. That’s why we try not to link the festival with specific names of founders or organizers.

For the first time, the main program of EcransMed will be screened at a cinema hall which is Salle Fernand-Seguin at the Cinémathèque québécoise from May 14–17. The program also includes a more developed video art program than the one we had before, which will be presented at the MAI gallery from May 14–21.

KMH: Is it hard to keep the screening free and is it important to EcransMed?
EM: Free screenings are one of the characteristics of the event that demonstrate its standards. That’s why it’s important for the festival to maintain this aspect even if it’s hard and getting harder, especially for a festival that doesn’t get funding and has no sponsors but mainly relies on partnerships. The fabulous thing in all this, is the great generosity of everyone involved, from the artists, to the partners, the teamwork and the volunteers. As long as this generosity exists, EcransMed will remain free! ■

EcransMed runs May 10–21 at various locations. For more information, visit their website.