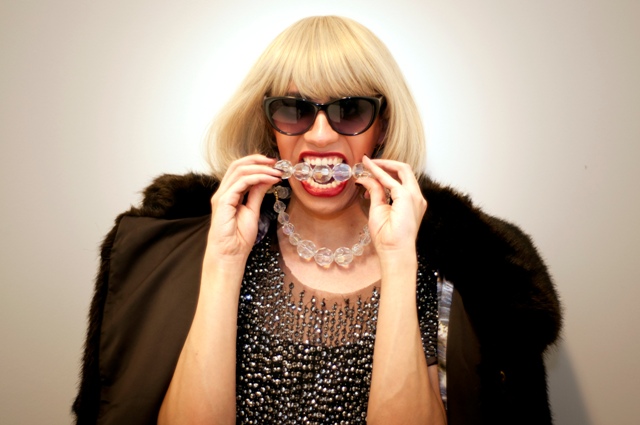 Cult MTL readers voted her into the 2014 Best of MTL poll as #3 Best Comedian and #4 Best Dressed Montrealer. But it was as recently as May 20, 2013 — not even a year ago — that Tranna played her first show at Comedy Works. Her only prior experience performing had been at a friend’s apartment in Montreal as part of the (International) Home Theatre Festival.

“It was basically this grassroots independent theatre initiative that just encouraged people to put on performances wherever they could. So basically turn your home into a theatre… And I really love that idea that you don’t have to rent out a real venue to legitimize yourself. You can just put on a performance in any kind of space,” says Tranna.

After the success of her home theatre show, Tranna gained the confidence to start performing in Montreal’s local comedy clubs. From there it’s been a whirlwind of writing, laughing, and even dancing, about gender identification and sexuality, in a style of comedy she claims is a mix of Margaret Cho and Sandra Bernhardt. This Saturday she presents her one-woman show, I Am No Man — an updated version of the show she first performed in her friend’s apartment, and a culmination of the comedy material she’s been performing and working on throughout the year.

“It’s just kind of like a celebration of my first year in comedy and putting a close to this first year and looking forward to the next year and everything that is to follow.”

She describes the first part of I Am No Man as “very much memoir and looking back on my childhood and seeing the humour in it.” The second part of the show “challenges ideas of traditional gender identification and breaks down the idea of everything having to be separated between male and female, blurring the gender lines and having fun with it in a funny way.”

“That’s kind of where I draw my inspiration from Margaret Cho and Sandra Bernhardt — that there are ways to talk about serious and provocative issues with a sense of humour.”

Those who haven’t yet seen Tranna perform can expect a mix of personal storytelling and theatrics, including singing.

Tranna admits that she is not a trained vocalist, but thinks that this adds to the comedic value of her shows.

“I always sing along with these really bad karaoke backing tracks. But I think that I know how to use my limited vocal talent in a way to tell a story. And a lot of the musical performances that I do are also very comedic. They’re not super serious.”

The stage name Tranna Wintour is of course an homage to the fashion icon and Vogue editor-in-chief Anna Wintour.

“She’s very cold and reserved, which I’m not like at all, but I’m kind of drawn to that element of her personality. I just love her. But ultimately Tranna Wintour is just a stage name, not a character — I’m not a drag impersonator. But who I am on stage is very much the real me, just a little exaggerated, more glamorous and more fearless.” ■